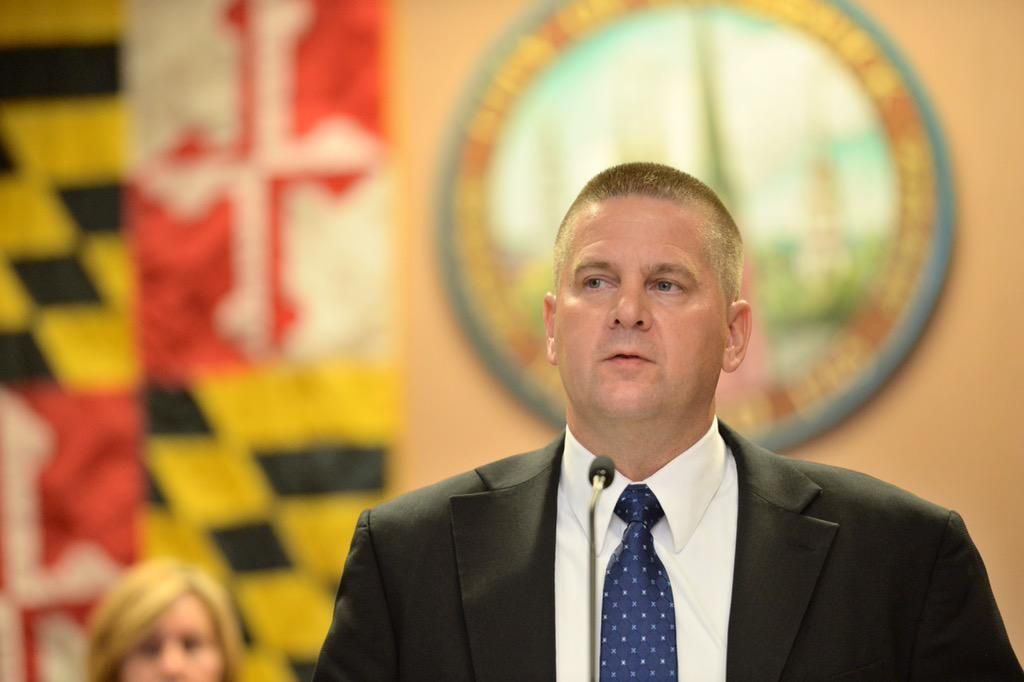 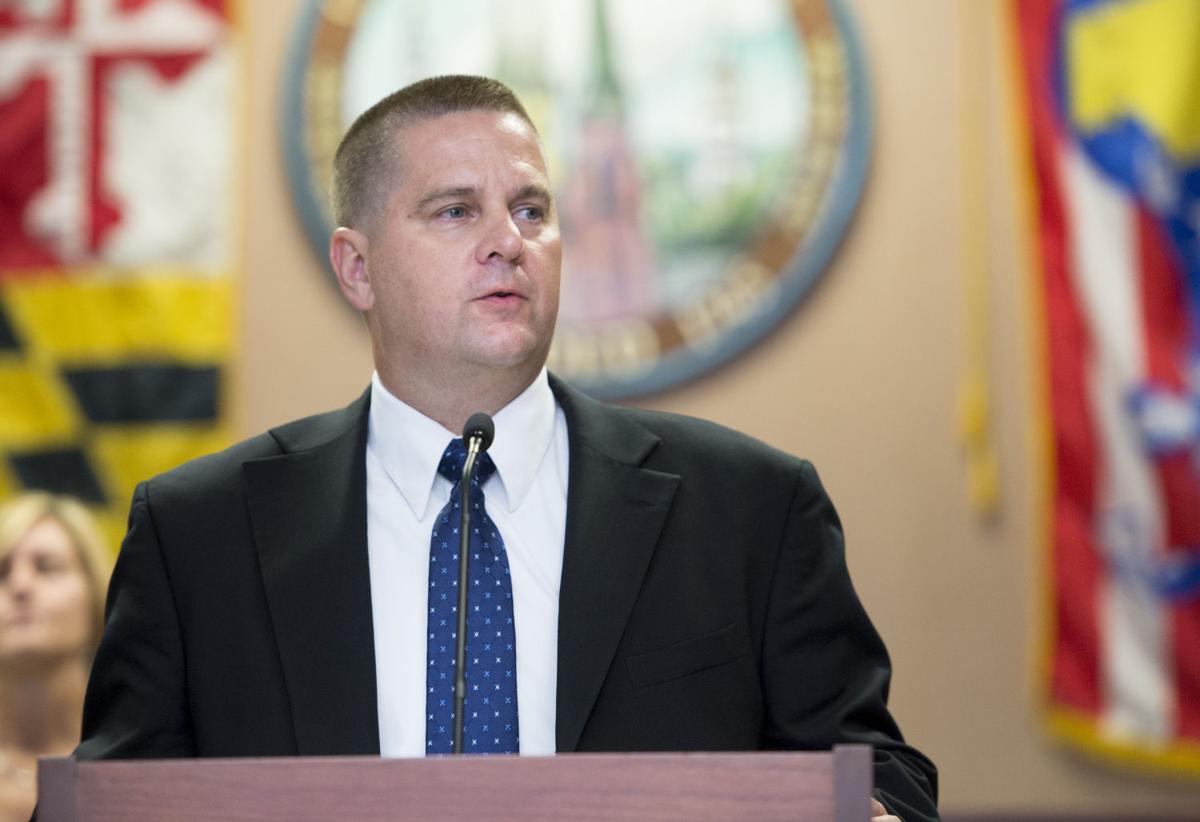 Edward G. Hargis was introduced as the new chief of the Frederick Police Department at a news conference Thursday morning at City Hall. 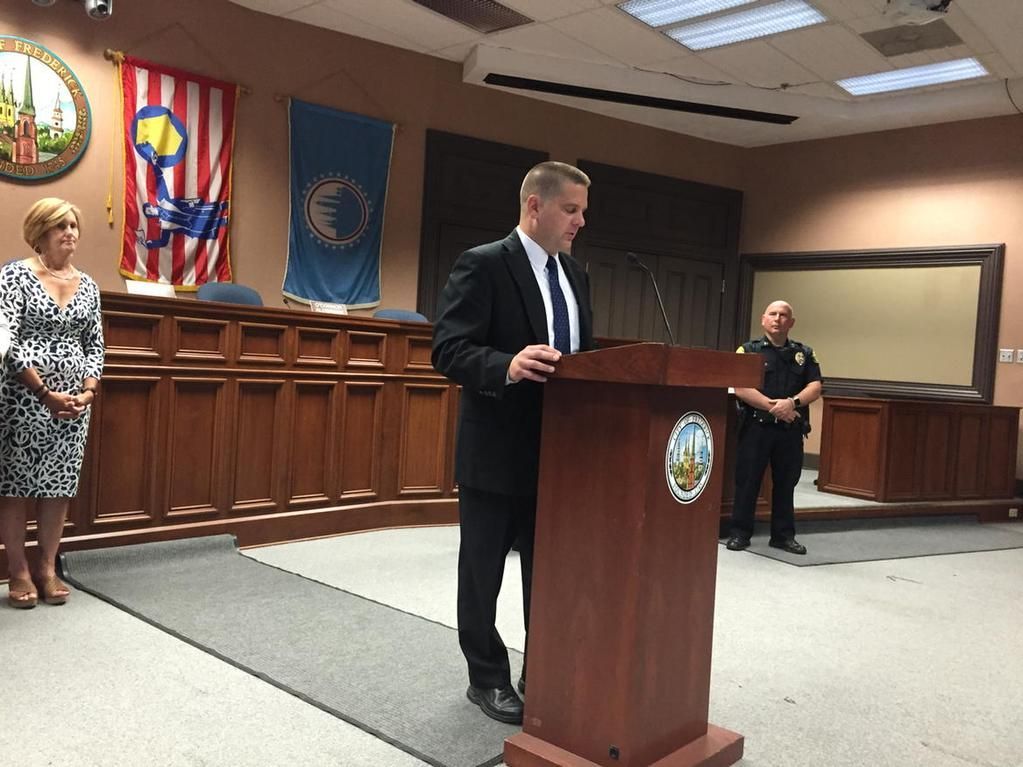 Edward G. Hargis was introduced as the new chief of the Frederick Police Department at a news conference Thursday morning at City Hall.

“Crime reduction and community partnerships will be my main focus most likely. We can’t do it alone, so we’ve got to have relationships with our community,” Hargis said after Mayor Randy McClement announced his hiring at a news conference Thursday morning at City Hall.

“I’m the new guy coming into town, so I’ve got to build the trust with the community,” Hargis said.

Hargis, 51, most recently served for 61/2 years as chief of the Portsmouth Police Department in Virginia, which reported a 14 percent reduction in overall crime and a 24 percent drop in violent crimes under his leadership, the new chief told Frederick police and city officials Thursday. Hargis also spent 23 years working his way up the ranks of the Camden Police Department in New Jersey, retiring as chief in January 2009.

“Knowing that he’s been in two other departments in two different states, you gain experiences,” McClement said. “Each state, each city, each county is different, and having that experience from other places, I’m sure he’s got some things that maybe Frederick hasn’t thought about.”

In an email response to The Frederick News-Post’s questions Thursday, Portsmouth Vice Mayor Elizabeth M. Psimas said Hargis left the city on extremely good terms when he retired in June.

“Ed Hargis left the Portsmouth Police Department in a much better place than when he came,” Psimas wrote. “Our crime stats have improved. He was stern but fair. He didn’t play politics and worked well with our elected Sheriff. He was above reproach in his personal behavior and I was very sorry to see him go.”

McClement initially hoped to have a successor named within six months of hiring the International Association of Chiefs of Police to handle the city’s search for candidates, which began around Dec. 18, 2014.

The Frederick Police Department, with an authorized force of about 144 sworn officers, is smaller than Hargis’ last department in Portsmouth, which lists an authorized strength of 263 officers, according to the city’s website.

The mayor faced criticism from some people close to the process, including members of the city’s Board of Aldermen and the department’s Fraternal Order of Police, for not making the selection process more open to the public. McClement held no public meetings leading up to Thursday’s announcement and repeatedly declined to discuss details.

“I’m not thrilled with the way that the decision came to us, but my job as an alderman is advice and consent,” Alderwoman Donna Kuzemchak said after Thursday’s announcement.

“We certainly had the ability to give advice, and when someone was brought forward, the question was, ‘Did we believe that person could run the police department and do it well?’ ... And I think Chief Hargis does that.”

Aldermen Kelly Russell and Michael O’Connor expressed satisfaction with Hargis after Thursday’s announcement. Russell, herself a former city police officer, said she had plenty of time to research Hargis and was pleased with what she found.

“I have every confidence in him,” Russell said. “I would encourage the public to get to know him and embrace and welcome him to the community.”

O’Connor said he was also pleased to see a permanent chief onboard. In addition, he praised Grossman’s efforts in keeping the department in top form during the selection process.

“We have a very strong department, and I think [Hargis] knows his job is to keep it that way,” O’Connor said. “And that’s a testament to acting Chief Grossman and the rest of the department.”

Grossman said he saw “nothing but positives” coming from Thursday’s announcement. Grossman was among four high-ranking Frederick Police Department officials confirmed previously by The News-Post as applicants for the permanent chief’s position.

Hargis said he is committed to scheduling individual meetings with the mayor and aldermen to get a feel for Frederick’s political climate. He said he is eager to kick off a strong, hands-on approach to policing and community outreach, including scheduling public meetings and meeting his staff.

“It’s going to be a six-in-the-morning-till-midnight kind of a schedule for me. ... Part of that learning process is actually coming in and jumping in a car with an officer and riding around,” he said. “It’s not uncommon for me to show up on midnight shift and jump in a car, just ride around and back officers up and just get a really good feel for what’s going on.”

Hargis’ starting salary was set at $141,000, McClement said. Hargis said he hopes to step in and take command of the department between July 27 and Aug. 3 as he completes a move from Virginia.

Edward G. Hargis, 51, began his law enforcement career as a dispatcher for the Cherry Hill Police Department in New Jersey in 1982. In 1986, he joined the Camden Police Department as an entry-level police officer.

After serving as deputy chief, Hargis was appointed chief of Camden police before his retirement to join the Portsmouth Police Department as chief in January 2009.

A graduate of the 207th session of the FBI National Academy, Hargis also served as an adjunct professor in administration of justice at the Tidewater Community College during his time in Portsmouth.

Hargis' wife, Barb Hargis, currently works in New Jersey but is preparing to move to Frederick. He has two children, a 22-year-old son who lives in Maryland and a 28-year-old daughter who resides in North Carolina.

This guy looks like a good pick. Only time will tell if he fits in here, but we should all wish him the best. The reason that the Mayor has not released information about the other applicants is very likely because you get a much better pool when the names are not divulged. Imagine what a mess would result if the names of the 80 applicants were released, and the newspaper in each of their hometowns wrote stories about their apparent desire to jump ship and find greener pastures. When things are done that way, often the best candidates don't apply, because they don't want to deal with backlash. If you've ever looked for another job when you already had one, you probably understand what I mean. It gets kind of touchy!

I am really impressed by Hargis' past performance, at Portsmouth. I would like to hear how he accomplished that task.

"The Camden police chief has resigned after less than seven months on the job, officials said, leaving control of the department an open question as police grapple with the sixth leadership change in as many years.

Chief Edward Hargis, 44, who was given credit yesterday for stabilizing a department with low morale and a complicated bureaucratic structure, told officials he was retiring to pursue a job in the private sector."

Camden, NJ is rough territory. In comparison, Frederick should be a cakewalk for him.

Part of that learning process is actually coming in and jumping in a car with an officer and riding around," he said. "It's not uncommon for me to show up on midnight shift and jump in a car, just ride around and back officers up and just get a really good feel for what's going on."

How about doing more walking around? -----------
particularly the west end, downtown and elsewhere...
and talking to the people.

Won't know if there was a panel unless it gets asked. You may be right that the Mayor made selection on his own. Should have no problem releasing the panel info now that the selection process is complete. FNP should FOIA the information on the process now. Be interesting to see what the City releases.

If the new police chief is retired already, and add his salary as the new Frederick police chief, he should be making plenty of money???? The public did not any details in making the selection???????

"Hargis announced Friday that he intends to retire June 1. He joined the department as chief in January 2009, coming from Camden, N.J."
...
"In an email to the department, Hargis said he wanted to spend more time with his family. On Friday, he confirmed his intention to retire in an email but did not return a phone message seeking further comment."
...
"In his email to the staff, Hargis said his department had reduced the city's overall crime rate by 14 percent, violent crime by 24 percent and property crime by 13 percent. 'That is quite an accomplishment,' Hargis wrote, and he credited officers' tenacity and willingness to use new crime-fighting techniques.

Wow what a breaking non-story. All this reporter did was re-hash some old news after giving the name of the new chief. A high school newspaper reporter would at least do a internet search to give some back ground on Mr. Hargis, which is exactly what I did. Oh well, what can one expect from the amateur reporters at the Frederick Compost!

Lets ask who was on the board now that intrviewed the candidates. City should release that now since Chief has been selected.

Aug. 1 start date is what mayor said that means 10 1/2 months after Chief Ledwell left. Too Long!!!

Hope this selections works out well because if not then mayor will have alot of questions to answer.

What leads you to believe a 'board' or anyone else for that matter was involved other than the Mayor in the decision?