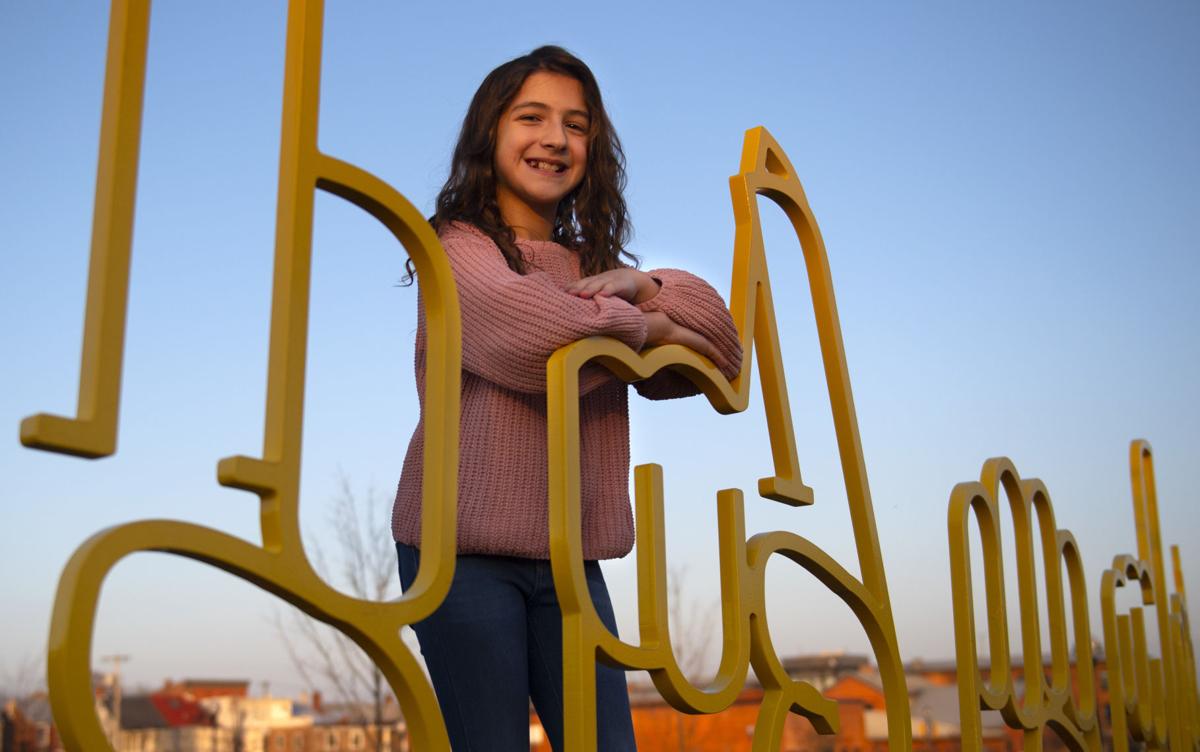 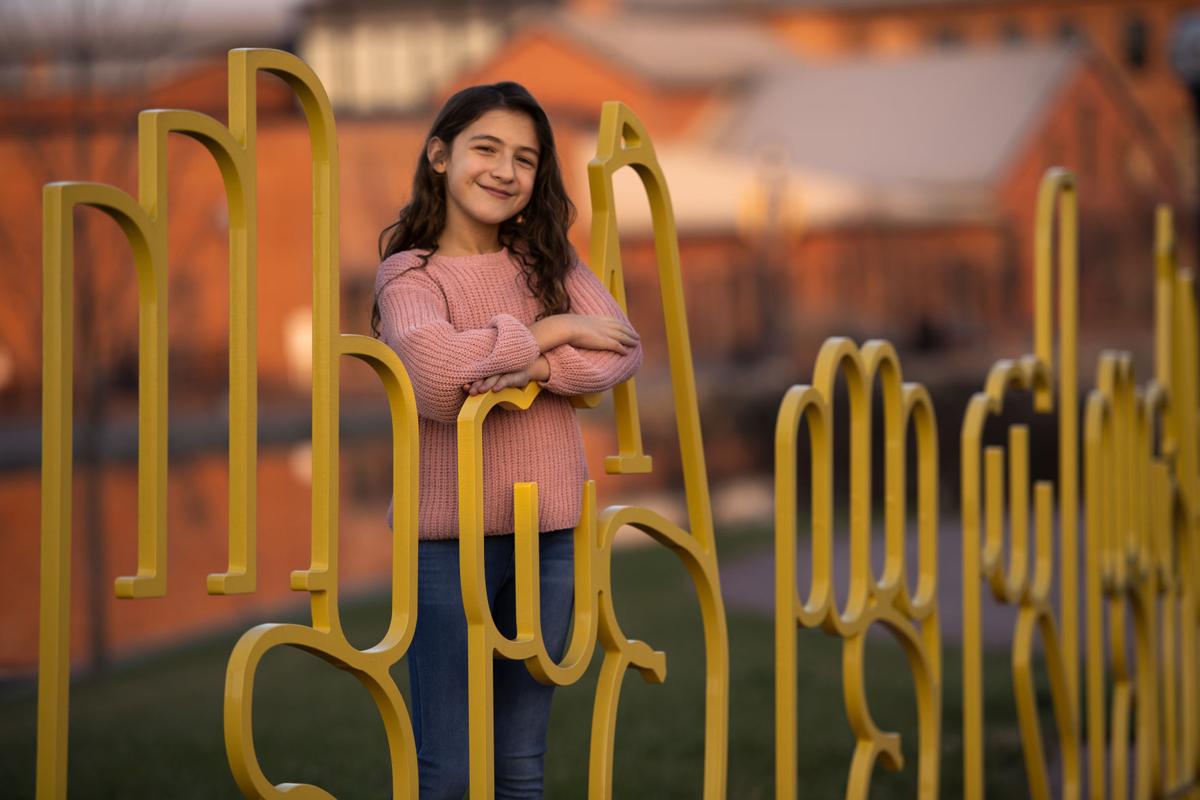 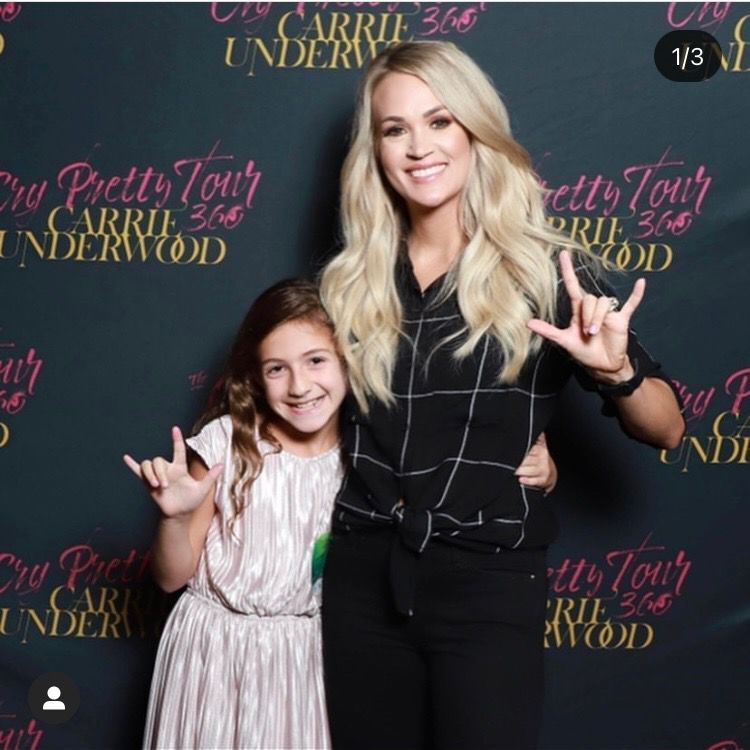 Frederick resident Savannah Dahan, now 10, poses with country singer Carrie Underwood in October 2019 at Capital One Arena in D.C. Dahan was invited to attend one of the singer's concerts and meet with her backstage, where she taught her sign language and signed with her. 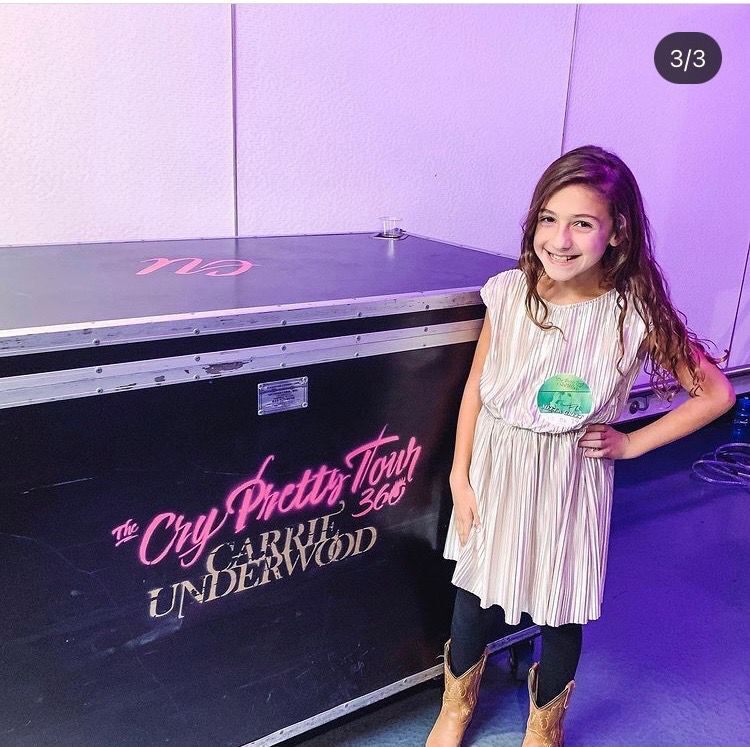 Frederick resident Savannah Dahan, now 10, poses with country singer Carrie Underwood in October 2019 at Capital One Arena in D.C. Dahan was invited to attend one of the singer's concerts and meet with her backstage, where she taught her sign language and signed with her.

The song exploded in sound around her while the lyrics were projected on a screen. The audience cheered her on, and her face and body swayed and pulsed as she expressed the emotion of the song.

Savannah wasn’t singing though. Instead, she was performing the song through her own language — American Sign Language (ASL).

Savannah was born Deaf, but that has not stopped the 10-year-old from enjoying music. And her love for it has launched her to stardom over the past year.

Born and raised in Frederick, along with two sisters and parents who are also Deaf, Savannah has always loved performing. She is a student at Maryland School for the Deaf and has been involved in many school theater productions.

But it was a simple home video that launched her new-found fame. Savannah’s father, Richard Dahan, filmed her one day as she used sign language to “sing” along to country music singer Carrie Underwood’s song “The Champion”.

“At the time we were like, she’s 8 years old but we decided to go ahead, and wow, it became viral,” said Savannah’s mom, Jennifer Dahan. “I remember, as the views were racking up, we were like, oh my goodness, this is really taking off ... just to watch that, it was incredible.”

Savannah and her parents spoke through an ASL interpreter.

The video was eventually uploaded to Youtube and has since been watched over 100,000 times.

Since that first video went viral in 2019, Savannah has signed ASL alongside Underwood, gained almost 20,000 Instagram followers, and appeared in a Hallmark Christmas commercial.

“Really, the word is wow,” Savannah said when describing the past year.

Savannah’s dad said he thinks people are impressed at what she’s able to do at such a young age.

“Her ability to go from the English to ASL, it’s not easy, and there is a lot of emotion that she has that goes in alignment with the music videos themselves,” he said. “Her ability to be able to express the same intensity of the music and the meaning behind the music ... to understand that and to communicate that in ASL ... I think people were really fascinated.”

Soon after the home video, Savannah was contacted by Underwood and invited to attend one of the singer’s concerts and meet with her backstage. Savannah taught Underwood some basic ASL and then signed along as Underwood sang “The Champion” again, this time with Savannah right beside her.

The video was shared by Underwood on her own Instagram page along with the caption, “Savannah! You bring so much joy to #TheChampion! Thank you for such a special moment.”

Savannah said performing alongside Underwood is one of her best memories and what led to her other opportunities with “Little Big Shots” and Hallmark.

Savannah is now well-known across social media and within the Deaf community as “SavvyASL”.

Savvy is her nickname, and ASL is her whole purpose.

These days, she uses her platform to bring awareness to issues important to her — such as marine life conservation — and to advocate for greater accessibility.

Specifically, Savannah would like to see more music videos produced with captioning and for there to be ASL interpreters available at concerts.

Until that is achieved on a mass scale though, Savannah said she will continue to be the connection for the Deaf community.

“Whenever people are seeing me signing, I am in some ways the captioning. They can access it and understand it through me, and there’s a connection there,” she said.

When asked how she is able to sign along to the songs while being Deaf, Savannah explained that she uses a hearing aid to softly pick up the sound. That, combined with reading the lyrics, helps her understand the song and express the message of it.

“With Deaf people, there’s a range and different levels of being Deaf ... some people, there are certain sounds that they’re able to recognize specifically with hearing aids ... so my hearing aids do help a lot in that situation,” she said. “They don’t help 100 percent, but with practice, I’m able to identify sounds.”

Her musical signing has also led to other creative opportunities.

She recently appeared in a Hallmark Christmas commercial that was ASL friendly with captioning and each character using ASL.

Savannah said it was an honor to be included in such inclusive content and hopes she can continue to showcase ASL in such a positive light.

“I just want to make sure that people know ASL is a beautiful language and that they can relate to it and the important message of representation of different people. Even if people can’t hear, they can do so many things, the only thing they can’t do is hear, that’s it,” she said.

Savannah’s father agreed, saying he hopes both Savannah and others who are helping bring ASL to the forefront can show that Deafness is more than a medical trait.

“Instead of people viewing Deafness as a medical problem, they’re able to see the beauty of our language, our own language, our culture and the so many things that Deaf people have, not just the language but also the expressiveness,” he said.

Going forward, Savannah said she hopes to continue to promote ASL and keep performing. Her parents said they will continue to support her as long as she enjoys it.

It’s rare that a 10-year-old has 20,000 Instagram followers, but for Savannah, life still feels the same, just with a few really cool blips along the way.

“Some people started asking for my autograph, wanted pictures with me, and I realized, wow, I really did impact so many people,” she said. “And I really do enjoy it, but of course, I’m still a normal person.”

What a delightful story in the Frederick News-Post on Dec. 17 about 10-year-old Savannah Dahan (A 'Savvy' star: From 'Little Big Shots' to a n…