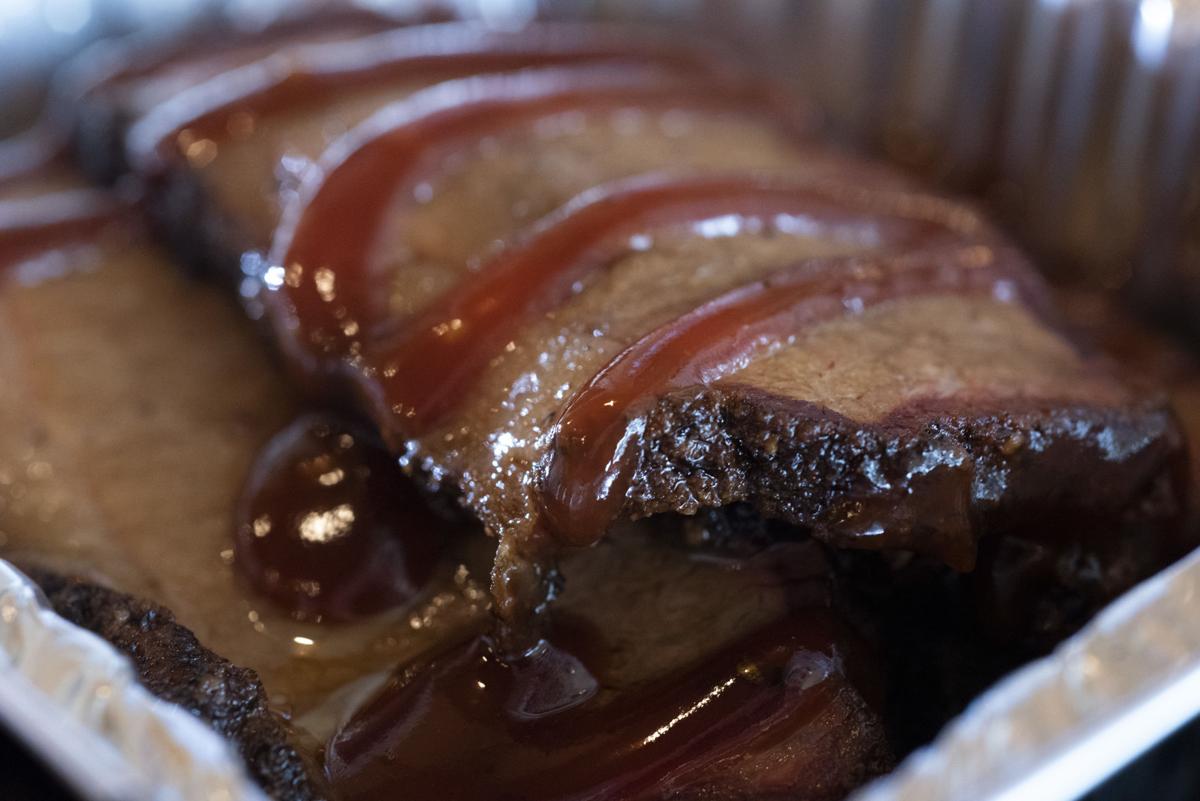 ABOVE LEFT: The beef brisket at Mackie’s Southern Barbeque on West 7th Street in Frederick. ABOVE RIGHT: The Amarillo fries at Mackie’s, which feature a pound of fries topped with cheese, bacon, jalapeños and barbeque sauce. BELOW: A rack of ribs at Mackie’s.

The beef brisket at Mackie’s Southern Barbeque on West 7th Street in Frederick. 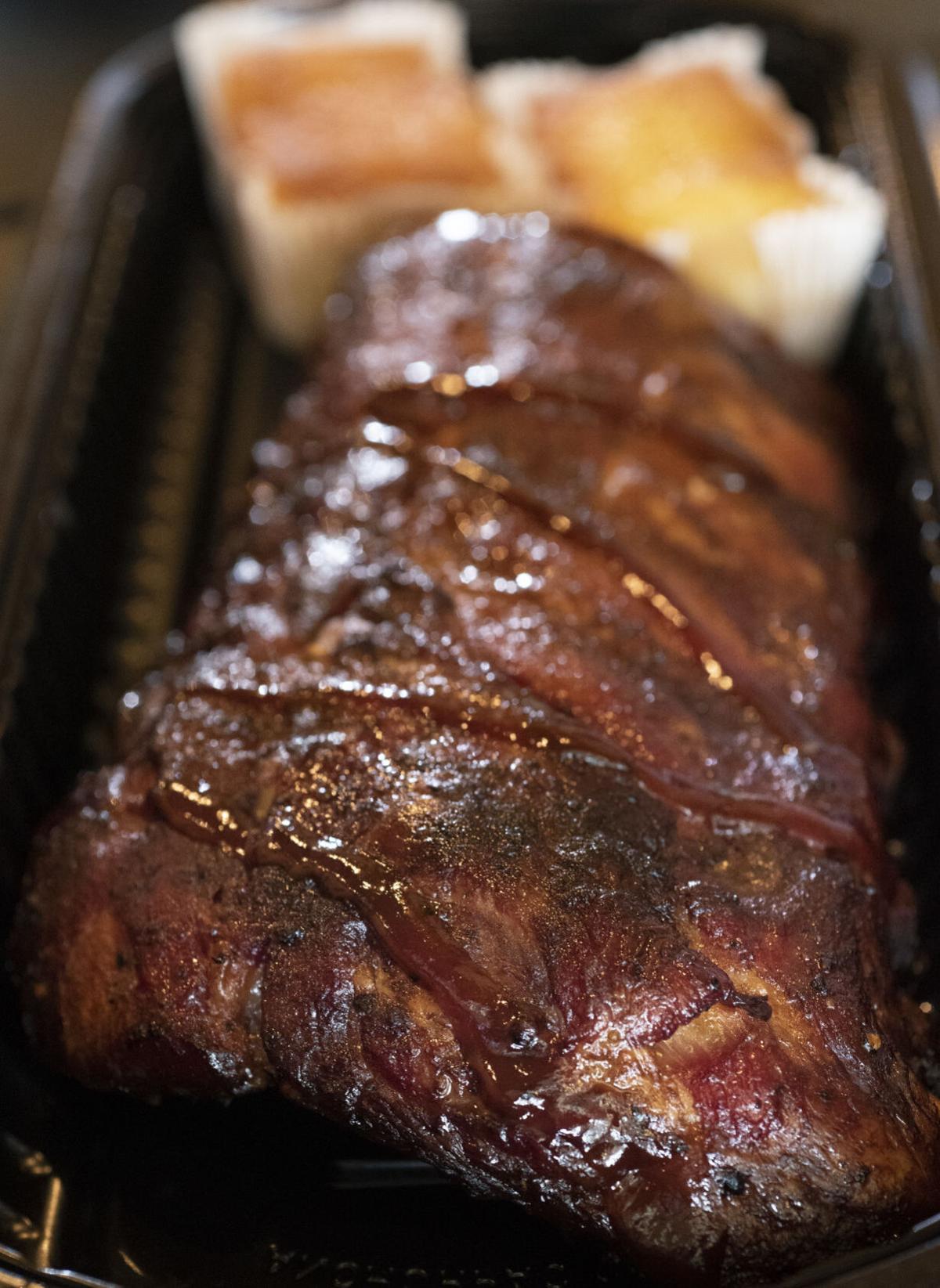 A rack of ribs at Mackie’s Southern Barbecue in Frederick. 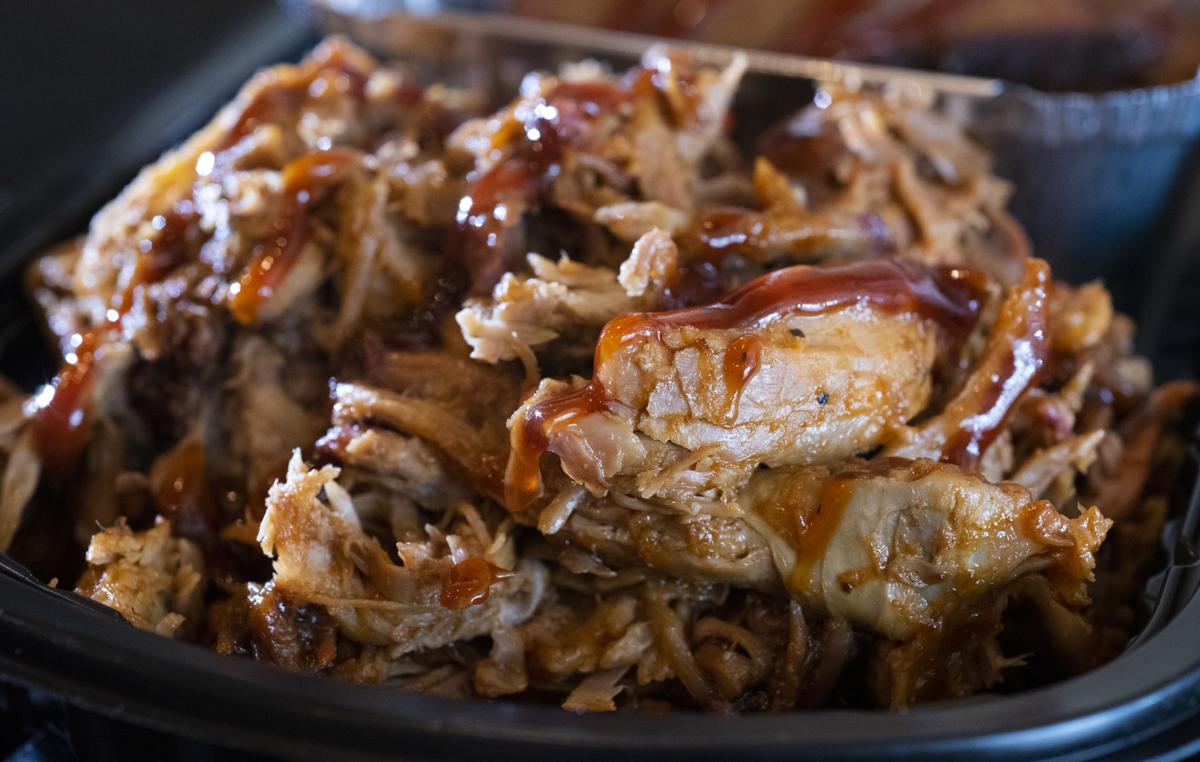 TOP LEFT: The pulled pork at Mackie’s Southern Barbecue on West 7th Street in Frederick. TOP RIGHT: The Amarillo Fries at Mackie’s, which feature a pound of fries topped with cheese, bacon, jalapeños and barbeque sauce. BOTTOM LEFT: The beef brisket at Mackie’s. 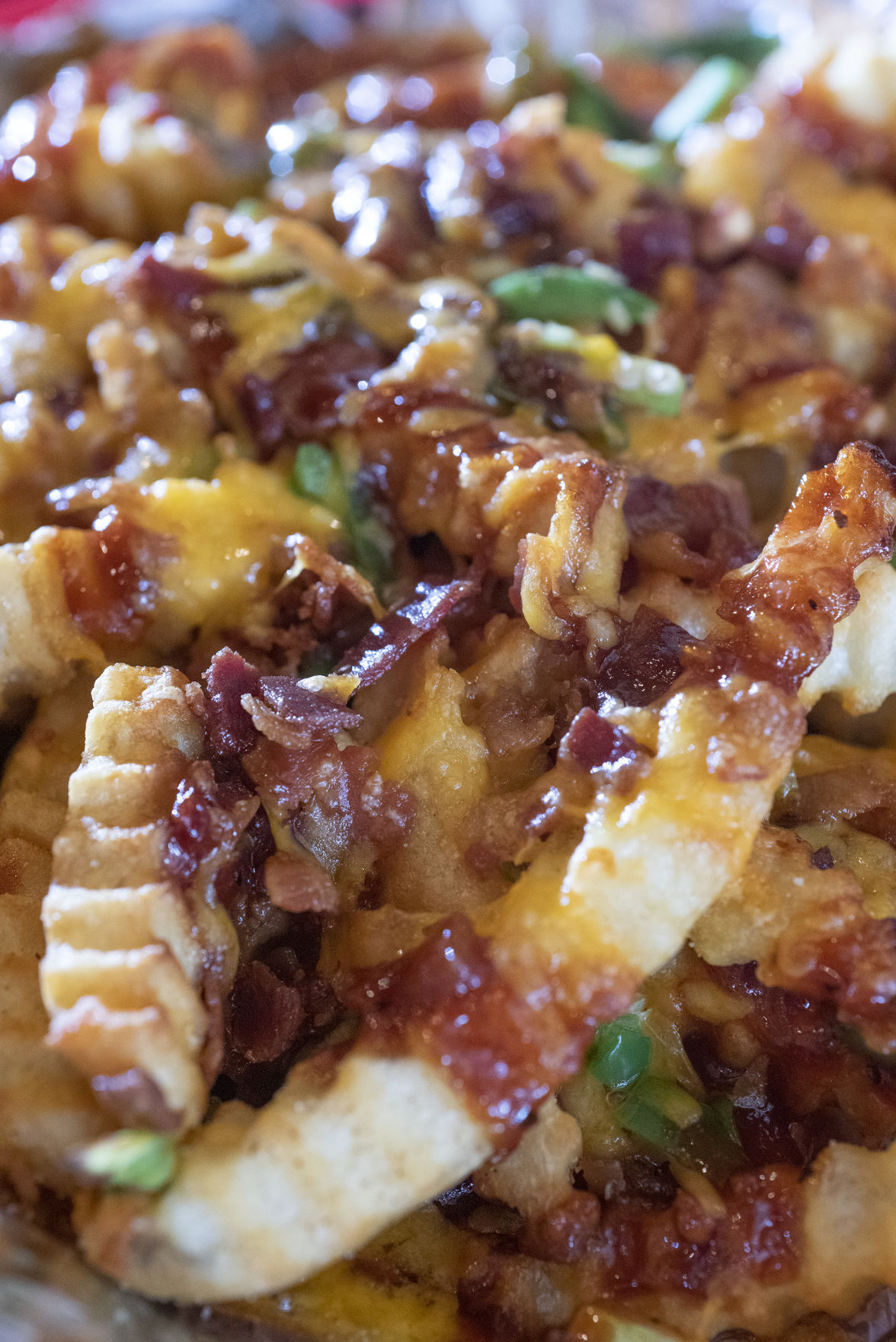 The Amarillo fries at Mackie’s, which feature a pound of fries topped with cheese, bacon, jalapeños and barbecue sauce

ABOVE LEFT: The beef brisket at Mackie’s Southern Barbeque on West 7th Street in Frederick. ABOVE RIGHT: The Amarillo fries at Mackie’s, which feature a pound of fries topped with cheese, bacon, jalapeños and barbeque sauce. BELOW: A rack of ribs at Mackie’s.

The beef brisket at Mackie’s Southern Barbeque on West 7th Street in Frederick.

A rack of ribs at Mackie’s Southern Barbecue in Frederick.

TOP LEFT: The pulled pork at Mackie’s Southern Barbecue on West 7th Street in Frederick. TOP RIGHT: The Amarillo Fries at Mackie’s, which feature a pound of fries topped with cheese, bacon, jalapeños and barbeque sauce. BOTTOM LEFT: The beef brisket at Mackie’s.

The Amarillo fries at Mackie’s, which feature a pound of fries topped with cheese, bacon, jalapeños and barbecue sauce

I’ve often wondered to myself what can be classified as true American food. Is it burgers and fries? Is it hotdogs at a ball game? Is it the very notion of fast food itself?

What, as a nation, do we hold up as our national cuisine? In a country that has taken in and benefitted from the foods and peoples of other lands, what is one thing we can truly call our own? As a food critic, these are the conversations I have with myself.

I’ve finally come to settle on what I think is the right answer. It’s barbecue. Southern-style barbecue, to be specific. Traditions, methods and flavors that come out of places like Memphis, Kansas City and North Carolina.

Now, the term barbecue traditionally refers to a specific way that meat is cooked, which most often means smoking it outdoors over charcoal or wood. Unfortunately, the United States can’t claim this cooking method as its own. Numerous countries — like Australia, South Korea, and South Africa — cook meat the same way. In fact, while visiting South Africa and Botswana in 2015, I enjoyed many South African “braai” as they call it, and I can tell you it tastes quite different than what Americans think of as barbecue.

So, the cooking method we can’t claim, but the flavors, the specific dishes, and the nostalgia and sense of patriotism that comes along with it, I think, is all ours.

People will often say it’s impossible to get good Southern-style barbecue the further north you go. But I think Maryland, and specifically Frederick, may be the last spot where good meat and sauce can be found.

Enter Mackie’s Southern Barbecue. There are two locations in Maryland — in Frederick and in Gaithersburg. The company also owns a few food trucks and other establishments across the DMV that go by different names.

But we’re going to focus on their prime venture. Mackie’s in Frederick is literally on the first floor of a row-house off West 7th Street. It’s very easy to miss, the sign can hardly be seen from the street but it’s there and it’s serving up some delicious eats.

Walking up to the restaurant makes you feel like you’re in some small, small town about to get food from a well-known neighbor. The inside still feels very much like a house just with a more tables and a counter. But it’s homey and warm.

According to their website, Mackie’s is only offering take out at this time but they do have two tables set up on their front porch, which I’m sure diners would be able to take advantage of.

The menu is simple but offers a lot of different combinations which allow you the chance to taste everything you want in one meal.

Mackie’s offers all the basic barbecue meats — pulled pork, brisket, ribs and pulled chicken. They are all offered in platter form or by the pound (or slab), or can be asked for on a sandwich.

I was lucky enough to try them all and my favorite, by a landslide, was the brisket. Whenever I eat barbecue, I usually order ribs or pulled pork, so the fact that I’m saying the brisket was my favorite is a pretty big deal.

I have never been a brisket person. My biggest complaint about brisket in the past was that it was too dry. I hate dry meat, and smoked or barbecued brisket tends to be overdone. But not Mackie’s.

The meat was still quite tender and there was a beautiful layer of fat on the outside of each piece that made it melt in your mouth. The flavor was exceptional. A little salty, a little savory and very smoky. I have no other way to describe it other than you could literally taste the smoke — but not the kind of smoke that makes you cough, the kind of smoke that gives of hints of cinnamon and fruit, and makes you want to put on some flannel and traverse through fallen leaves.

All in all, the brisket is a must-try, people.

The pulled pork was also delicious. Again, not too dry, and it came already tossed in a minimal amount of Mackie’s barbecue sauce, which is some of the best I’ve ever had.

If you are able to get a bottle of it, do it. It’s perfectly sweet and tangy with bits of minced garlic and flavors of Worcestershire sauce, paprika and just a little bit of ketchup. You will want to eat spoonfuls of this.

Now, I will say that the ribs were not my favorite. Although the meat was perfectly cooked I felt the dry rub could have either used a little more spice or could have been rubbed on a bit more. The meat itself was a bit on the bland side, and although it can be salvaged by a slathering of the barbecue sauce it would have been nice to receive a little bit more from what Mackie’s calls their “special rub.”

But Mackie’s shines in their sides. Everything from coleslaw to green beans is offered. Their macaroni and cheese is a solid choice. It’s perfectly in between cheesy and creamy and has a lovely taste of freshly cracked black pepper.

I also enjoyed the potato salad, which is perfectly sour and tangy. I specifically liked that the salad has chopped pickle in it and that the potato pieces were quite large.

The quesadilla was also a welcome surprise. You get your choice of chicken or pork and the meat and melted cheese come together with a bit of that awesome barbecue sauce to make a delicious take on a Mexican classic.

Overall, very good things going on at Mackie’s. I’ve never gushed about barbecue this much before. Now, I’m sure there is better barbecue to have in those places I mentioned before, but for Maryland, Mackie’s is serving up some pretty good options.

So until we are able to travel again and get that really good smoked southern meat, try Mackie’s, and while you’re eating, revel in the amazingness that is true American, southern barbecue.

Frederick has fair to good bbq. The furthest north to have great bbq is Fredericksburg VA.

The link is inccorrect. It should end with .net http://www.mackiessouthernbarbecue.net/