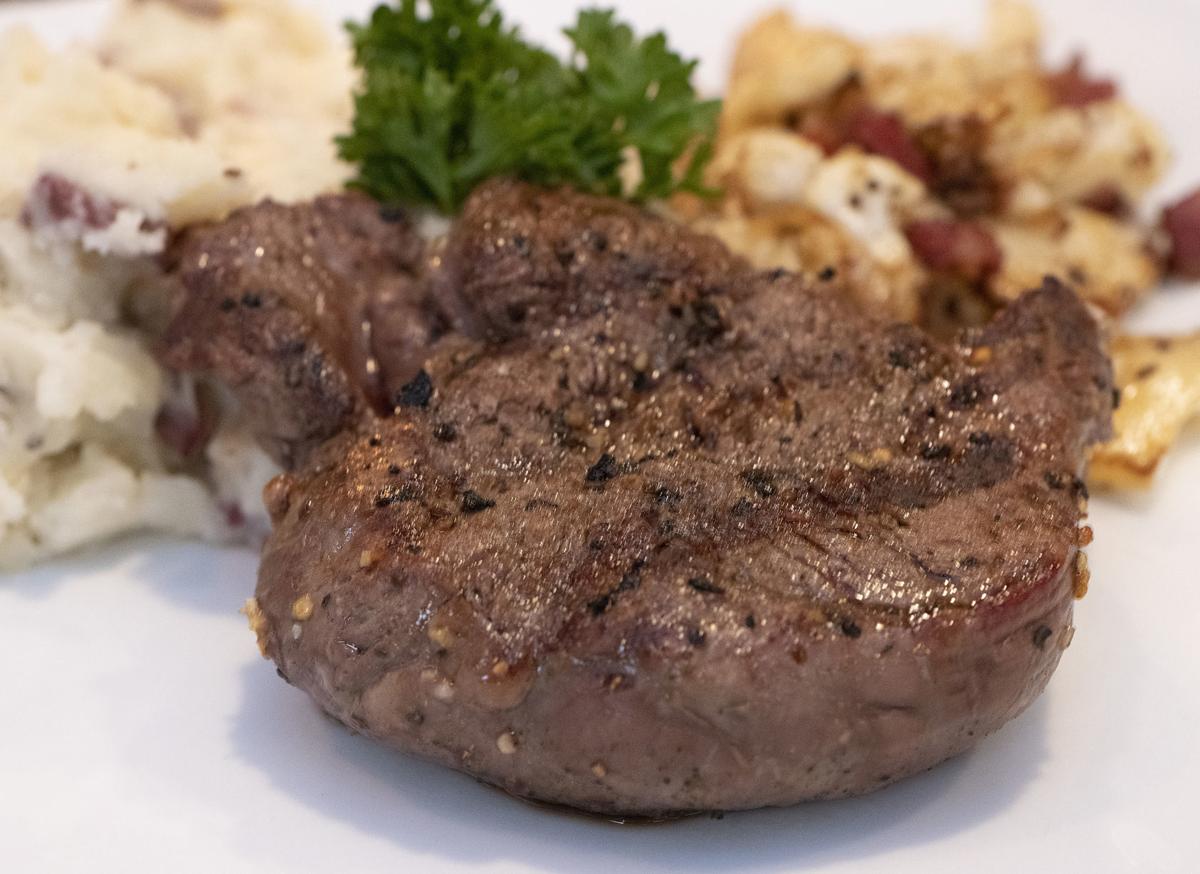 sy Fosters on the Point 1 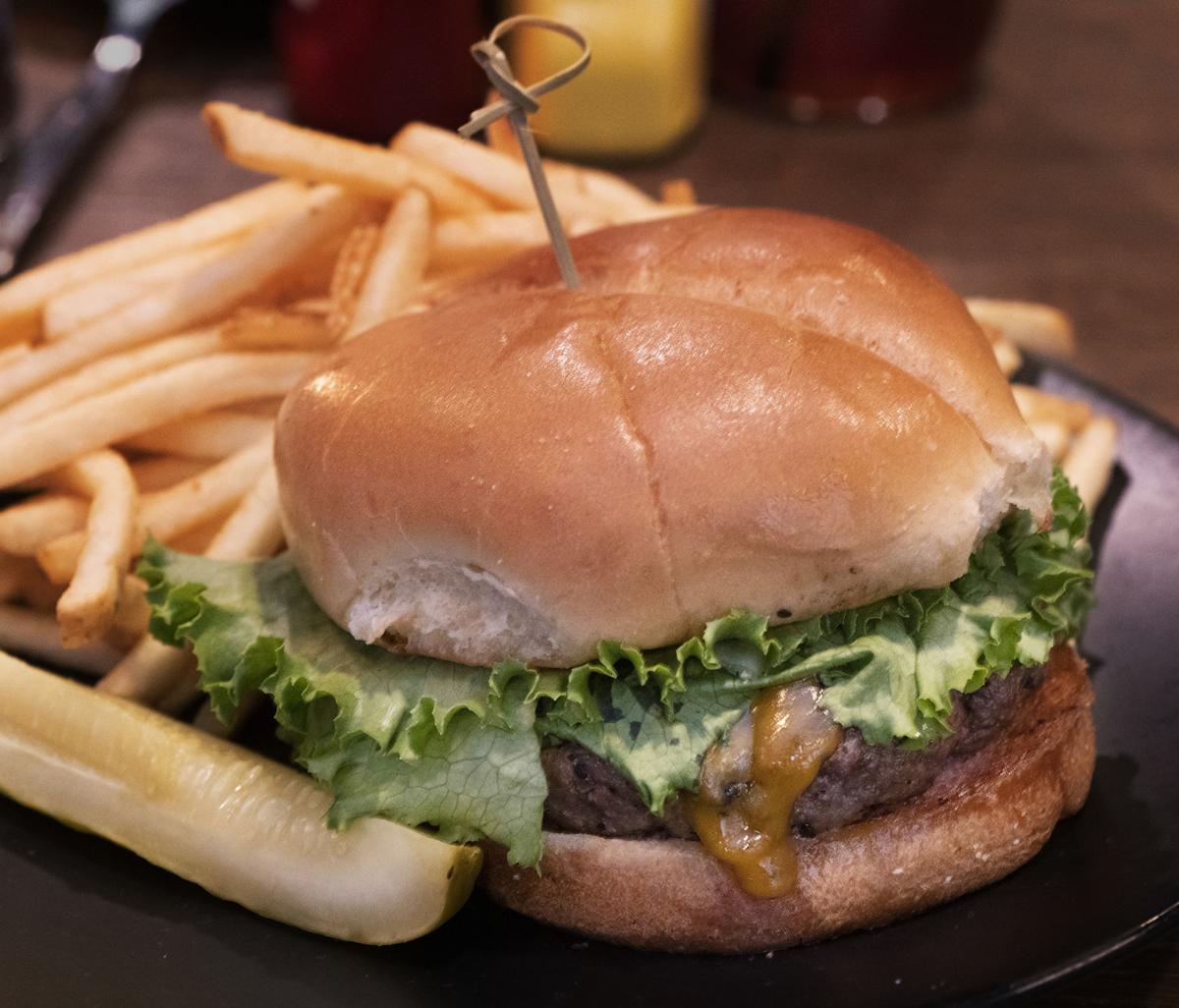 The mushroom and Swiss burger topped with two slices of Swiss cheese and sauteed mushrooms at Foster’s on the Point in Hagerstown. 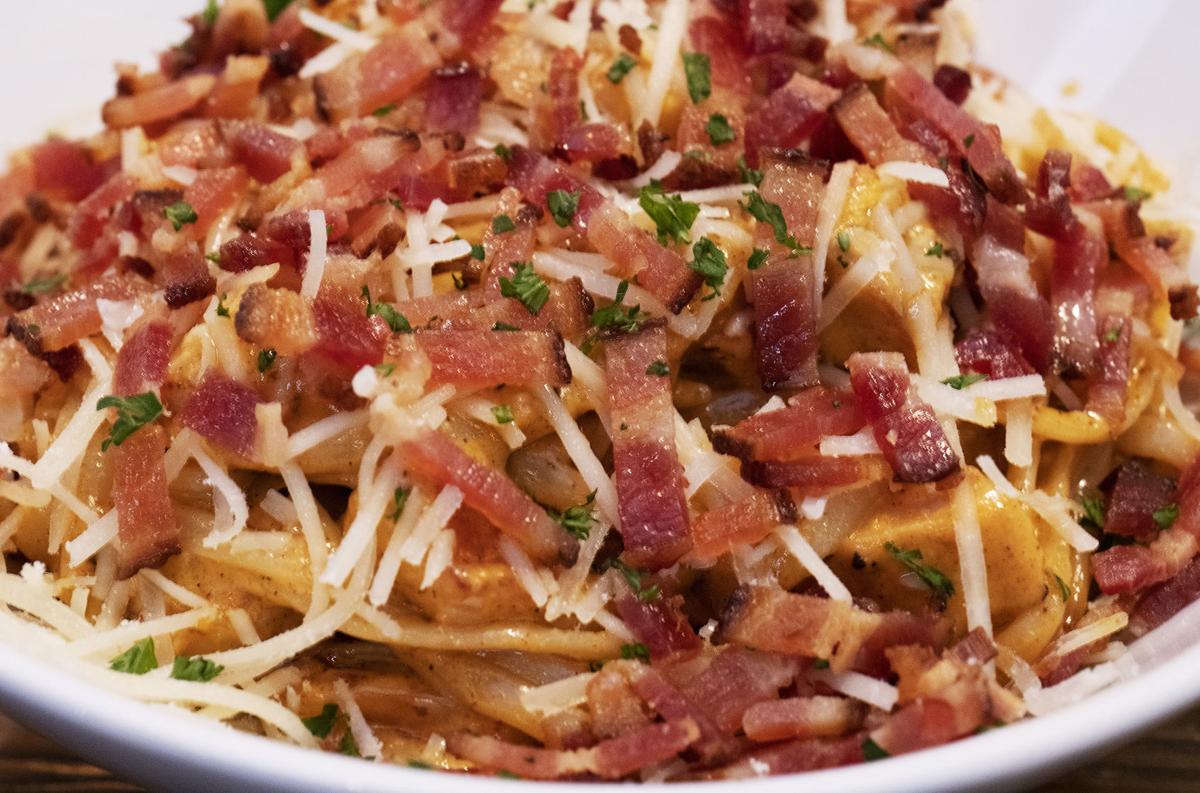 One of the most popular items on the menu at Foster’s on the Point in Hagerstown is the Linguine Miranda that features blackened chicken and shrimp tossed in a spicy parmesan cream sauce and topped with bacon and parmesan cheese. 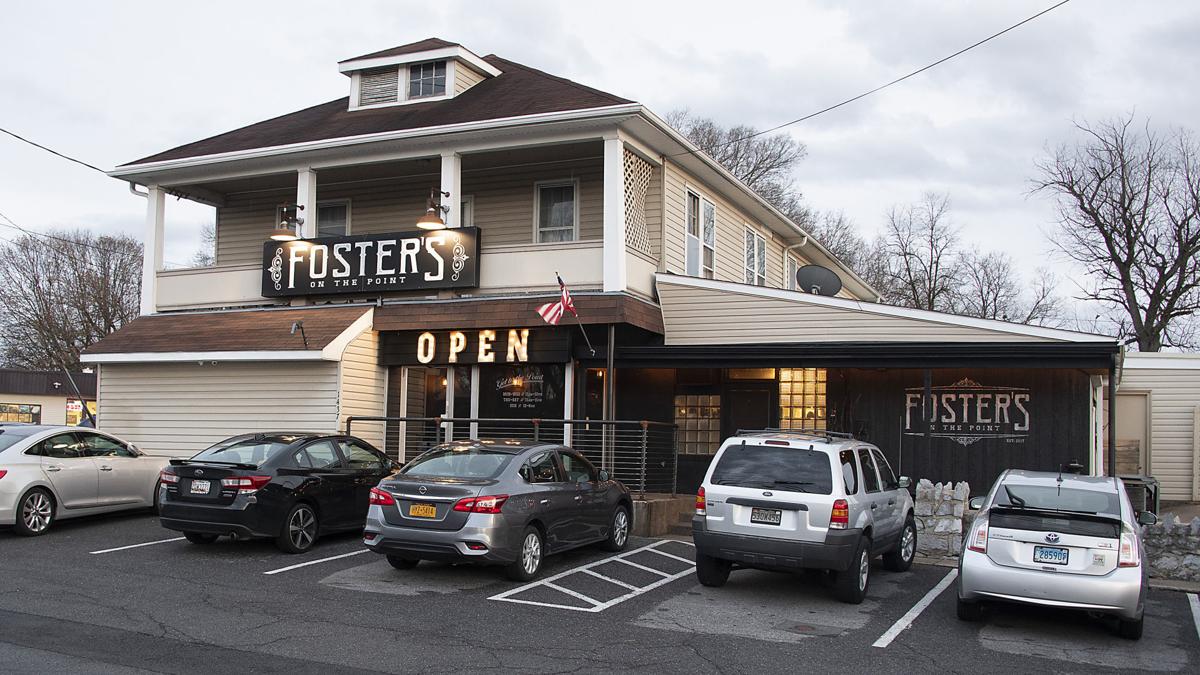 Foster’s on the Point at 1437 Salem Avenue in Hagerstown. 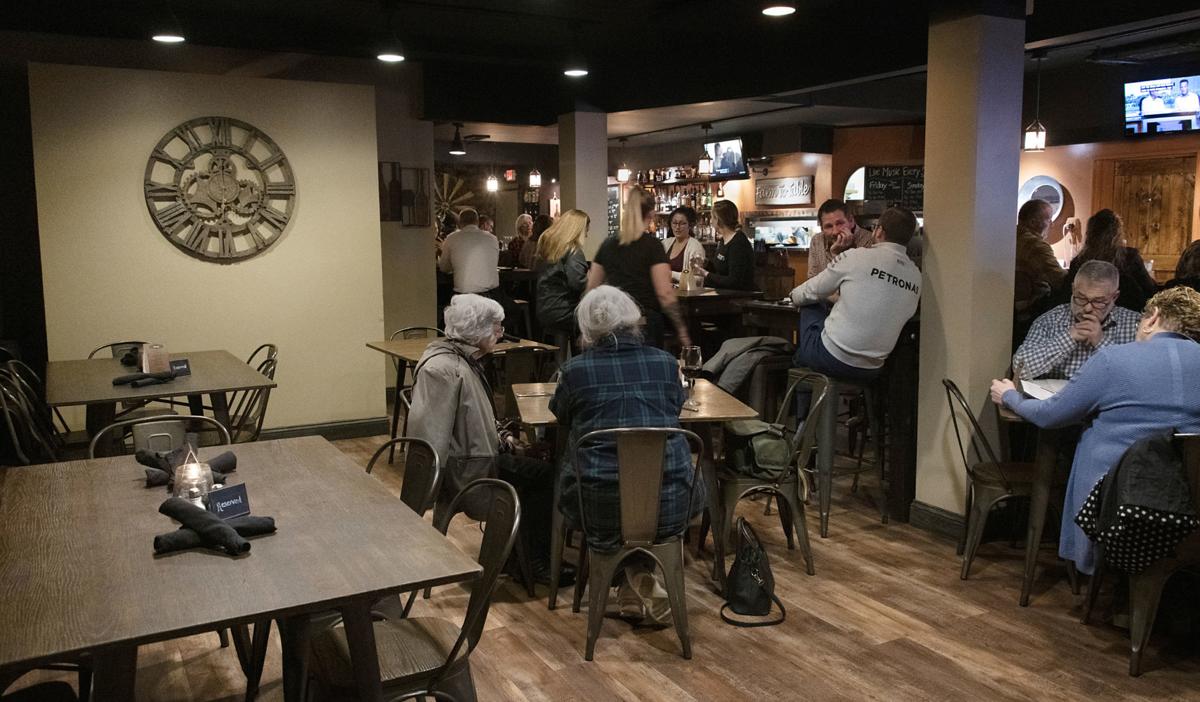 This is the dining area and bar at Foster’s on the Point in Hagerstown.

sy Fosters on the Point 1

The mushroom and Swiss burger topped with two slices of Swiss cheese and sauteed mushrooms at Foster’s on the Point in Hagerstown.

One of the most popular items on the menu at Foster’s on the Point in Hagerstown is the Linguine Miranda that features blackened chicken and shrimp tossed in a spicy parmesan cream sauce and topped with bacon and parmesan cheese.

Foster’s on the Point at 1437 Salem Avenue in Hagerstown.

This is the dining area and bar at Foster’s on the Point in Hagerstown.

With the holiday season upon us, the act of shopping is in full swing. Buying gifts for family, friends, neighbors, co-workers, mail carriers, the list seems to never end.

Maybe you’re doing all your shopping online, or maybe you’re one of those people who still likes to travel to brick and motor stores to physically pick up your gifted items. Maybe you’ll even go so far as to travel to one of the premium outlets in the area, like the one in Hagerstown.

This is all a long-winded way of saying that if you decide you want to do a little holiday shopping in Hagerstown and know you will be hungry after walking around for hours carrying large bags, I have a spot for you.

When you’re done shopping — or maybe even halfway done but get hungry for lunch — get in your car, get back on the highway and drive ten minutes to Foster’s on the Point restaurant on the outskirts of the city. You’ll be greeted with a dark and cozy interior made up of wood paneling and industrial-style décor that is sure to warm up your spirits on any cold day.

Although a bit of a smaller space, I found the restaurant to be laid out and the space used quite nicely, the biggest plus being the long length of the bar and the number of seats it offers.

There are several spirit options including a list of beers on tap, which changes every few days. Foster’s also offers a small but eclectic list of winter cocktails like a pumpkin white Russian.

During a lunch visit, my guest and I shared an appetizer of beer-battered asparagus to start. Although perfectly crisp and served with a nice tangy, Cajun hollandaise, the batter and asparagus itself were quite bland. No seasoning in the batter, which I expected to have at least a little bit of flavor since it was “beer-battered.”

My entrée however, made up for the tasteless fried asparagus. I tried the “On Point” burger which consisted of a thick and juicy patty cooked just the way I liked it (medium-rare), topped with provolone, sliced avocado, bacon, a fried egg, lettuce, tomatoes and onion. I tend to like burgers that go a little over-the-top with toppings and I am always down for a fried egg on anything.

Although the burger was absolutely huge and I could barely open my mouth wide enough to take a bite as I made my way through it, I found it to be exceptional.

There wasn’t too much avocado, even though the pieces kept slipping per usual, the bacon was crispy, and I appreciated the use of red onion instead of the standard white, which I always feel adds just a little more flavor.

The best part of the burger, though, and what led me to a revelation, was the fried egg. I’ve had many a burger with a fried egg and although, as I said, I love it, it always ends up being a mess because the yolk breaks and gets all over the burger and subsequently your hands.

But Foster’s fried egg was truly fried, meaning no messy yolk. I love a good runny yolk on anything but the ability to eat a messy burger with the flavor of a fried egg sans the added mess of a runny yolk was a phenomenon I didn’t realize I had been missing out on until that moment.

As Dwight Schrute from The Office likes to say – perfectenschlag.

But enough about the burger, right? What if you finish up all your shopping, realize it’s 7 o’clock and the thought of going home and cooking something up is the most dreadful thought you’ve ever had? My answer to you is once again only a ten-minute drive away, Foster’s offers up a select menu of entrees that are only served after 4 p.m.

When a guest and I traveled there for dinner one night, we started with the mussels appetizer, which is your typical bowl of mussels steamed in a white wine broth with garlic and herbs and served with crispy bread.

I found the mussels to be less than average as they had more of a briny, salty taste than a refreshing crispness that should have come from the white wine. The taste of garlic was also nowhere to be found in the dish.

But it seems to be a trend at Foster’s that the main courses always prove to be better than the first.

For dinner I had their butcher’s cut steak – a daily cut of meat priced at market value.

What I was served was a 4-ounce piece of incredibly tender steak, once again cooked and seasoned perfectly just like the burger.

It came with two sides of my choice, and I went with both the vegetable and risotto of the day – sautéed green beans and parmesan risotto. The green beans were pretty standard, but delicious, nonetheless. The risotto was on a whole other level and I found myself enjoying it more than the steak.

Think of perfectly creamy, cheesy macaroni and cheese and then elevate it and put it into risotto form – that’s what this was. Incredibly rich, but not overpowering, and addictingly cheesy, even with stringiness when you pulled your fork away.

I will be thinking about that risotto for a long, long time.

My guest had the Foster’s pasta, which was a penne pasta with chicken, capers, pancetta, and artichoke hearts in a nice cream sauce that had a touch of lemon in it. The sauce wasn’t overly creamy or heavy and the combination of ingredients provided a nice warm bowl of pasta.

And there is much more to explore at Foster’s including large colorful salads, crab cakes, and a variety of sandwiches.

The restaurant is situated a little randomly on the side of the road — which you will notice if you visit — proved to be a modern space with a modern menu, but with vibes of a neighborhood bar. The waitstaff is all incredibly welcoming and friendly, and sitting at the bar makes you feel like a local even if you may just be there for a shopping trip.

So, go shop! Spend your money! And then go spend a little more money on a nice meal from Foster’s, it will be worth it.

Foster's on the Point

37. Learn the history of Frederick County during the Civil War