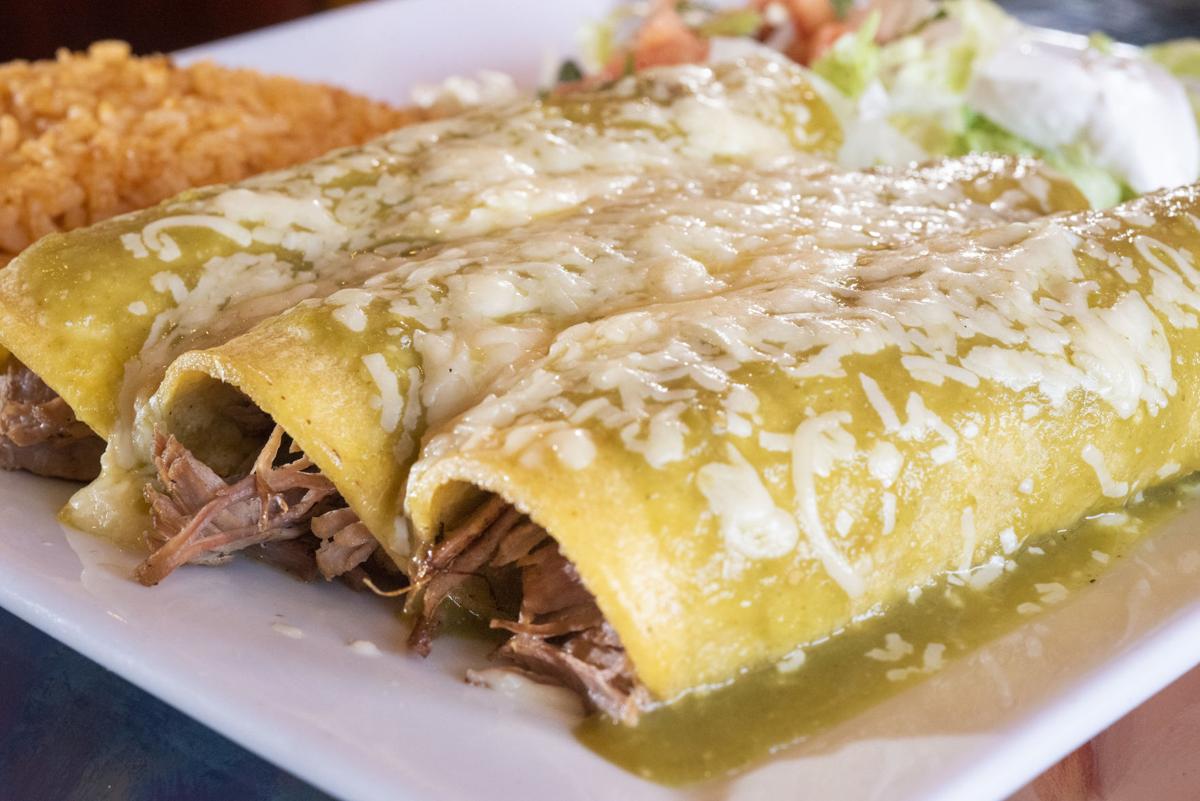 The pork enchiladas at Los Toltecos, located in the Frederick Shopping Center on W. 7th Street. 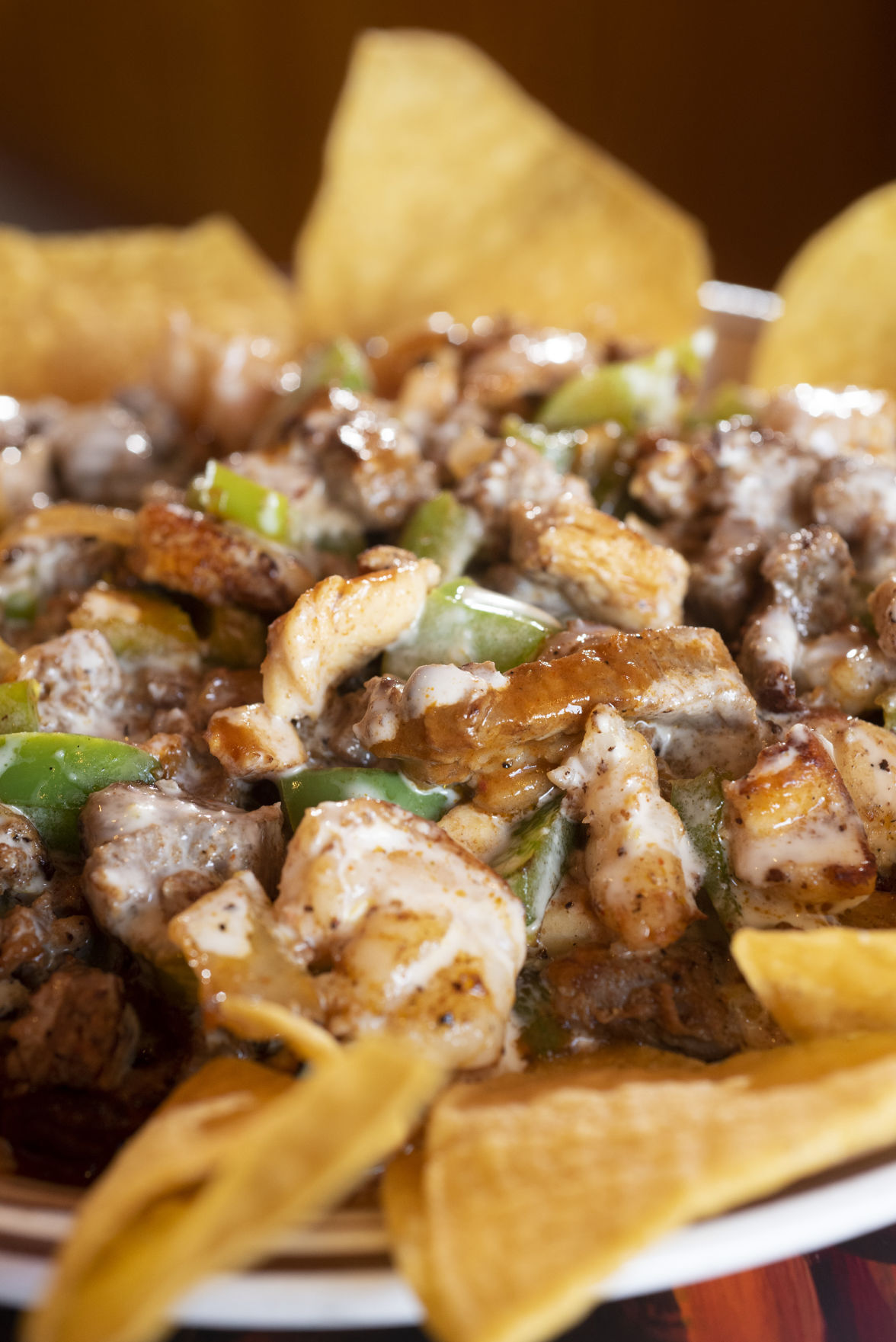 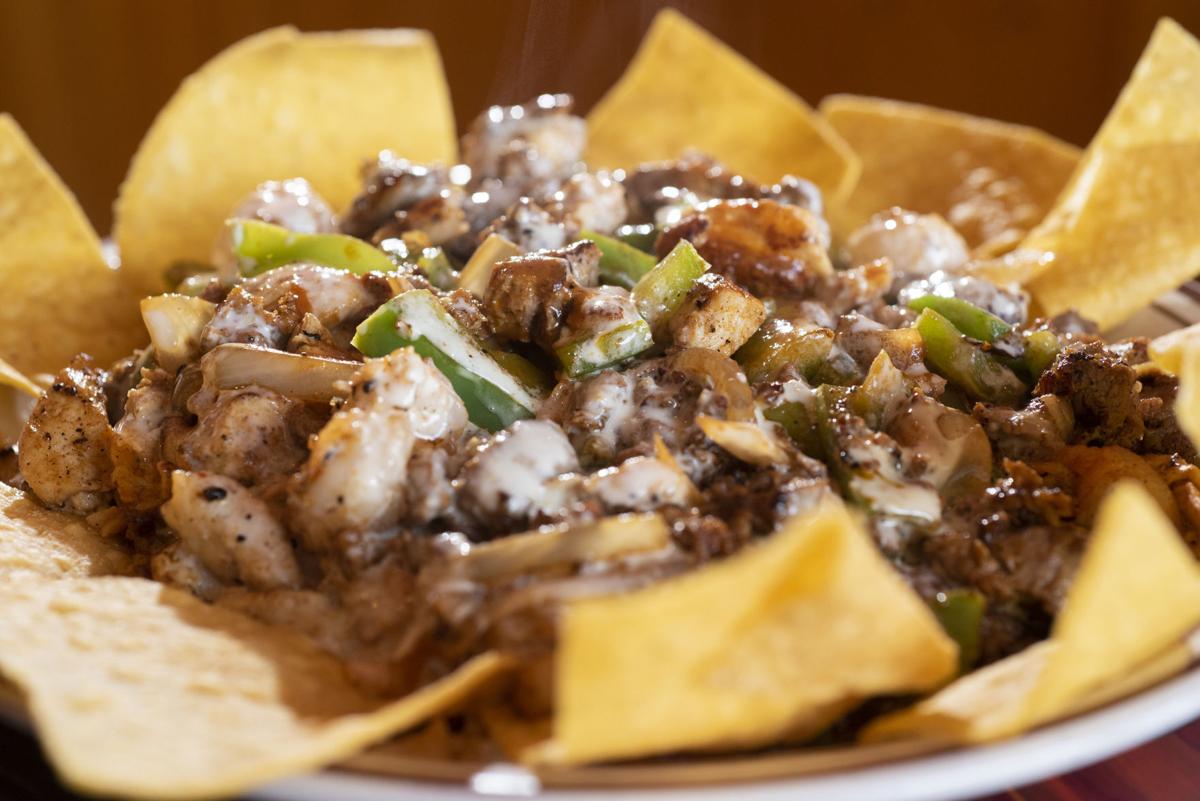 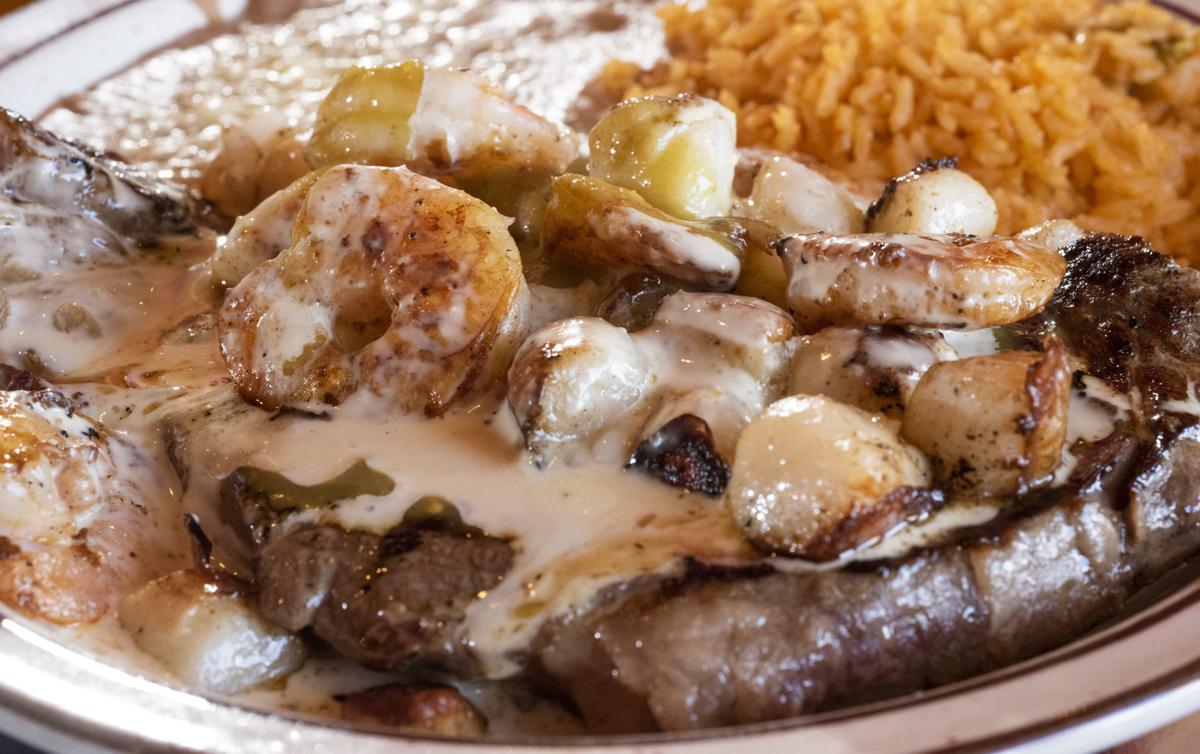 The steak veracruz at Los Toltecos, which in clouds a seasoned t-bone steak topped with shrimp, scallops, cheese and green tomatillo sauce. 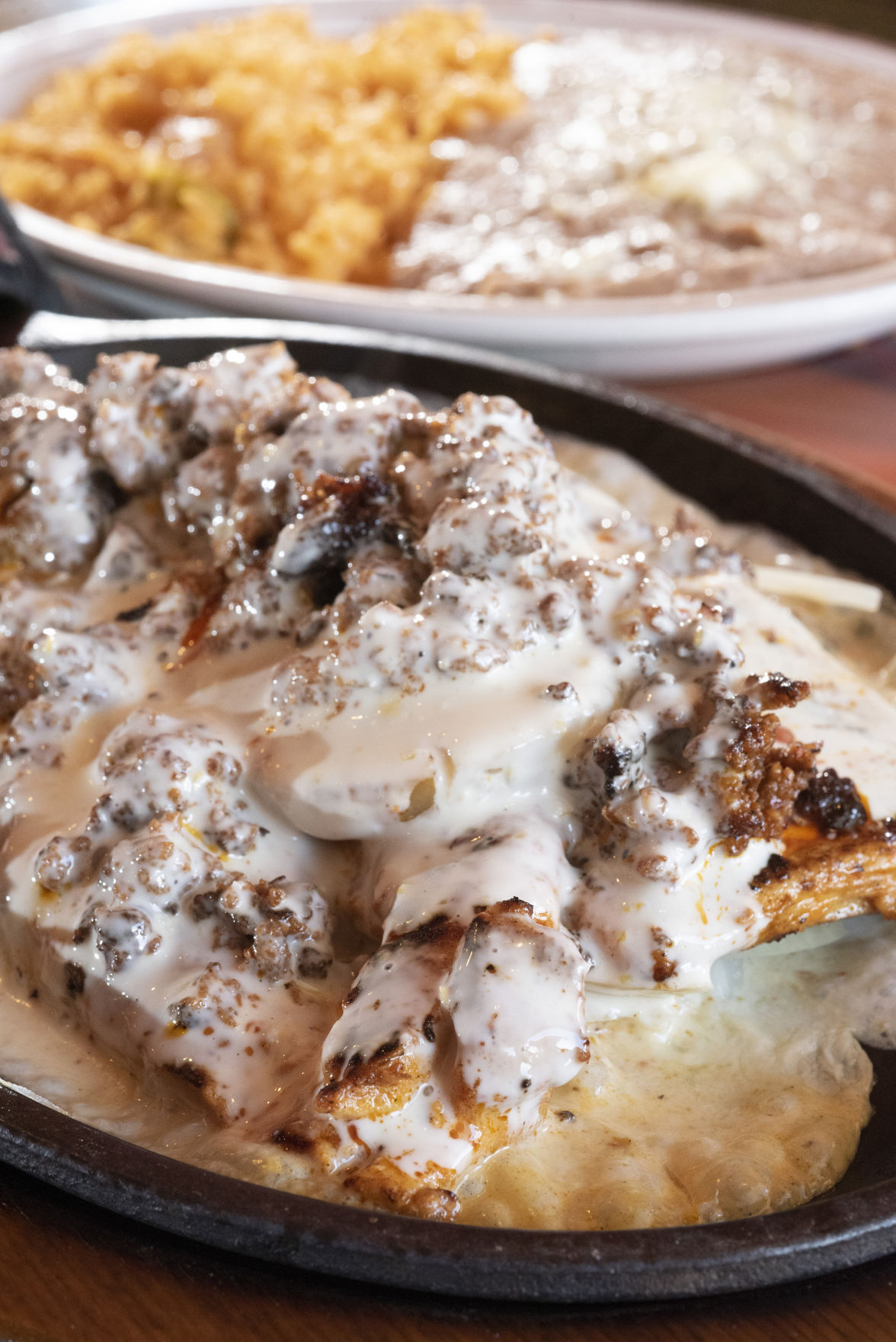 The pork enchiladas at Los Toltecos, located in the Frederick Shopping Center on W. 7th Street.

The steak veracruz at Los Toltecos, which in clouds a seasoned t-bone steak topped with shrimp, scallops, cheese and green tomatillo sauce.

Frederick County has been blessed with endless options of Mexican and Latin American food. From small taco bars and food trucks to more elegant, sit-down restaurants, the choices are abundant.

One option for Mexican food is Los Toltecos, located in the Frederick Shopping Center on Seventh Street. Boasting authentic Mexican cuisine, Los Toltecos in Frederick is one of five locations and the only one in the state of Maryland.

The menu is unique and includes some fun options, but during my week of eating at the establishment, most of the time I left feeling less than impressed.

Now, I enjoyed a few dishes, such as the Mexican Jambalaya. When I first saw this name on the menu under the appetizer section, I was more than intrigued. How could you do a Mexican take on a Cajun dish? The menu stated that it was one of the restaurant’s most popular appetizers, and after trying it, I believe it. Shrimp, chicken, steak and chorizo are tossed and sautéed with peppers, onions and rice. It comes out piping hot, slathered with a queso-like cheese sauce, with lots of red enchilada sauce and a side of tortilla chips.

Personally, I felt the chips weren’t totally necessary, as this appetizer is great as is and simply eaten with a fork, but if you want a little extra crunch, the tortilla chips do the trick.

The appetizer is large enough to be shared among three or four people, and it has lots of Mexican flavor with a good amount of heat and saltiness emblematic of traditional jambalaya.

For the main course, two of the better meals I had while dining at Los Toltecos were not burritos or tacos or anything traditional but rather actual entrees.

The “Chori-Pollo” is a new item on the menu, and it is a must-try. Thick slices of grilled chicken are topped with crumbly chorizo and sweet slices of pineapple as well as some more of the aforementioned cheese sauce. It’s a perfect sweet, savory and spicy dish and comes with a side of Mexican rice and refried beans. If you like Al Pastor tacos, this will be an excellent dish to try, as it holds a lot of the same flavors (and since it isn’t a taco, it’s less messy). I hope this dish continues to stay on the Los Toltecos menu, as it’s one of the more innovative and delicious Mexican dishes I’ve seen in a while.

Another option — and great for steak lovers — is the Steak Veracruz. A medium-cooked, T-bone steak is topped with shrimp, scallops, cheese sauce and green enchilada sauce, as well as Mexican rice and a choice of refried or black beans.

I loved this Mexican-style surf and turf combination, and the enchilada sauce took the flavor to the next level. The only aspect of the dish I was disappointed by was the actual steak, which didn’t seem to be seasoned. There was a lot of flavor to be had from the other ingredients on the plate, but the steak itself was bland and could have contributed more to the overall richness of the entree.

I was impressed with some of the more unique entrees but disappointed by the lack of effort that seemed to be employed with the more traditional Mexican dishes. What is a Mexican restaurant if the tacos and burritos are not up to par?

The pork enchiladas were particularly a letdown. The pork, too, was unseasoned and dry, and it seemed as if it had simply been stuffed into a corn tortilla and rolled up when the order was placed, instead of being baked like traditional enchiladas are. There was minimal enchilada sauce and no cheese, making the dish completely unsatisfactory.

A guest of mine, during one visit, ordered the Burrito Deluxe, which is one chicken burrito and one ground beef burrito. Similar to the pork in the enchiladas, the chicken was dry and lacking flavor, and the ground beef seemed like it had been sitting around for a while.

The guacamole was so blended down, it was practically a cream, and there wasn’t one hint of salt or lime. There appeared to be little, chopped-up pieces of jalapeno sparsely sprinkled throughout, but for the most part, what was served was solely avocado and didn’t seem fresh.

Los Toltecos has some good options on their menu if you’re craving something a little different, but otherwise, it might not be the best spot to visit if you’re looking for good Mexican food. I hope the restaurant steps it up and becomes a more premier option for good drinks and eats, otherwise it will fade away into the background and become an afterthought of where to get a good burrito or stack of tacos in Frederick.

Will try Los Toltecos next!! Sounds like they have a few interesting dishes.

But do they play a national anthem when you’re trying to eat? Can you eat and virtue signal at the same time?

There food is very traditional Mexican which is a crisp and processed like other chains. Still good and I go there often.

I am smelling a hint of bovine discrimination here in our dairy county.

"...and the ground beef seemed like it had been sitting around for a while."

That is not necessarily a bad thing. It just means the meat product is coming from cows with no legs. Ground beef is amazingly tasty most of the time, especially on my grill.

You can never fail with Taco Bell. You might have an epic failure two hours later in the bathroom, but that will be your own personal issue.

Taco Bar on West Patrick and California Tortilla off of Route 26 my favs. And my homemade Ortega shell tacos with Ortega seasoning. 12 taco shells just $1.89! Old El Paso a go to also.

Last year, I got some delicious meals from there (from a food delivery service). Everything was well-prepared and wonderful. I miss it. And, their food was far superior to other Mexican restaurants that were supposedly some of the best restaurants (of that type) in Frederick.

The fajitas are great! And I love the guacamole.

Never been. So.many.opportunities here to share paragraph content privately with the owners and just alluding to it with readers. Already challenging times for restaurants without a "don't eat here" neon sign. Our daughter loves this place but she moved away.

We love Los Toltecos! Sorry that the critic didn’t find it to her liking. The service is fast and the food is delicious. Their take on arroz con pollo is great.

I have never had a bad meal here.

The food is generally good and the service is always amazing. However, I love Chili Rellenos, but hate the potatoes they use to stretch the cheese. Can’t you give us an option? Would pay more to have it cooked correctly..