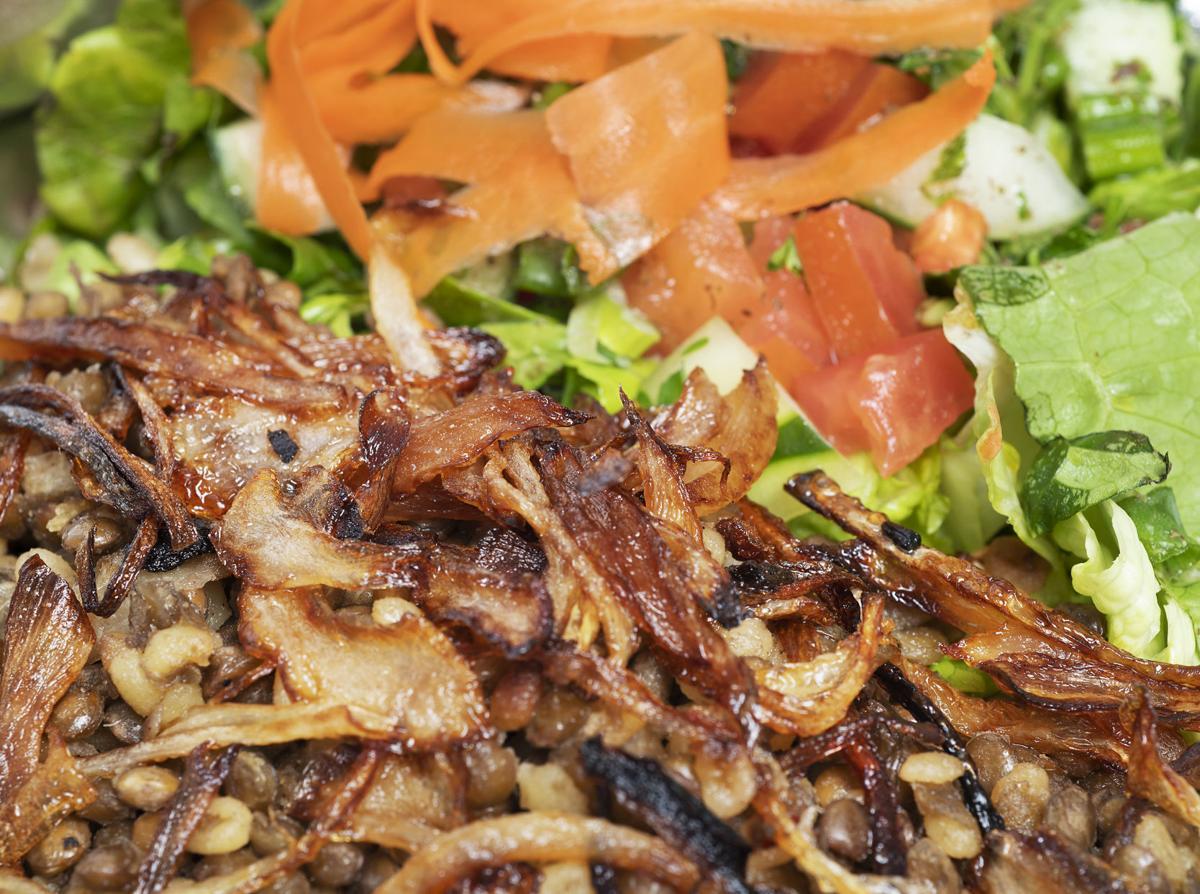 The Mujaddara appetizer, one of the Middle Eastern and American items on the menu at the Potomac Street Grill in Brunswick. 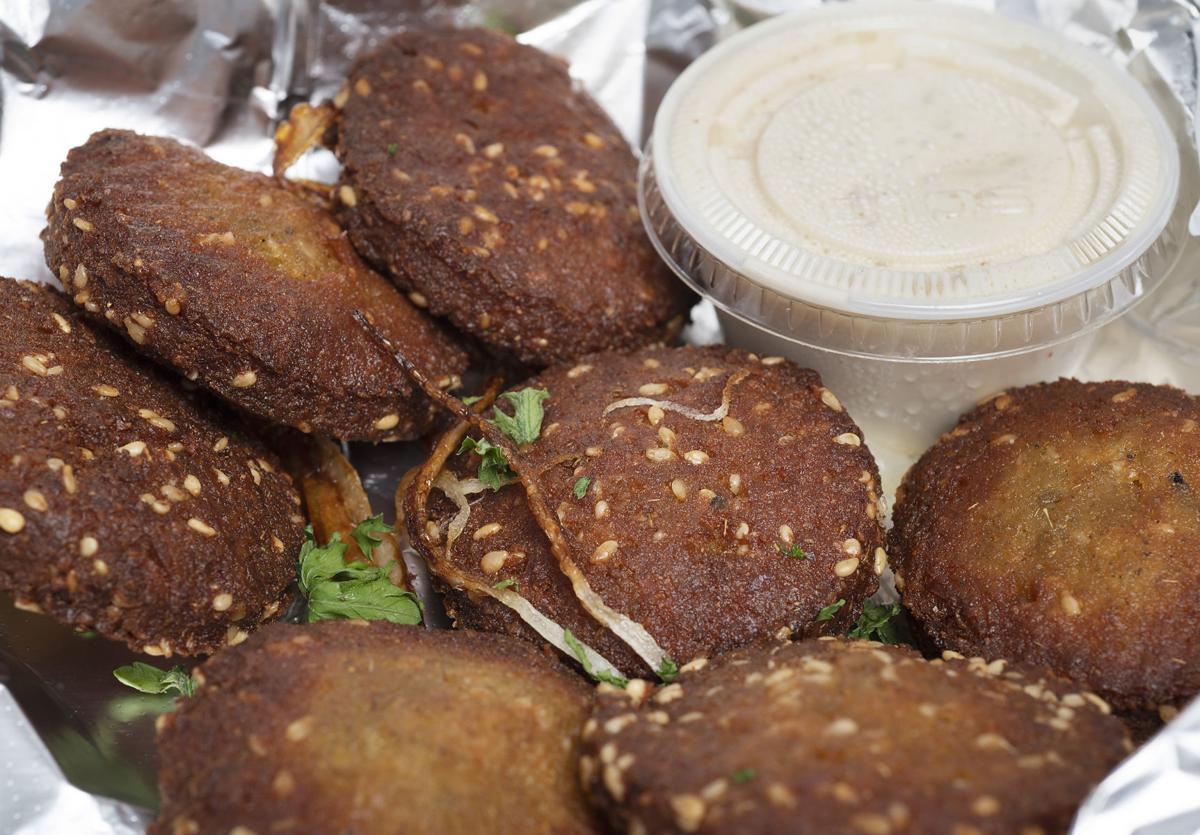 The falafel, one of the Middle Eastern and American items on the menu at the Potomac Street Grill in Brunswick. They include fried vegetarian patties made from chickpeas, onions, Middle Eastern spices and fresh herbs, and served with tahini sauce. 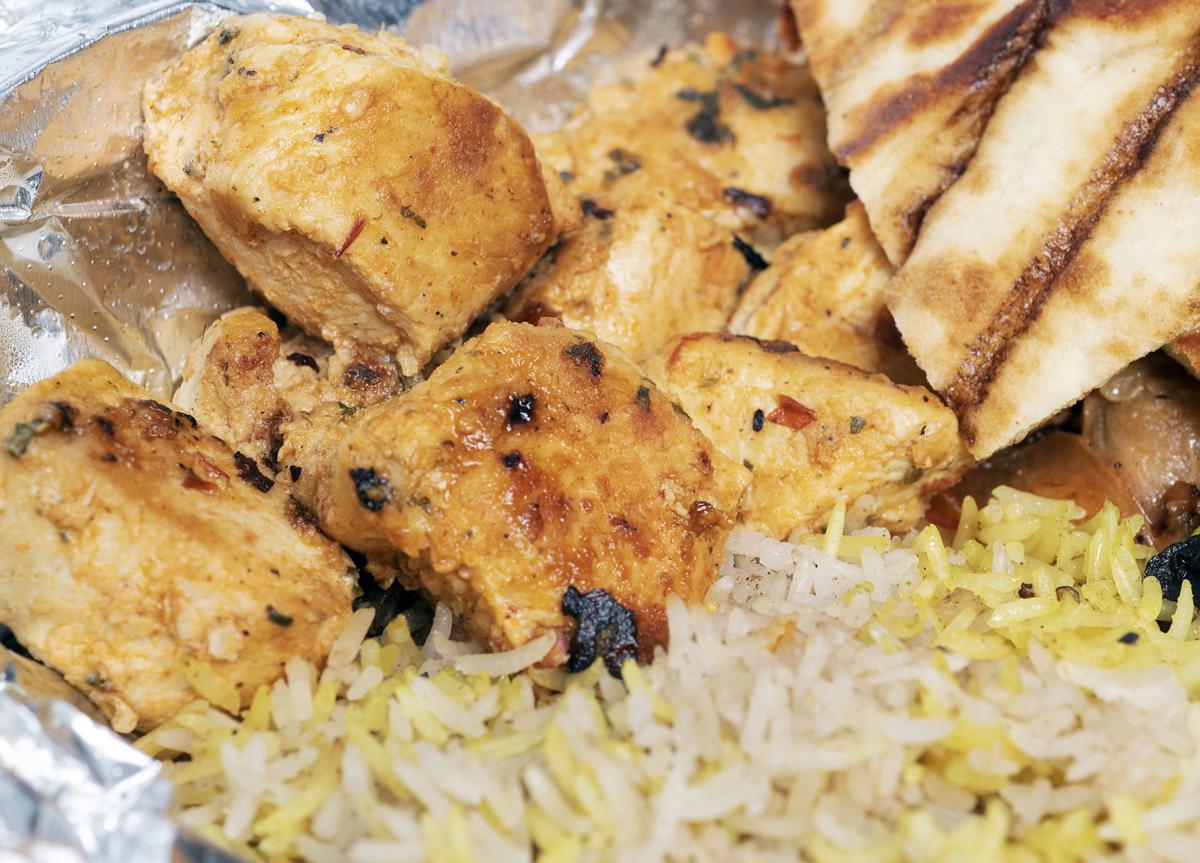 The chicken kabob platter on the menu at the Potomac Street Grill in Brunswick. It features grilled marinated chicken over grilled vegetables and served with rice and a warm flour tortilla.

The Mujaddara appetizer, one of the Middle Eastern and American items on the menu at the Potomac Street Grill in Brunswick.

The falafel, one of the Middle Eastern and American items on the menu at the Potomac Street Grill in Brunswick. They include fried vegetarian patties made from chickpeas, onions, Middle Eastern spices and fresh herbs, and served with tahini sauce.

The chicken kabob platter on the menu at the Potomac Street Grill in Brunswick. It features grilled marinated chicken over grilled vegetables and served with rice and a warm flour tortilla.

You probably wouldn’t even know it was there unless you looked for it and actively sought it out. That’s what happened to me when I was searching for a restaurant to review this week and I stumbled upon Potomac Street Grill in Brunswick.

After viewing a less than stellar website boasting a mix of American, Tex-Mex and Middle Eastern cuisine, I decided to drive the 25 minutes along Route 15 and check out the intriguing establishment. And over the course of three visits I found that this random spot for Middle Eastern food gave me a feeling of homeliness that I haven’t yet found at any other restaurant in the Frederick area.

Maybe it’s the owner Abed Alkteifan and his employees, who are truly some of the friendliest and most welcoming I have ever come across. Or maybe it’s his food – one sniff of which transported me to my own mother’s kitchen and made me feel at ease.

Let’s start with the rice. Available as a side to almost every single item on the menu, you would be missing out on a flavor stronghold if you didn’t order it.

Most restaurants could make rice a side dish option and keep it plain and it would work, but Potomac Street Grill takes it to the next level. A mixture of white and yellow grains, every single bite bursts with flavors like cloves, cardamom and black peppercorns. It reminded me of my family’s version of ghee rice – a south Indian aromatic rice dish.

And it has a little bit of a crunch too, which surprisingly made it even more delectable. I suggest ordering it alongside the chicken kebab platter. The chicken is perfectly cooked and has one of the most simple but elegant flavor profiles. I wouldn’t be surprised if the seasoning was a simple mix of salt, pepper and paprika, but it’s cooked so well — lightly pan-seared and golden brown — that it’s as delicious as the rice.

If you visit and one of the daily specials is spanakopita, order it. Traditionally, spanakopita is a Greek spinach pie piled high with layers of spinach and feta all sandwiched between delicate layers of phyllo dough.

The spanakopita at Potomac Street Grill, however, whittles it down into hand-held, almost bite-size triangles, similar to a samosa.

They come out piping hot, clearly having just been fried in hot oil, and one bite will have you throw away all your former loves of fried food. It’s so hot and juicy, the spinach and feta practically ooze out of the pastry – but in a delicious way. I ended up practically eating the whole plate, which comes with about seven to eight triangles of spanakopita joy.

Another great appetizer option if you’re not into spinach is the falafel. Potomac Street Grill serves up almost perfect falafel — crispy on the outside, soft on the inside — flecked with sesame seeds and served with a side of tahini sauce. It doesn’t get much better than that.

I will admit that I thought the chickpea dish could have used a touch more salt, but the tahini and pickles served alongside it somewhat made up for it. The pickles, by the way, are served with almost all the dishes at Potomac Street Grill and I found them to be a nice little tastebud distraction when I needed it.

Mujaddara has been a staple of Middle Eastern food for centuries. Its roots can be traced back to Iraq in the 1200s. It’s a simple dish, but the epitome of comfort food. Lentils, sautéed onions and a little bit of rice are all cooked together in spices like cumin and coriander.

It was the smell of the mujaddara that took me back to my family’s kitchen, not because we ever made mujaddara, but because those same spices and ingredients have graced our stoves for years, just in our own version.

Try one bite and I promise you’ll be hooked. And if you’re wanting a little more tang to your mujaddara, ask for Potomac Street Grill’s special pomegranate sauce. It was recommended to me during a visit and it adds a whole other flavor to an already wonderful dish.

Potomac Street Grill might be a little out of the way for some in the county but if you appreciate authentic food, a welcoming smile and feelings of warmth, the drive is worth it.

I can say with confidence that Potomac Street Grill is one establishment I will most certainly be returning to.

Love this place- my favorite is the sujok which is a spicy-sweet beef and lamb sandwich. Glad to see them get some spotlight!

Also, I think the author meant to say rt. 340, not rt. 15. But it is in Brunswick across from the public parking lot.