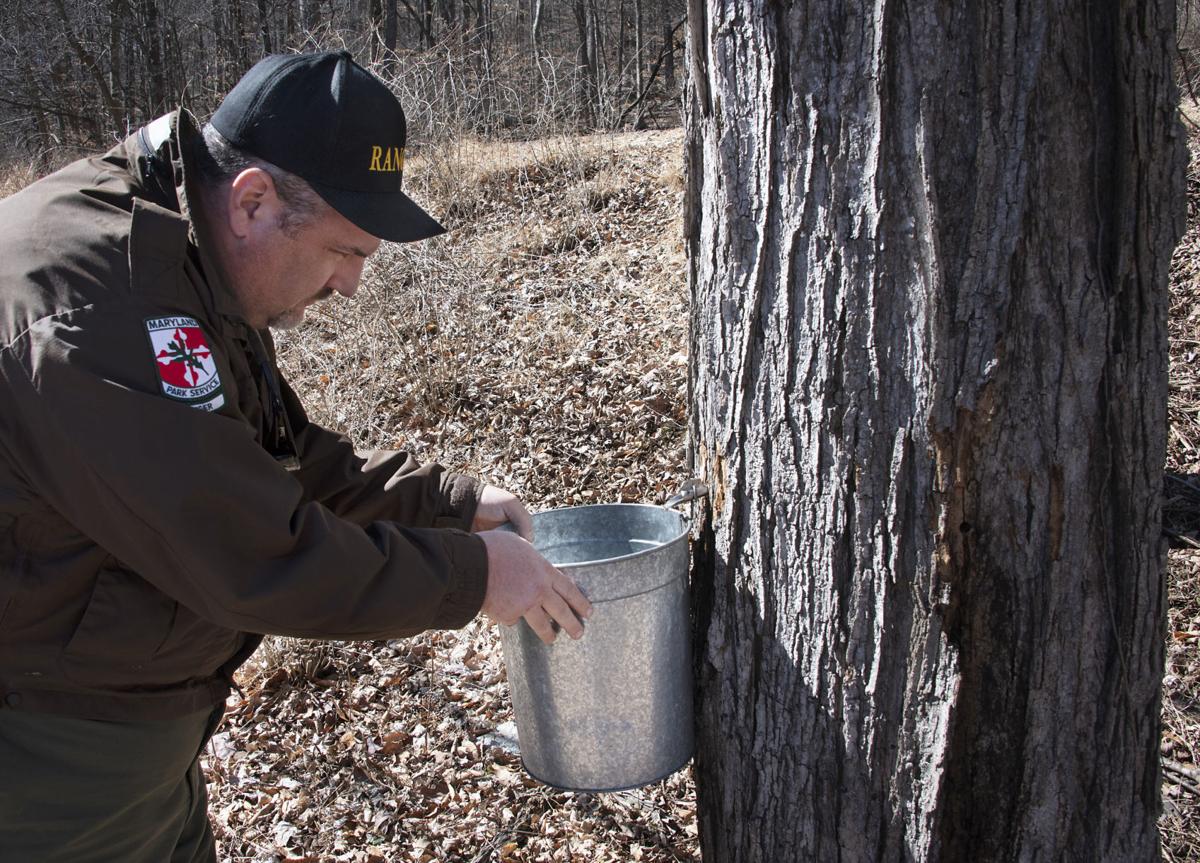 Ranger Eric Creter places a collection bucket under a tap in a maple tree at Cunningham Falls State Park. 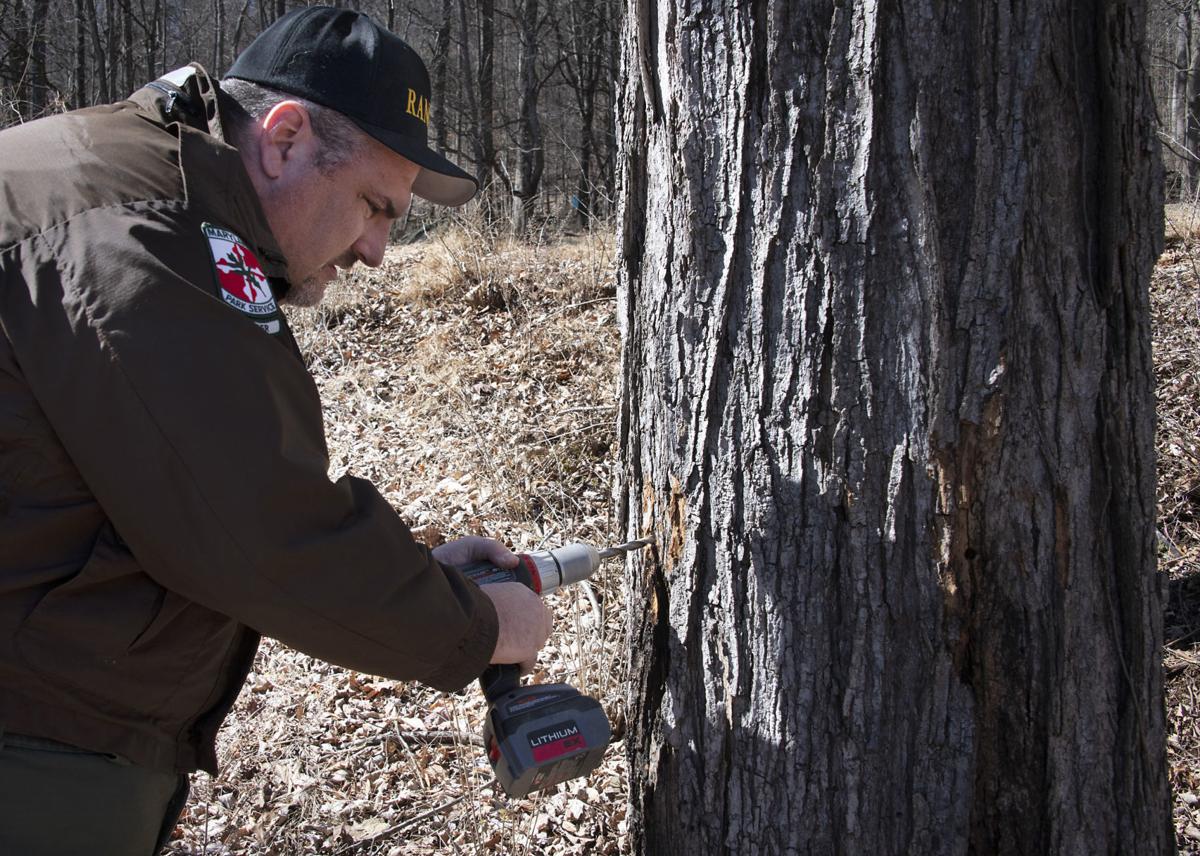 Ranger Eric Creter demonstrates drilling a hole in a maple tree recently to collect sap for maple syrup. Creter will be one of the rangers demonstrating the sap to syrup process at the annual Maple Syrup Festival at Cunningham Falls State Park. 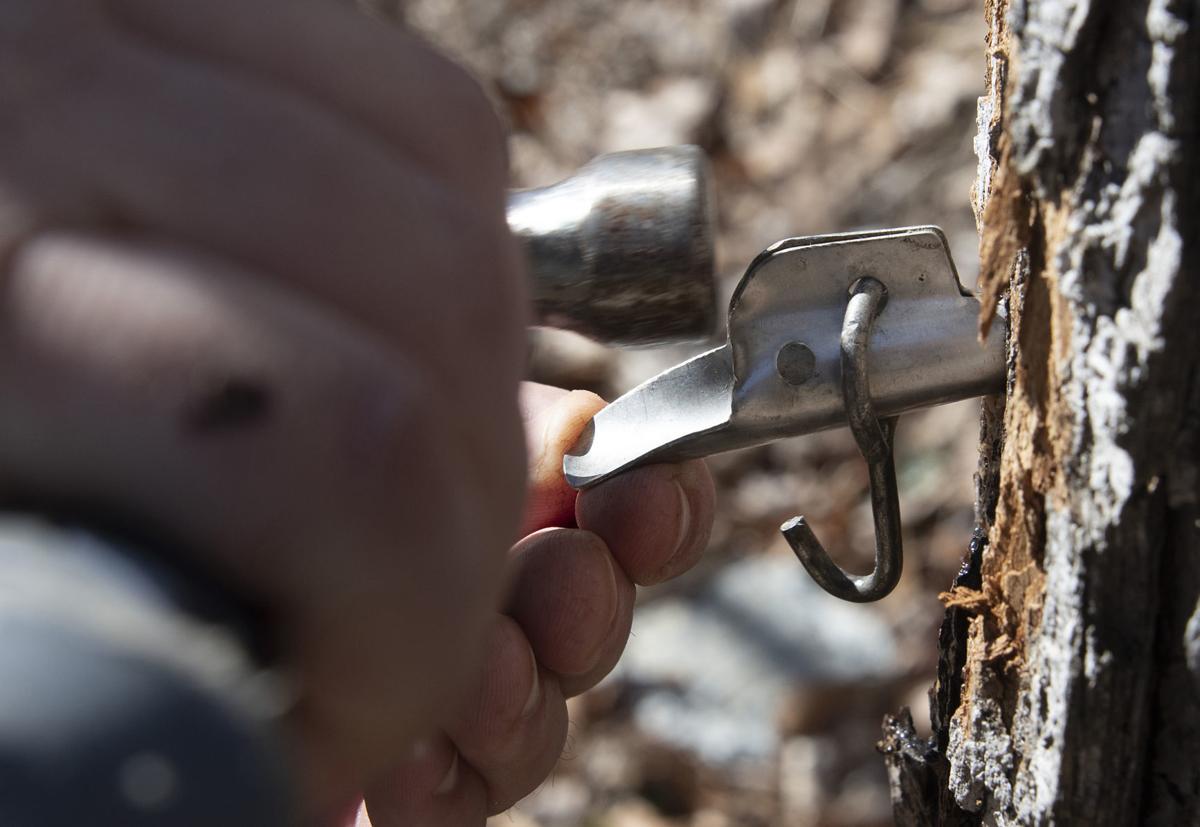 A tap to gather maple sap is hammered into a maple tree recently by Ranger Eric Creter. 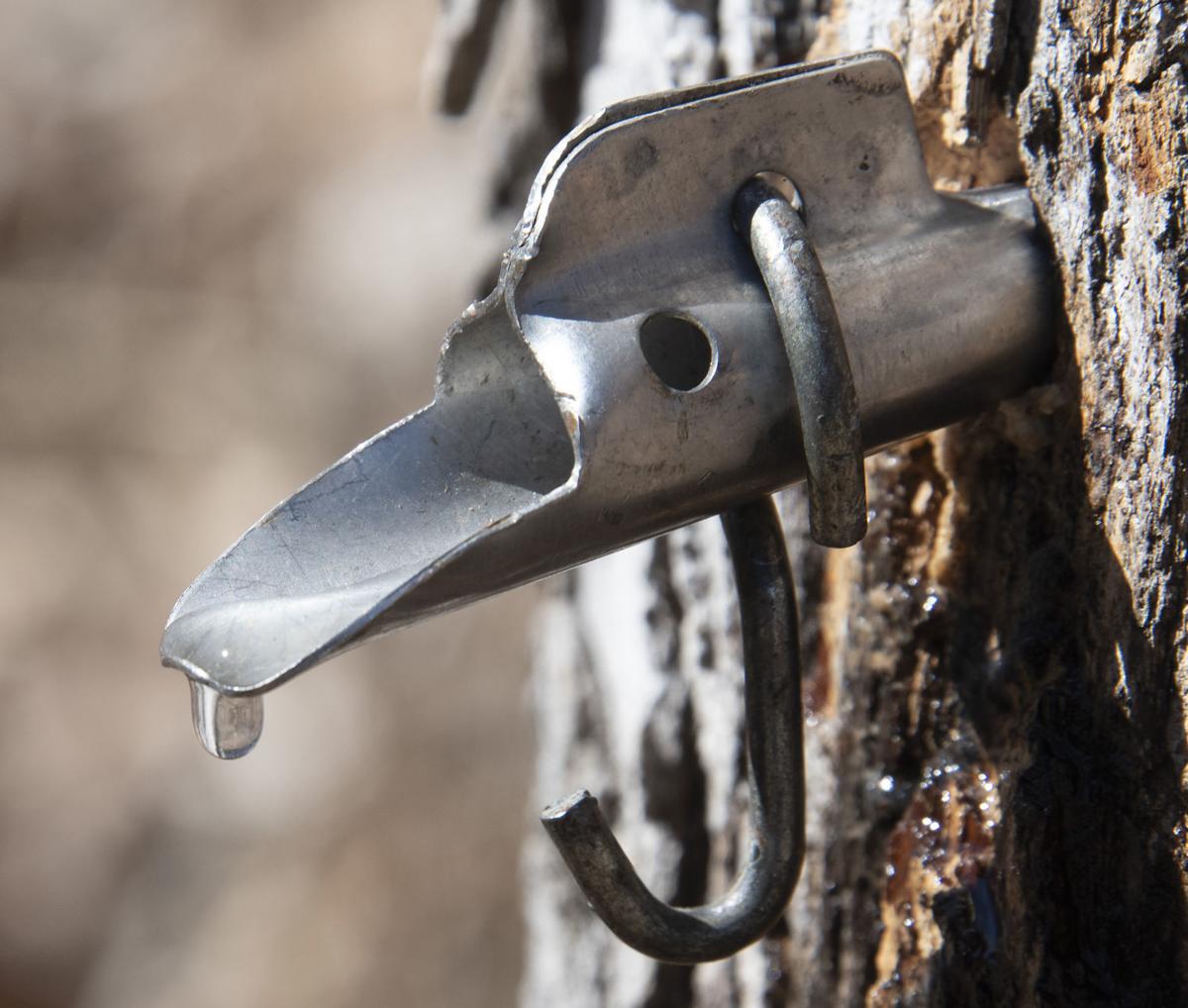 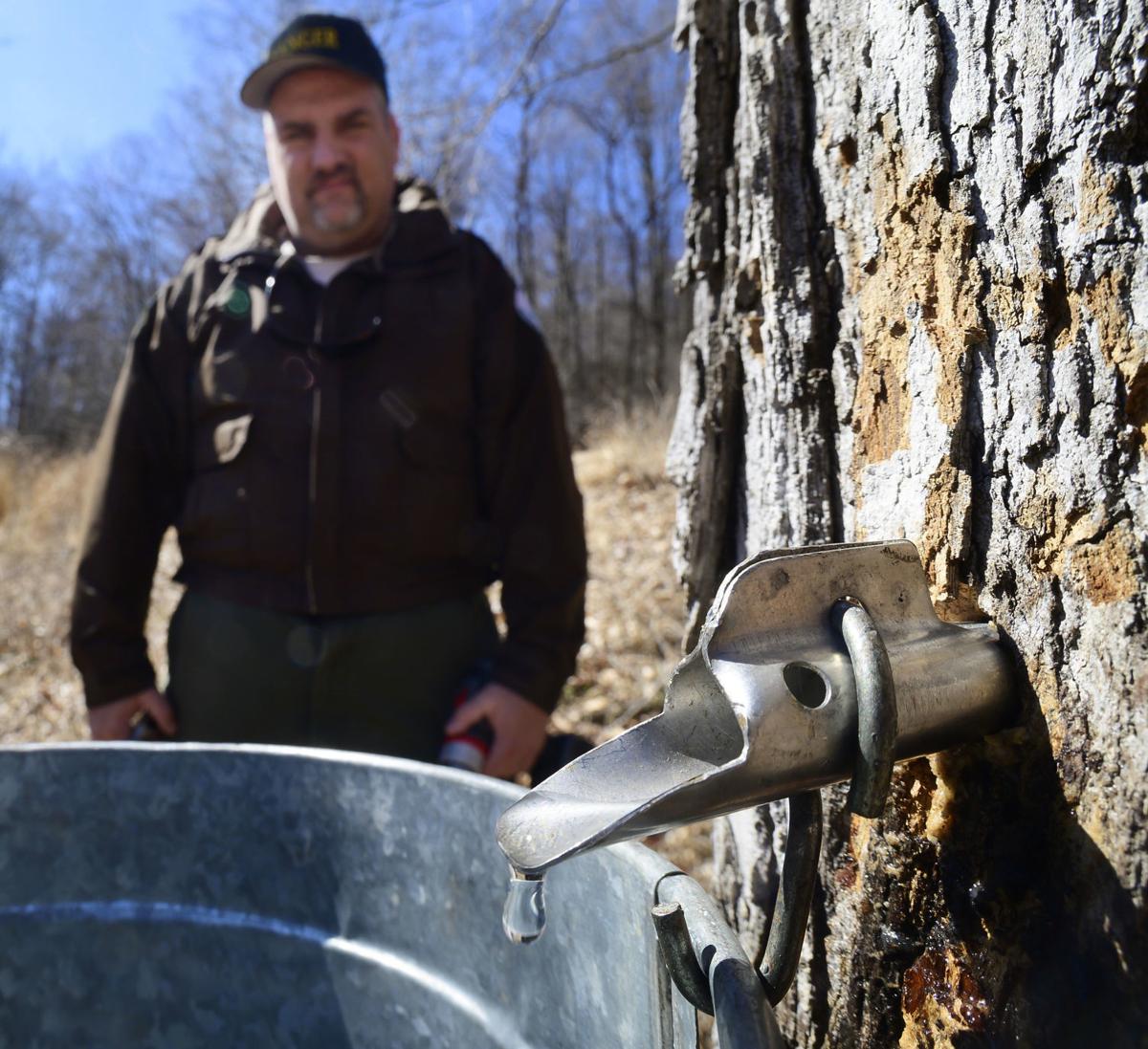 Fresh maple sap recently drips into a bucket at Cunningham Falls State Park. Looking on is Ranger Eric Creter. Creter will be one of the rangers demonstrating the sap to syrup process during the annual Maple Syrup Festival at the park.

Ranger Eric Creter places a collection bucket under a tap in a maple tree at Cunningham Falls State Park.

A tap to gather maple sap is hammered into a maple tree recently by Ranger Eric Creter.

Fresh maple sap recently drips into a bucket at Cunningham Falls State Park. Looking on is Ranger Eric Creter. Creter will be one of the rangers demonstrating the sap to syrup process during the annual Maple Syrup Festival at the park.

Editor's note: The Maryland Department of National Resources announced Thursday that the Cunningham Falls Maple Syrup Festival scheduled for two weekends, March 14-15 and March 21-22, has been canceled in order to protect the public during the COVID-19 pandemic.

Since 1970, people have gathered at Cunningham Falls State Park for two weekends in March to celebrate the sap that flows from the trees.

Marking its 50th year, the annual Maple Syrup Festival is set for Saturday and Sunday, and again March 21 and 20 at the Thurmont park.

The event features a pancake breakfast, sugar tapping demonstrations, children activities, live music and, of course, Maryland maple syrup sales. New this year will be an antique tractor display and the ability to accept credit cards for food and merchandise. The entry fee will still be cash-only.

Ranger Mark Spurrier, the park manager for Cunningham Falls and Gambrill State parks, has seen the event up close for more than 20 years as a seasonal employee and later as a ranger. He said that’s not as long as some staff members who have been involved with the Maple Syrup Festival from the start.

“Originally, it began as a concept program back in the 1970s between the Catoctin Mountain and Tourism National Park,” he said. “They started working on a heritage program about the art of maple syrup making and then that turned into the demonstrations we have today.”

In 1972, Cunningham State Park officially got involved with the event.

Mike Irons, the owner of Ole Mink Farm Recreation Resort in Thurmont, has been a part of the festival since he was a college student. His parents, the late Pat and Gordon Irons, became involved in helping set up the festival before the park took it over. The event quickly became a family affair, Irons said.

“They wanted to have folks experience what the maple syrup process is all about with a demonstration-type exhibit,” Irons said.

But it wasn’t until park officials decided to add a pancake breakfast to the event, promising real Maryland syrup, that he said the festival stated to gain in popularity.

“The one stipulation that they had as a group was that it has to be Maryland syrup,” he said.

Irons said the only problem was that no one in Frederick County was producing syrup in those early days. That’s when they decided to reach out across the state and found S&S Maple Camp, outside of Cumberland.

“We’ve had them ever since,” Irons said.

Although there’s a lot of pre-planning for the Maple Festival, which starts as early as September, Spurrier said the physical aspect of tapping the trees doesn’t happen until late February or early March.

Spurrier said they tap between 25 and 30 trees annually, and they have to be either a red or sugar maple. The trees also have to be fairly large with a trunk with a 12-inch circumference. He said if the trunk is too small, tapping the tree could damage it.

The sap is first collected around President’s Day in February and continues into March.

“If you were to drive to the park today, you’d see the buckets hanging on the trees that are being collected,” he said.

Irons said it will likely be a short year for tapping, as the trees need warm days and cool nights. He said that has not been the case this season.

“That transition of temperatures draws sap out of the roots of the trees up into the crown of the tree,” Irons said. “All of a sudden the trees are starting to get red and it’s like ‘Oh yeah, the buds are coming.’ It’s like a new beginning.”

It takes nearly eight hours to turn sap into syrup, Irons said. Once the sap is collected, he said it’s boiled for hours until it turns into the consistency of syrup. The reason is that the sap is mostly water.

Spurrier said they will show two types of syrup-making during the festival. One is using an evaporator, which he described as a long pan that quickly heats up the sap to make the syrup move quicker. The other way is boiling it in a kettle, which is the way the Colonists would have made syrup, he said. There will be a sign language interpreter on Sunday for the demonstration.

Irons said he looks forward to the Maple Syrup Festival, which has become his own springtime tradition.

“When maple syrup time is here, spring is here,” he said.

Spurrier said the festival is a simple, family-fun event, but that’s the beauty of it.

“What I love the most about it and I can truly say is it’s just the sense of family and camaraderie that we get out of it,” he said.

As the largest event of the year, Spurrier said the Maple Syrup Festival has so many volunteers, including friends and co-workers from other parks.

“It’s really something that is very unique to our culture that involves the state park. It’s kind of that event that sets us up for the rest of the year,” he said.

Before visitors leave, Irons said they have to sample of the syrup. There will also be maple syrup available to buy.

“People say ‘Wow, that’s really good. What do you put in is?’ Like no, we don’t put anything in it. It’s all-natural. It’s just way the sap comes off a tree,” he said.

Cost: $3 per person; $2 for youth group members; free for children in safety seats. Money collected will be donated to Friends of Cunningham Falls & Gambrill State Parks.

10 a.m. to 2 p.m. — Sugaring demonstrations on the hour every hour at the Boiling Shed. Interpretive talks on the process and history will be given by the park ranger. Sign language interpreters are scheduled each Sunday.