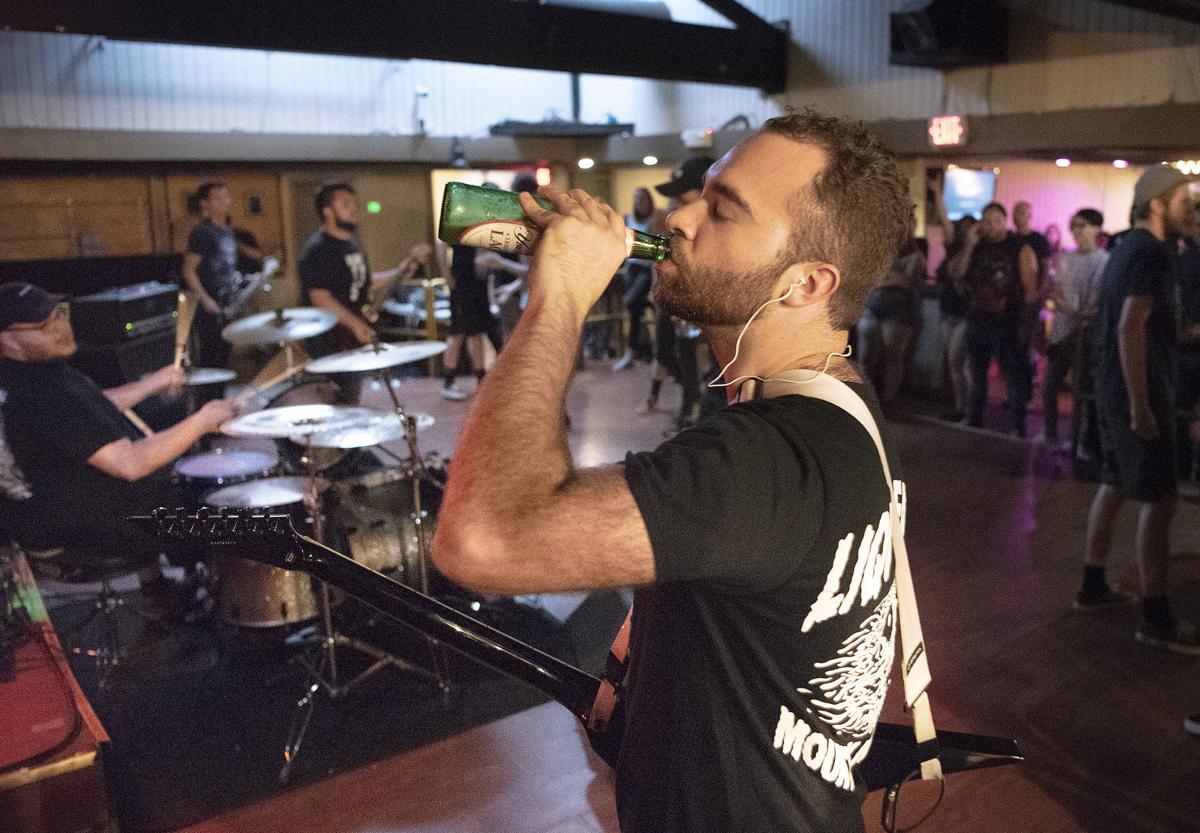 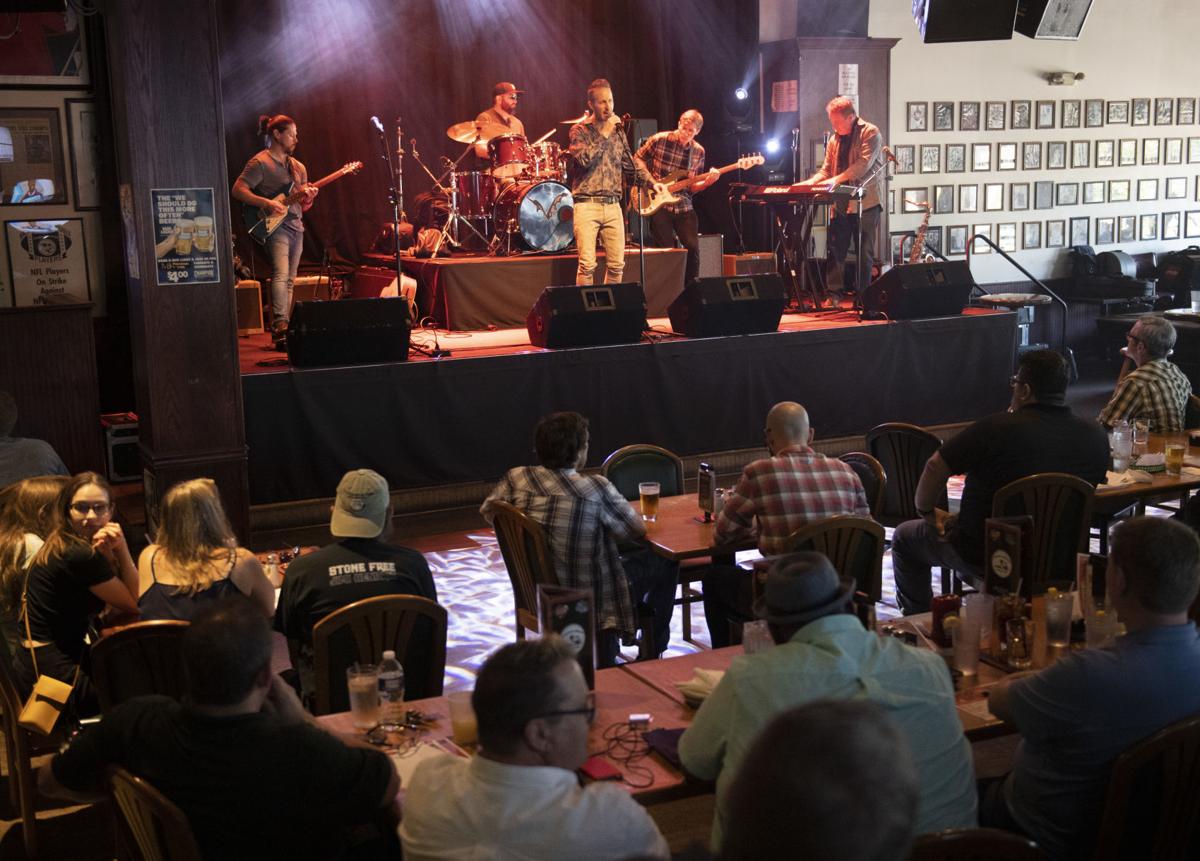 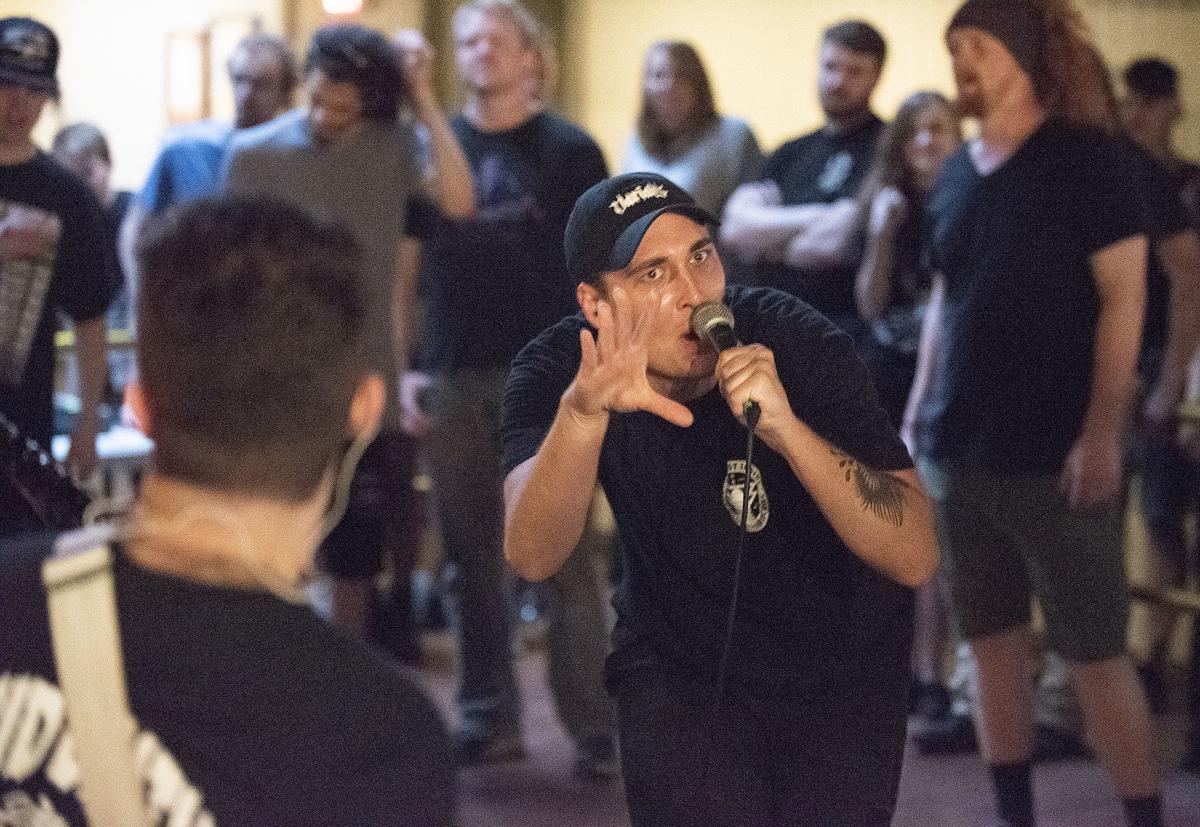 Tristan Gleason, lead singer for Gradual Slip, belts it out during a performance last week at Cafe 611. 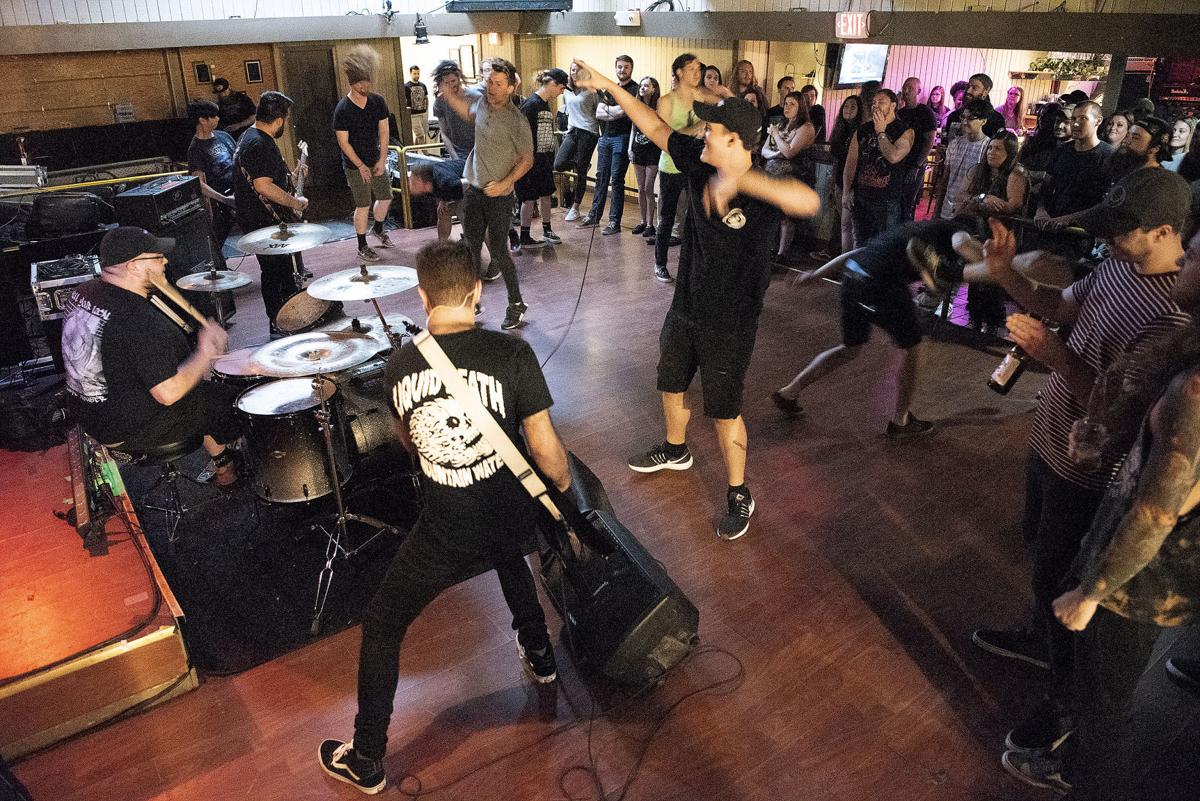 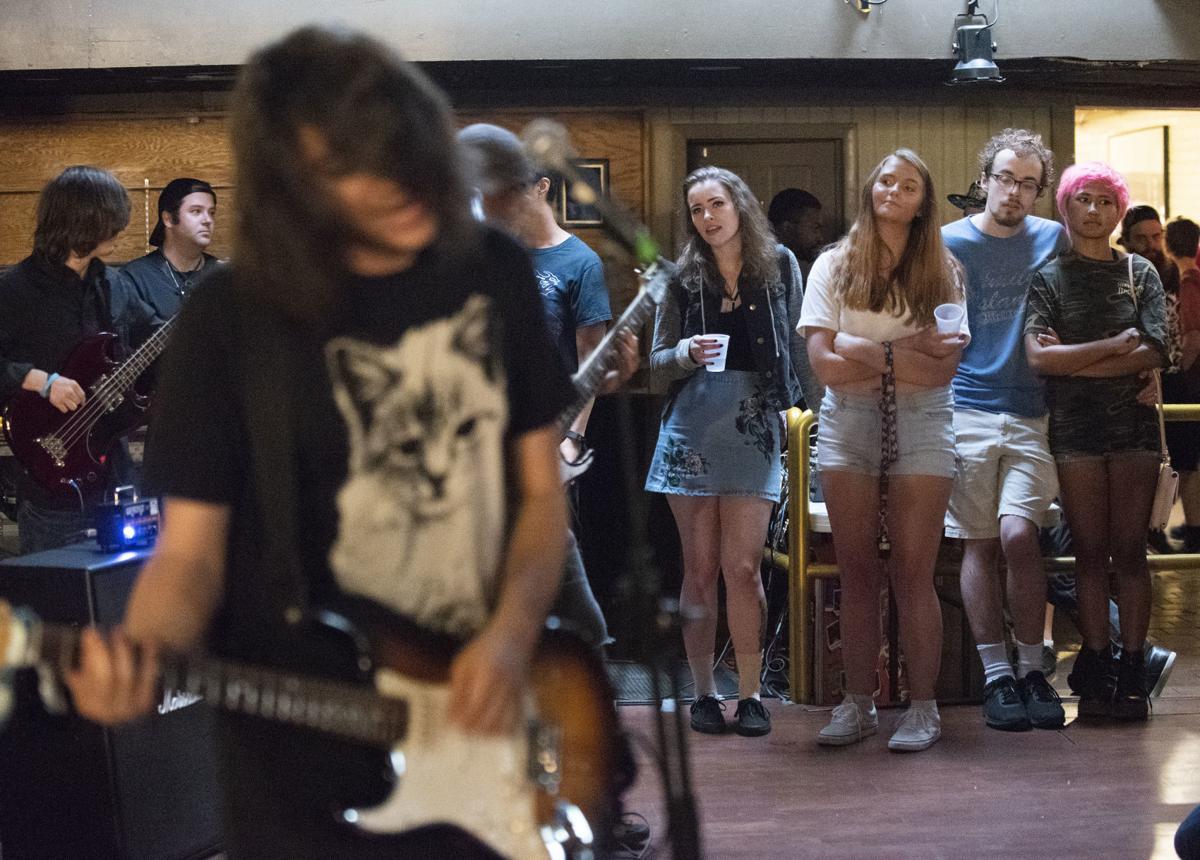 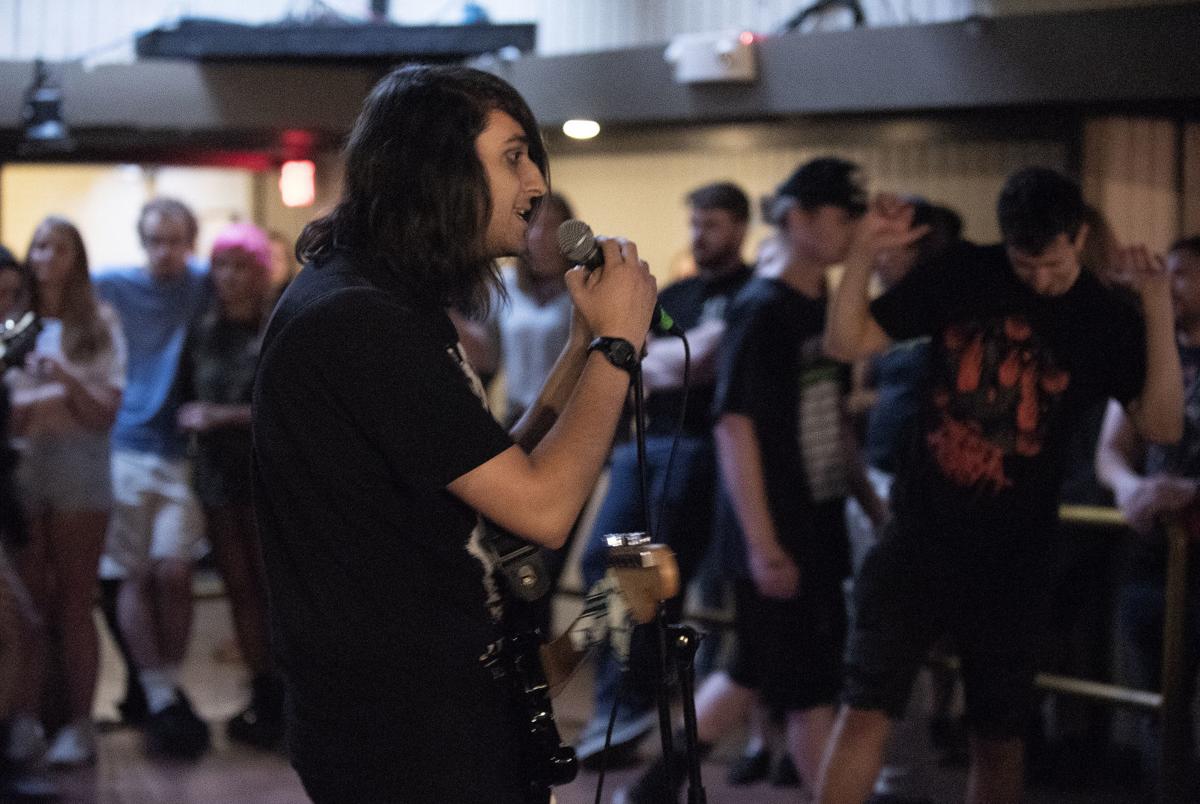 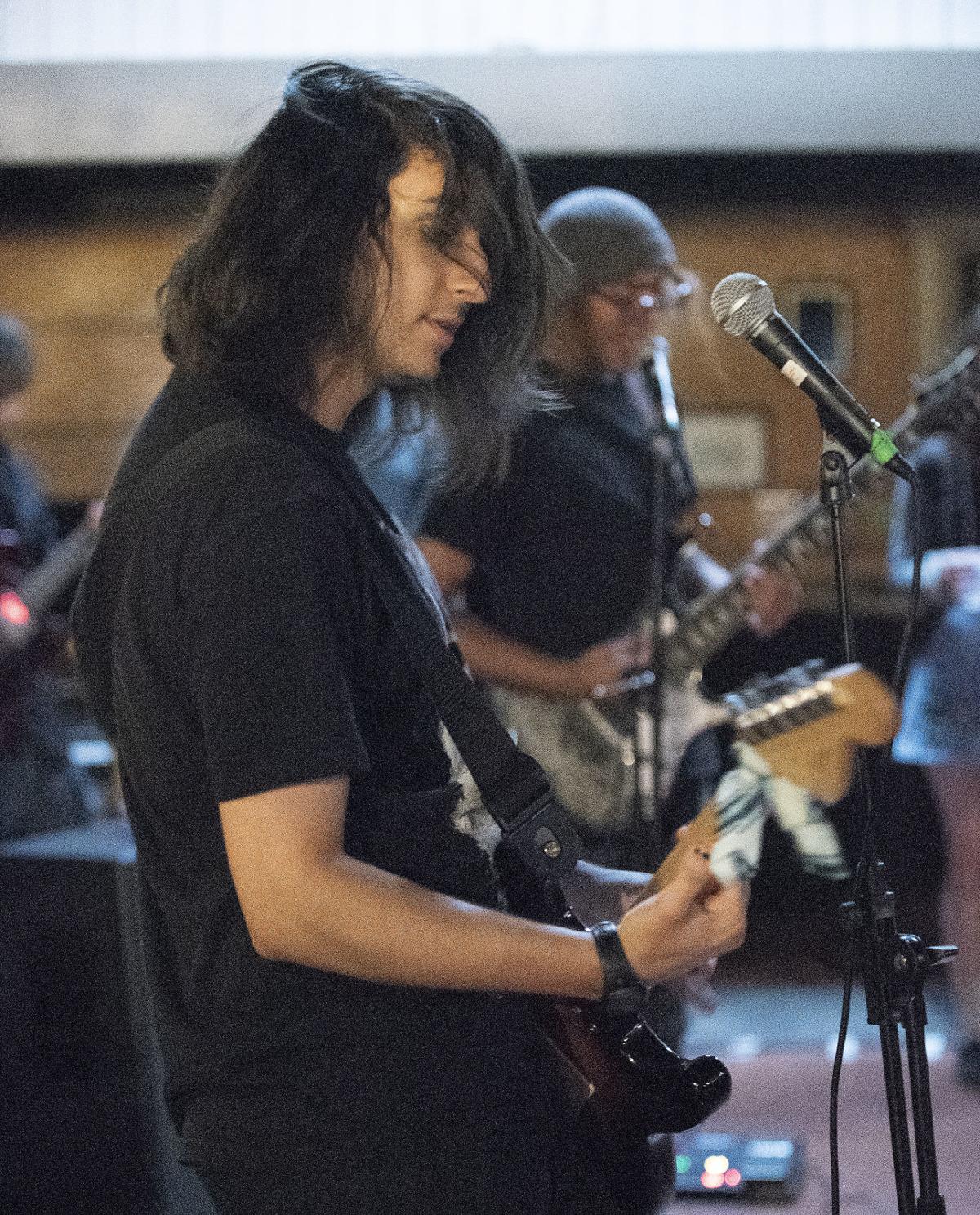 Tristan Gleason, lead singer for Gradual Slip, belts it out during a performance last week at Cafe 611.

By day, local freshman delegate Ken Kerr is a Democratic state legislator and a professor at Frederick Community College.

By night — occasionally — he’s a guitarist with The Nightcrawlers, a Frederick-based rock-and-roll band.

“Though I kind of had to ease up on playing music when I decided to run again,” Kerr said with a chuckle.

Earlier in his career, at least 10 years ago, Kerr got back into the local music scene when a couple of friends invited him to play with them at Venuti’s, a now-closed downtown restaurant in the same space as JoJo’s Tap House. That night, Kerr ordered a beer and headed onstage for the performance. His friends, surprised, blocked him from taking the stage.

“They told me, ‘You can’t bring alcohol up here,’” Kerr said. “They were really strict about it. Everyone was taking it really seriously.”

He was surprised, too, but he finished his beer at the bar. For the next decade, he ran across the regulation whenever he played in Frederick — every bar, every stage, every venue.

“After I was elected, I looked into it, and Frederick County was the only county in Maryland, to my knowledge, that had such a regulation,” Kerr said.

It chafed at him, at least a little bit. A musician first, Kerr knew that bands are hired primarily to attract and keep customers at the bar. And even though the no-drinking rule applied specifically to “band members” under the county’s liquor ordinances, the regulation was applied across the board to all performers, including the comedians at downtown restaurants.

To Kerr, it just didn’t make sense. For both performers and their fans, part of the fun is drinking together.

“Sometimes fans like to buy the musicians a beer,” he said. “Or the bands like to have a drink with them onstage.”

Plus, Kerr added, it’s not like musicians make a whole lot of money. Part of the incentive for playing, in some cases, is getting a few drinks on the house.

“I just thought it was a strange rule,” he said. “And I wanted to look into it after I was in a position to do something about it.”

This spring, Kerr partnered with Republican delegate Jesse Pippy, another first-term legislator who, before joining the General Assembly, served as a member and eventual chairman of the Frederick County Liquor Board. It was Pippy — as he likes to point out — who relaxed or reformed several of the county’s liquor laws, including one change that allowed license holders to serve alcohol an hour earlier on Sunday.

When Pippy did his own research, he realized that the ban against onstage drinking was a county-enforced regulation, not part of state legislation. In other words, the county giveth the ban, so the county can taketh away without having to go through the state legislature.

In June, Pippy attended the liquor board’s 2019 public forum and formally requested to remove the regulation from the books. As it turns out, the board stopped enforcing the rule almost a year earlier, “unless it’s a really blatant case with bad intoxication,” said coordinator Penny Bussard.

“Since it wasn’t enforced anyway, the board formally voted to remove the regulation through email two weeks ago,” Bussard added.

The measure still has to go through a public hearing on Aug. 19, but for all intents and purposes, the regulation is dead. It’s a rather unceremonious end to a local rule that’s annoyed both musicians and venue owners for at least 15 years.

“It was a pain in the ass,” said Randell Jones, the owner of local venue Cafe 611. “That’s really all it was.”

While local musicians quickly acclimated to the regulation, touring musicians — most of whom had never encountered a similar rule — were constantly reminded not to take alcohol onstage. At the restaurant, Jones sometimes enlisted a staff member to stand next to the stage and block musicians who tried to come up with a drink.

At Champion Billiards, one of the biggest venues in Frederick, musicians had to sign contracts agreeing to the local regulation, said owner Gary Allen. He posted signs around the stage, alerting performers to the rule, or reminded them if they looked like they were coming onstage with a drink.

“I don’t think anyone was purposefully trying to break the rules,” he said. “It’s just that most of them had never heard of anything like it. We have bands who play up and down the region, up and down the country, and they told me Frederick is one of the only places they’ve ever heard of that has this law.”

The roots of the regulation are arcane and mostly forgotten by the now-disbanded board that first passed the rule. Bussard said the formal language that “no band member shall consume alcoholic beverages while performing or on the stage” was officially passed in 2004, seven years before she became the board coordinator. But that date surprised former administrator Kathy Vahle Dean, who worked with the liquor board for 38 years.

“It seems like it goes back much, much farther than that,” Dean said.

It’s possible, she added, that previous boards enforced the policy by interpreting band members as “employees” of the venue before the formal language was passed. County regulations have long banned both license holders and workers at alcohol establishments from drinking on the job.

“All I can remember is that they used to have problems with the bands over-drinking and the bands and DJs encouraging the patrons to over-drink,” Dean said. “There were many, many incidents that the liquor board had to address.”

Erinn Percival, a longtime bartender now at Guido’s, can’t remember any specific series of incidents involving drunk musicians. But she does remember liquor inspectors beginning to reinforce the regulation five or six years ago. As far as she remembers, none of the bars downtown were actually cited for onstage drinking. Bussard can only remember a single incident, in 2014, when a violation was brought in front of the liquor board, and the case involved a temporary license holder — the Beer, Bacon and Music Festival — not a full-time licensee. The board suspended the penalties after a Sept. 8 hearing, Bussard pointed out.

Still, Percival said, the threat of a fine or disciplinary measures on the part of the liquor board were enough to make most venues self-enforce.

“Every place I’ve worked, the rules have been very, very simple,” she said. “If a musician is caught drinking onstage, the show will be shut down and they won’t get paid.”

Percival supported the regulation when it was still in place, she said, largely because it discouraged musicians from acting irresponsibly. But some performers said the rule felt a little infantilizing.

“As a professional musician, no one has to tell me not to get drunk and embarrass myself onstage,” said Neil Durr, who used to perform in Frederick with his band, SoulXchange, when the regulation was still enforced. “So, it wasn’t a big deal, but we all thought it was a ridiculous law. It made absolutely no sense at all.”

Pippy agreed with the illogicality of the rule, echoed by half a dozen musicians interviewed for this story.

For one, Pippy pointed out, the county already has strict rules against over-serving, which encompass the musicians performing at local bars. The regulation also didn’t ban performers from drinking in other parts of the venue. In fact, liquor board rules explicitly state that “band members may consume alcoholic beverages during a break at a table that is not on the stage or in the stage area.”

“We have bands like daMOOD or Silent Old Mtns who do a ritual shot before they play,” said Forrest Coleman, the general manager at Cafe Nola downtown. “So, it’s kind of weird when they’re setting up their gear onstage and then have to stand off to the side to take a shot, they all ‘cheers,’ and then they hop back on again.”

He’s seen other band members jump offstage, take a drink of beer at the bar, and run back to the performance. The regulation was even more nebulous in venues without a raised stage or platform.

“Then it’s like, well, how do you even define where the ‘stage area’ actually begins?” said Caleb Rose, a performer with the local band Dumb Valley.

He and several other musicians, including David Haynes from the band Jim Shorts and Zack Willis from the band Middle Kid, said they would like to see the liquor board go even further to modernize the county’s liquor laws. One of their biggest priorities is the establishment of a tavern license, a classification that would allow for venues serving only liquor. Right now, most license holders in Frederick — besides liquor stores — are required to maintain 28 tables and a certain ratio of food sales to serve alcohol. In some cases, that can make it harder for musicians to find a place to play, according to a recent story in the News-Post.

Is the county likely to approve a tavern license anytime soon? Probably not, said Pippy and Bussard, especially given most legislators’ historic resistance to the change. In the meantime, though, representatives from local bars like Champion and Guido’s will allow musicians to drink onstage as soon the regulation goes through a public hearing. If not sooner.

“I mean, they’re not enforcing it, right?” Percival said. “At this point, honestly, why not?”