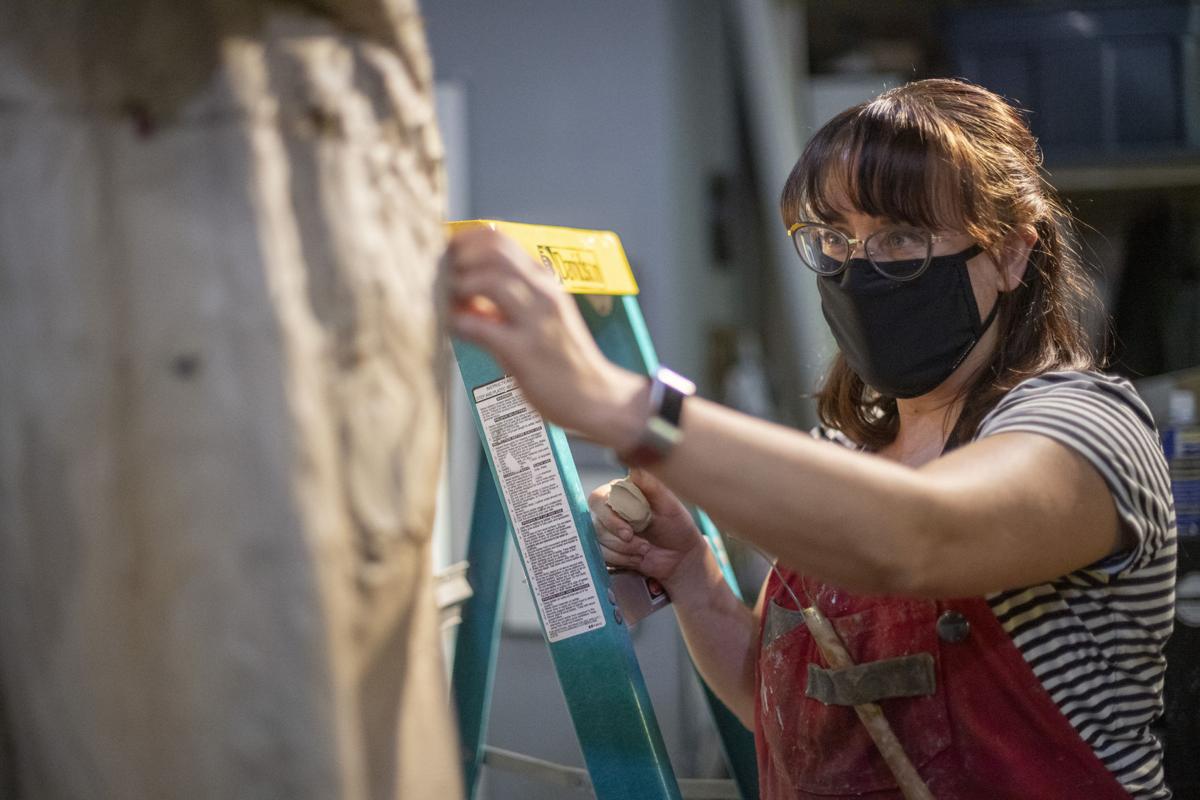 Sarah Hempel Irani is shown recently next to a masked self portrait in her West 5th Street studio in Frederick. 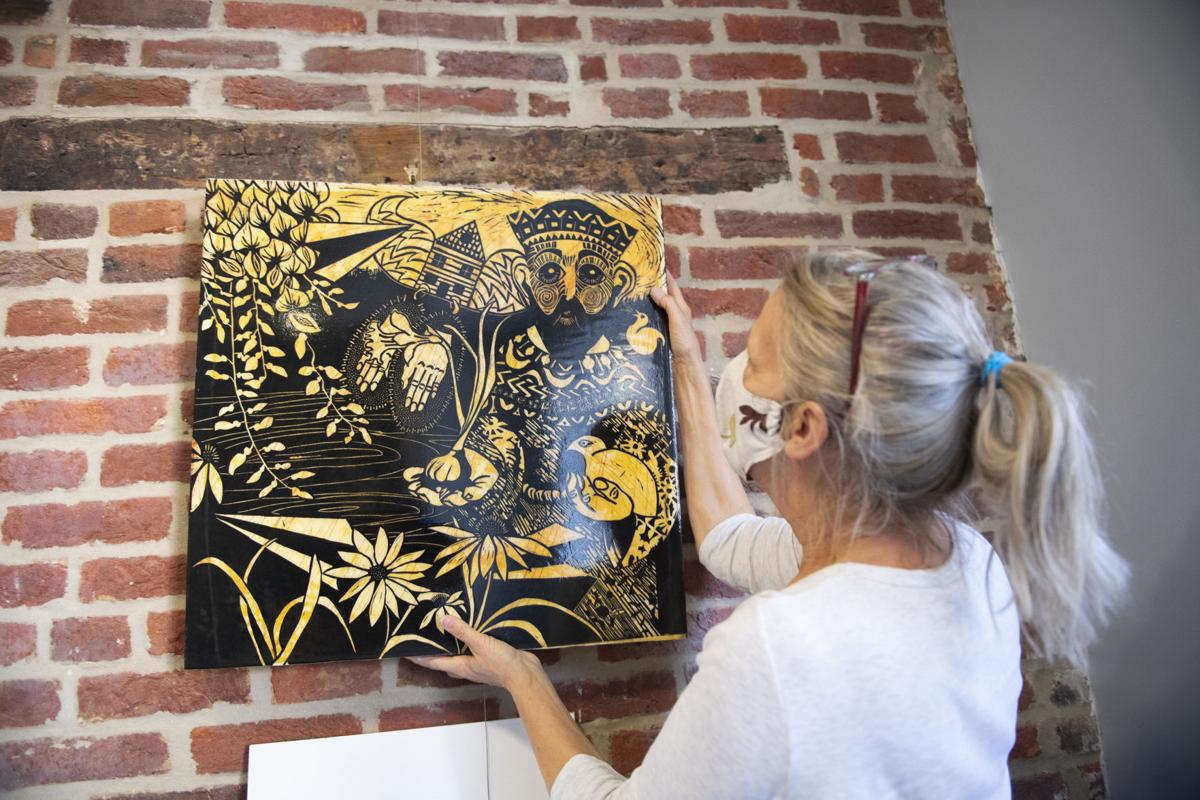 Jan McIntyre-Creager, a member-artist with The Artist's Gallery, hangs a piece by fellow member Rhonda Smith in a temporary space in November 2020. 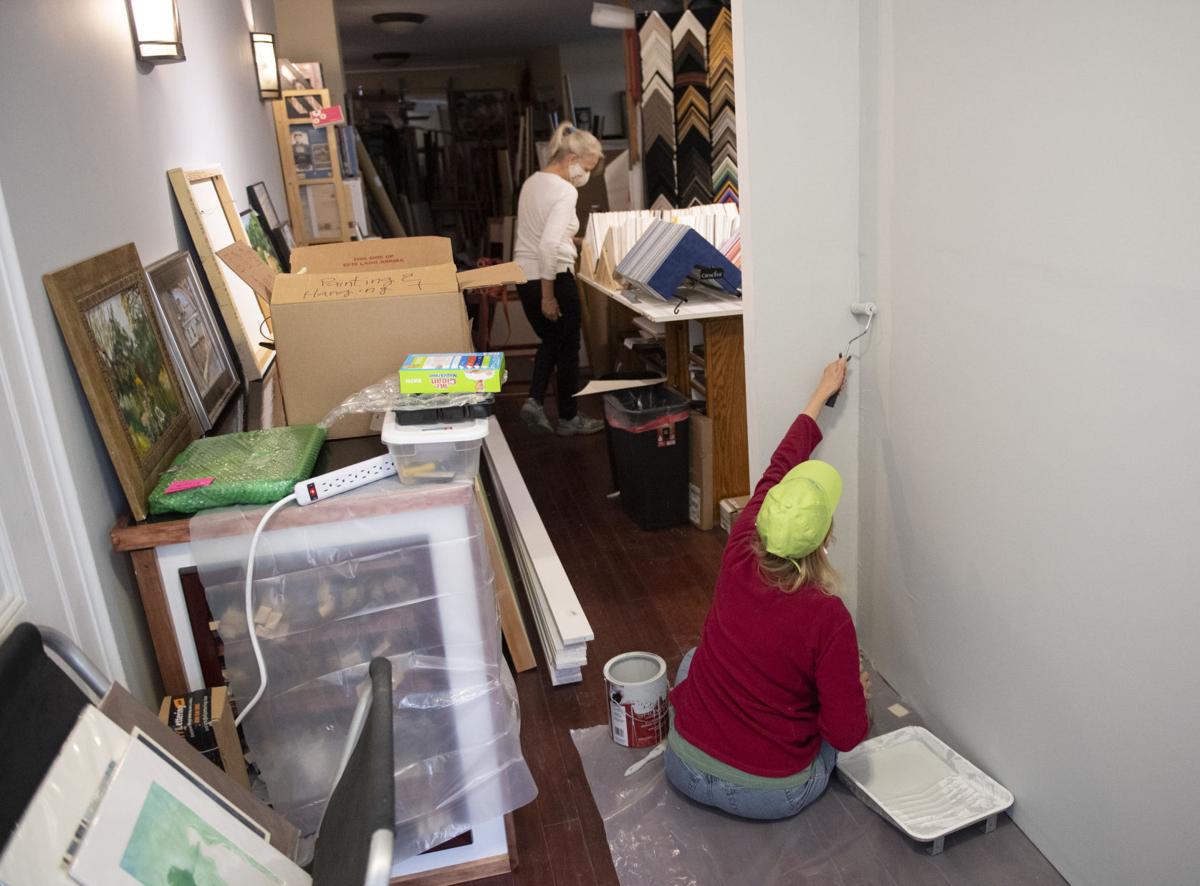 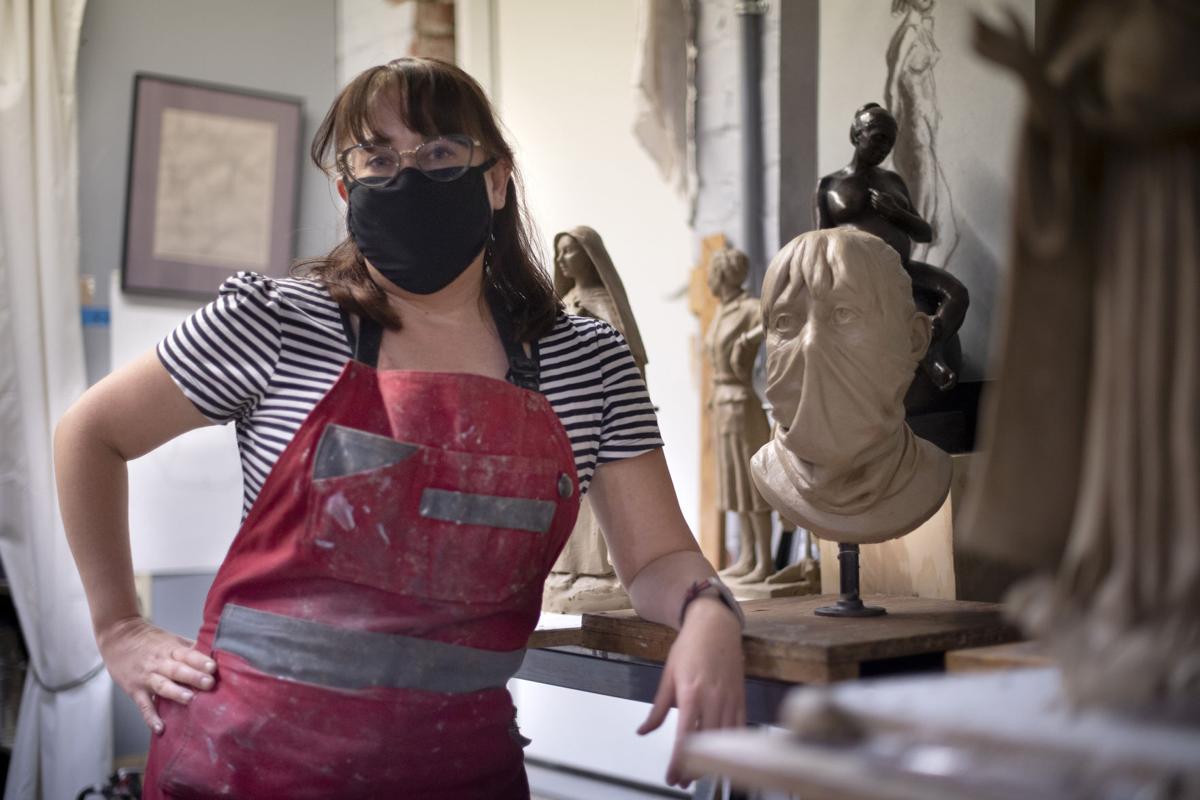 Sarah Hempel Irani is shown recently next to a masked self portrait in her West 5th Street studio in Frederick.

Jan McIntyre-Creager, a member-artist with The Artist's Gallery, hangs a piece by fellow member Rhonda Smith in a temporary space in November 2020.

When artist Caroline Mayer staffed the NOMA Gallery just as the coronavirus began to proliferate at the beginning of the pandemic she was able to get through her shift without any problem.

But when she got home she was exhausted, having not realized the toll her hypervigilance would take.

“I didn’t realize how emotionally exhausting it would be to worry about every little thing,” she said. “Everyone touching anything and breathing; it was difficult to get my head around.”

Mayer is a partner-artist at NOMA, a co-op on North Market Street in downtown Frederick that collects dues from member artists and relies on them to operate the gallery.

Galleries like NOMA — which serve as the main conduit through which many artists sell their original artwork — were thrust into an uncertain period, with the effects of an out-of-control virus putting many businesses in a financially uncertain position.

Almost nine months after Maryland Gov. Larry Hogan ordered non-essential businesses closed, and about six months after most galleries were able to reopen, the current state of the art scene is at a relatively strong, if precarious, juncture.

When it became clear that drastic action was needed to curb the spread of the virus as winter gave way to spring, members of TAG/The Artists Gallery, were closing in on signing a lease on a new space for co-op members to exhibit their work.

But amid the uncertainty presented by the pandemic, the group opted to not risk paying for a space that might sit vacant for months on end.

Instead they did what so many have had to do — they went virtual. Until this month, TAG had to make due with putting artwork online in lieu of a brick and mortar location.

Tom Semmes, a TAG member-artist, said recently that along with the issue of paying for a space that they conceivably couldn’t use, the group also worried their members might be uncomfortable staffing the gallery during a pandemic.

As other Frederick galleries began reopening to the public, it became apparent that the virtual art gallery model wasn’t working for TAG.

“It’s hard to imagine a gallery without, you know, wine and cheese, and a lot of people looking at art,” Semmes said. “It’s kind of a whole tradition.”

While a raging nationwide pandemic may prohibit the institution that is the cheese platter, the group at last has a place to call home; even if it does come with a roommate.

Upon being approached by a member of TAG about leasing space at his shop. Bill Stitley, the co-owner of Bravura Arts & Framing, offered the group the front room of his shop on North Market Street.

“Artwork needs to be seen. So the answer was, ‘yes,’” Stitley said. “You can have the best photographs of [artwork], and you can have the best video of things, but unless you can stand in front of it, get a true feeling for the size and the colors, you can’t fully appreciate it.”

Stitley added that he thinks the partnership with TAG will be mutually beneficial. While the frame shop gets a little help with their own operating costs, TAG members will avail themselves of the gallery-goers who already frequent the NOMA Gallery across the street.

“This seems to be a growing art area here, so we’d love to have a permanent space,” Semmes said.

On a recent afternoon, TAG member artists Jan McIntyre-Creager and Christine Stovall were at the group’s new space inside Bravura Arts & Framing, painting a newly installed wall in the middle of the room.

McIntyre-Creager said she’s seen a shift in her own work just as the pandemic has influenced a myriad of aspects of society.

Before the pandemic struck she had been working on a project that used birdcages as a metaphor for home and being confined — a juxtaposition between cozy feelings and being trapped or contained.

“And I use the house structures, the birdcage structures,” she said. “They’re a metaphor, basically, for the idea of not feeling at home.”

But then when COVID forced her people into a more isolated existence, the theme took on a more literal meaning.

“Instead of moving on to do something else ... I think I literally ended up saying, ‘well, maybe we should keep going with this,’” she said.

Rhonda Smith, professor emeritus and former chair of the Department of Contemporary Art and Theater at Shepherd University in Shepherdstown, West Virginia, said the coronavirus and the restrictions imposed as a result will undoubtedly influence the artwork produced. But she said that change may not be apparent until after the pandemic has abated.

“Artistically, I think that sometimes it’s not until after a [formative event] is over that people really thoroughly process what was happening or what was going on, or how it really impacted them,” Smith said.

While Smith, who is also a TAG member-artist, sees artists creating work that is very immediate in conveying what they’re currently feeling or even political messages, she believes we’ve yet to see where all this tumult is taking the art world.

“I think the other thing that will happen is that work that comes a little bit later might be more accurate, or more cerebral, or more encompassing of what the experience was really like,” she said.

There has been a visceral reaction to the current set of circumstances, she said, with artists creating self portraits with masks.

But when the art world moves beyond such literal reactions and toward a more nuanced expression is yet to be seen. As a matter of course, most artists were already producing work alone in their respective studios, so the isolation that has come to define this period isn’t the only influence.

Sculptor Sarah Hempel Irani, who is in the middle of creating a larger-than-life size sculpture of clothing designer and Frederick native Claire McCardell to be erected along Carroll Creek, has run into some challenges since the pandemic hit.

For one, she said a decision she and her husband made to homeschool their 13-year-old daughter curtailed the amount of time she can spend in her West 5th Street studio.

Hempel Irani ended up taking on an assistant to help prep materials and tools and keep the studio organized, which allows her to focus on the work.

But limited time isn’t the only obstacle. Not only did the bronze foundry she used close for good once the pandemic hit, but the live model she was using for the McCardell statue hasn’t been available.

Yet despite all the hurdles, she said she is still fielding requests to commission works, some of which she’s had to turn down.

The market for art persists

Jill Hossler, a member-artist at the Eastside Artists Gallery in Frederick, said that the two-year-old co-op gallery has seen strong sales since reopening.

She added that visitors seem to be spending more time looking at the work on display than they did pre-COVID.

“They’re looking at the art and letting it sort of envelop them and feel what … they take from the art and then you know, decide if that’s something they want in their daily environment,” she said. “And that’s what we all hope for, right? That someone will look at our work and feel something from it and decide that that feeling is something that they want to hang on to and keep with them.”

Bill Stitley, of Bravura Arts & Framing, echoed Hossler’s sentiment, saying his shop has recently had more work than any three or four month period since opening the shop seven years ago.

“It surprised me, and it’s surprised any number of framing institutions, framing people I’ve talked to throughout the industry. We’re having a little boom,” Stitley said. “The idea is that people are sitting at home, and they’re looking at their walls, and it’s like, ‘I’m really tired of that picture. Let’s get something or let’s reframe it to make it look new.’”

At nearby Gallery 322, sculptor Homer Yost said visitors had been starved for art during the shutdown.

“When we first reopened the gallery, we got a lot of comments that were, well, we’re so glad that you’re open again, we’ve been waiting for you to reopen,” he said.

Bill McLauchlan, who co-owns DISTRICT Arts with his wife, Staci McLauchlan, said their downtown contemporary gallery has been seeing stronger sales than before the pandemic. He said the gallery’s sales in October were 50 percent higher than the same period in 2019.

Caroline Mayer, a partner-artist at NOMA Gallery, another co-op fine art gallery in Frederick, ascribed the strength of the market for original artwork in part to some people having more disposable income because they’re eating out less or postponing expensive vacations.

And because there are fewer safe activities available during a pandemic, she said visiting an art gallery becomes an attractive option because visitors are able to space themselves out.

But with sales, it doesn’t hurt that people are slowing the pace of their daily lives and seeing art in a new light.

“Because you do become more contemplative if you allow yourself to just slow down and take things in,” Mayer said. “You’ve made time to think about things and analyze things a little bit; sort of see how you feel about things instead of just [saying], ‘that’s a flower. OK.’”