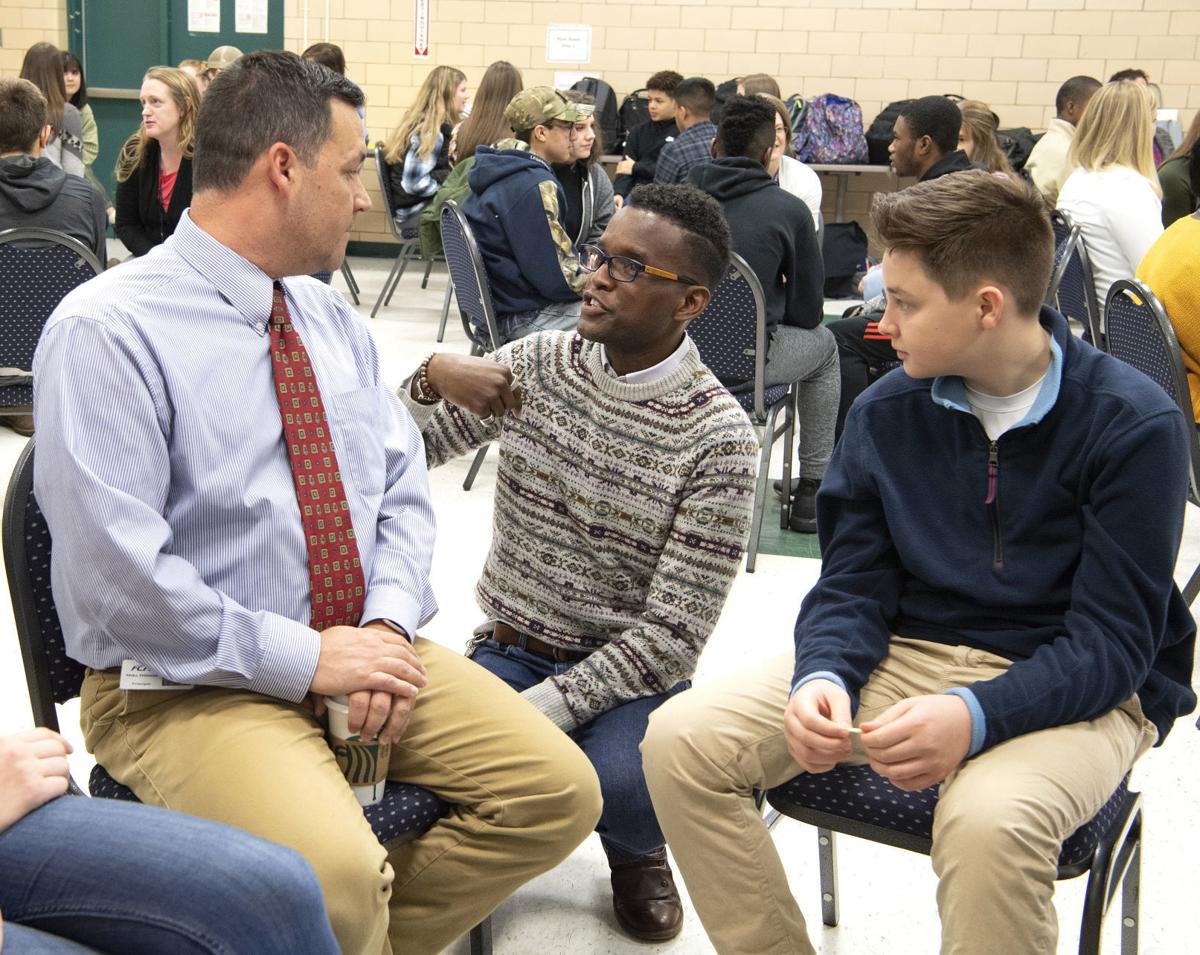 Walking into the Frederick County Public Schools staff development center, about 170 students gather in a large conference hall on a recent Thursday afternoon.

They’re placed in small groups, sitting in circles with fellow students from other schools, most of whom they’ve never met. Their book bags are placed in the corners of the room along with their cell phones. There will be no electronic disruptions this morning.

After a brief introduction from FCPS staff, the students go around in their circles and explain something unique about their name.

This is the beginning of a joint day of the Student Voices program within FCPS. The program exposes students to the varying perspectives and school cultures throughout the county, along with allowing students to feel heard by central office and school staff.

I covered education for this newspaper for about a year, including the national school walkouts to protest gun violence. Since then, I’ve observed school systems and students from afar, watching as some have made their voices heard on some of the most important issues facing our society. But many others fade into the background, as Emily Webb, a Linganore senior, said.

“I feel like students do have a voice and staff does listen, but I also think there’s a lot of students in our school who don’t feel like they can speak up,” Webb said. ”They don’t feel empowered to share their voice. And that’s what makes a program like this so great. “

Headed by Eric Louérs-Phillips, the supervisor of accelerating achievement and equity, and Colleen Bernard, the secondary curriculum specialist for the system, the program allows students to share perspectives of their schools, break down stereotypes and effectively learn to communicate how they feel.

The program came to be in part from a student recommendation to Superintendent Terry Alban. Students wished they had more opportunities to interact with their peers from other schools. It was modeled in the same vain as a similar program in Howard County.

It starts with central office and school staff members visiting a specific school for an entire day and interacting with the students in the program. They do exercises to identify stereotypes, positive and negative, about their school and seek out ways to change those stereotypes. They do an exercise called a “diversity walk,” where students will learn about each other’s experiences and see the similarities and differences in one another.

The exact conversations are largely private — the group sets guidelines early in the day, which includes a “Vegas rule.” What happens in Vegas stays in Vegas. But broadly, they examine their school culture.

After the school days, the system holds a joint day that includes all of the kids from each school participating in the program. The experience culminates in an opportunity to shadow or host someone in the program to learn about their school culture and see how students interact with one another.

“The basis of any democracy is predicated on the education of its students,” Bernard said. “If we want students to be civically engaged adults we need to treat them as civically engaged students. We need to value what they’re telling us.”

Webb hopes the shadowing experiences will lead to lifetime friendships.

Keola Evans, a sophomore at Catoctin High School, will shadow a school next month — an opportunity at which she jumped.

Growing up in school, I heard so many adults tell me they wish they had the opportunities in school that I did. As I get older, I find myself saying that same phrase to students currently in school. This program would have done wonders for me, because students learn early on how important someone listening to you can be.

After all, I am where I am in no small part because my high school principal, David Kehne, spent part of his day listening to me.

A teen finds his voice

Walking up to the staff development center that recent Thursday afternoon, David Kehne, the current principal of Urbana High School, greeted me by saying hello.

About 10 years ago, David Kehne was the principal at Walkersville High School. And I was a senior there — and one of the students to whom Webb referred, who never felt empowered to speak up, or that I had a voice, or that anyone would care about what I had to say.

Until I met Principal Kehne.

As a high school student I had little to no interaction with my principal. But while taking the journalism class offered at our school, at the urging of my classmates, I wrote a column titled “Walkersville High School: the no fun zone.”

The column took staff and administration at the school to task for what I, and many other students, deemed to be unjust rules that stifled school spirit, fun for students, and quite frankly, just didn’t make sense to us. This was the first time, I’d ever felt like I could speak up in my school. And it landed me in the principal’s office before the column even ran. My journalism teacher had some concerns that I was making our school look bad.

But Principal Kehne wasn’t worried about that. He wanted to listen to me. He asked only that I talk with him and include his perspective about why the school did things the way they did. He thanked me for making my points. He called me a “thinker” and told me he was excited about where my critical thinking would take me.

It was the first time I ever truly felt heard as a student. And it encouraged me to pursue journalism as a career, because I saw that my words could actually make a difference. Or at least start a conversation.

Looking back, I feel a little lame to have used that platform to complain about things like why the school wouldn’t allow us to use an open-flame grill to make food while tailgating in the school parking lot before football games.

There are so many other issues I could have been passionate about. Today, our students are dealing with a mental health crisis. There’s a growing number of students experiencing homelessness or growing up in poverty. Bullying is perhaps worse than ever, and social media is just an absolute nightmare of a thing to put in front of kids.

Students like me would have benefitted from a program like Student Voices. Maybe I would have felt empowered earlier in my school career. I could have seen what other students dealt with and experienced. Perhaps columns could have been written to speak up for them.

But this program will benefit these students long after they finish school. The school system is building students to be productive members of society once they leave — and that should be a school system’s fundamental purpose.

“We need to do a better job listening to these kids,” Louers-Phillips said.

Our young people are our future. And we’re shaping the world in which they will live. Listening to them would give us a guide to build a world they are capable of thriving in.

But perhaps more importantly, it’s hard to overstate how much listening to these kids does or will eventually mean.