A local state delegate has not given up the fight in arguing that Gov. Larry Hogan’s (R) executive orders are overreaching of the Maryland and U.S. Constitutions.

Del. Dan Cox (R-Frederick and Carroll) wrote in a Facebook post earlier this week he and over a dozen other plaintiffs would be filing an appeal for a temporary restraining order to the United States Court of Appeals for the Fourth Circuit, which serves Maryland and four other nearby states.

Cox called on Hogan to lift restrictions on businesses, end the requirement for face coverings in businesses and end the ban on gatherings of more than 10 people, among other parts of the orders.

“The Governor can Make Maryland Great Again like the vast majority of States that have now reopened and the eight which never closed nor trampled on the Bill of Rights,” Cox wrote, playing on a common slogan used by President Donald Trump, Make America Great Again. He could not be reached via a phone call or text Thursday.

Cox — who is joined by Dels. Neil Parrot (R-Washington) and Warren Miller (R-Carroll and Howard), several religious leaders and Adventure Park USA and several others in his filing — also recently filed a response to U.S. District Judge Catherine Blake ruling against his request for an temporary injunction on Hogan’s orders.

In that response, Cox cites multiple news articles indicating that other states have started to reopen, and also noted Maryland’s economic shutdown is negatively impacting many residents’ lives.

“Governor Hogan has no authority under the Constitution or any statute to order all healthy Marylanders to remain at home under a lock-down, unable to leave except for reasons he deems necessary. Marylanders are right to oppose this tyranny, unheard of in American history,” the response reads at one point. 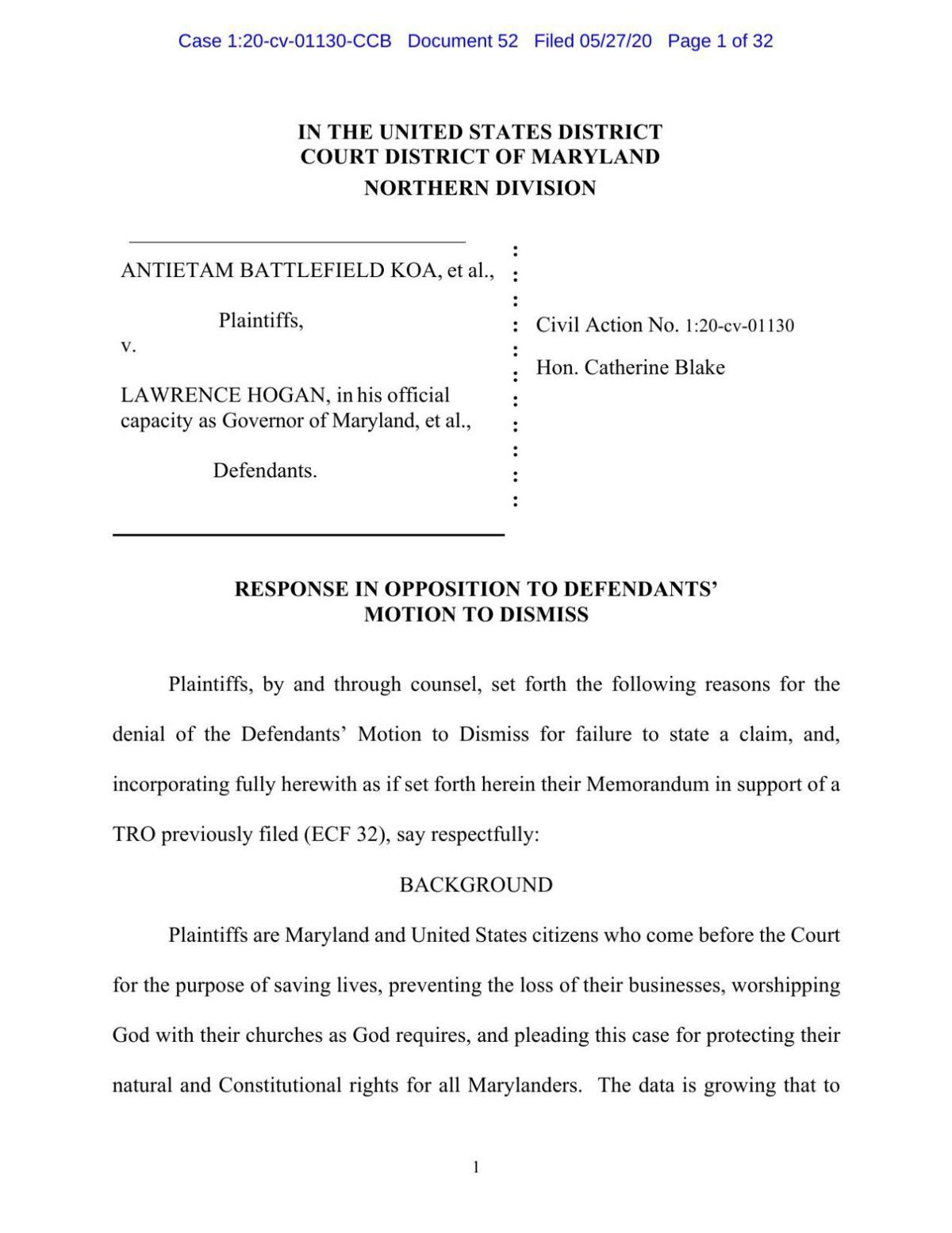 Mike Ricci, a spokesman for the governor, offered a simple response via email when asked whether the governor’s office felt confident Blake’s ruling would stand in the Fourth Circuit.

Incoming and outgoing County Attorneys Bryon Black and John Mathias teamed up in the latter’s final appearance before the County Council this week.

The Frederick County Conservative Club had previously been attempting to gain 10,000 signatures from county residents to get a question on the ballot asking whether to return Frederick County from a charter form of government to a commissioner form.

The club suspended that effort in March, and its president, Fred Propheter, said Thursday the club would no longer be attempting to obtain the 10,000 signatures for this year’s election. The club had gathered roughly 1,800 signatures by around early March, Propheter added.

A federal judge struck down a lawsuit from Del. Dan Cox and several others Wednesday which sought to challenge the stay-at-home order and regu…

Antietam Battlefield KOA??? Really??? Even a smart politician wouldn't produce such a backing name for a frivolous lawsuit. As a conservative republican, I am in NO way behind Del. Cox nor his moronic political cronies. They are a THREAT to the health, safety and well-being of citizens ... VOTING American citizens.

How many more comments are going to be posted before one of his supporters pops up like a whack-a-mole and tries to defend him here?

The way this is going, if he were up for re-election in November, betting odds probably would be 1:1 that the over/under on his vote tally would be less than three dozen. By 2022, he may get less than 10.

I seriously think I am gonna offer up my poodle as a MD delegate candidate in his district in 2022. Odds she would get more votes than Cox would probably start at 3/5 at the moment.

Well this is awkward...

Gov. Hogan is done due to term limits. He has been great, however, what does he care what happens? Politics.

Cox is an incompetent lawyer and a disaster as a state official. What is he doing to make the state unemployment system work? Probably nothing and that might be helpful.

No shirt no shoes no mask no service. Weather its set by the government or not. Business owners can set the rules in here own establishments. I would like Mr Cox to go to NYC and walk around with no mask and see what happens.

birdie is correct ... it's a legal right for Maryland business owners. In fact, a business owner or their rep can refuse service or even trespass you from the business place. Fact.

Cox is not convinced that he looks like a idiot and needs a higher authority to tell him.

Republican on Republican fratricide. Once the Democratic tsunami hits in November, the Republican party will be a shell of its former self. In deep blue Maryland, it is hilarious to me to see a Republican attacking another Republican so publically. Reminds me of a schoolchild putting tacks in a classmates seat to try to get a reaction.

And religous folks parties to this lawsuit? And an amusement park? Yes, the Lord does work in mysterious ways! Ha!

Happy...the republicans haven' been true to themselves in decades. Ever since Trickle--down "voodoo" economics was presented as the holy grail of funneling wealth from everybody else to the wealthy, their greed has outpaced their morals by a country mile. They still feign religious piety to placate those who follow them on that bases, pander to the racist right to keep them hanging on even though it's detrimental to their own financials, pander to businesses thinking they will be the beneficiaries of that trickle-down only to see they won't ever get a dime..and won't realize until too late like now, continue to pander to the misogynists who never think women should be equal but keep some women by pandering anti-abortion schlock that overrides every other moral value by raising the bar of self-piety and better-than-thou-ism saying anyone who wants one is even or not moral like they are, and are bashing media and passing asinine executive orders to halt free speech of anyone who wants to speak about this in rational terms, and are led by the chief of all liars who distracts them with unintelligible banter and ever-changing stories that make it so they can't really figure out what is what, and who has surrounded him with yes-men and fired anyone who has insight and ability to out him for what he is (think IG firings). Then their are the followers who, like trump, bash anyone who opposes their opinions, bash anyone who possesses better or more knowledge of science and call it hoaxes, conspiracies or that the person (scientist, politician, media POC, other) who said it is somehow less qualified than they are. Media itself is bashed, while a specific network is propped up as the gold standard of lies/propaganda passing as "news" to our POSPOTUS and his press secretary (all of them to-date included) flat out lie and say trump doesn't lie either. I'd venture a guess that the majority of trump supporters also think that the south won the Civil War. Why else would they be waiving confederate flags all over the place? Many of Trump followers also waive the swastika. I can't recall a liberal or democrat waiving either of those flags...maybe a confederate flag when they were young and didn't understand its history...but none once made aware.

So...yes...fratricide...implosion...it will all come to call in November.

All I can say is, WOW. Very thorough and in-depth analysis you have presented. Many good observations made.

I cannot help but feel sorry for all of Cox's constituents. They are stuck with him for two more years. When the legislators return to Annapolis, there will be no social distancing concerns with Cox. All Democrats in the statehouse will stand 50 feet away. All his fellow Republicans will want to distance themselves by at least 25 feet. He and his constituents might as well be on an island. And Trump will probably call, demanding Cox return his motto, lest he get sued. By none other than Sekulow, probably.

But he has his clergy, amusement park, KOA and military retiree co-complaintants to fall back on, eh?

Sekulow was a mentor to Cox, apparently.

Well, Sekulow made a fool of himself in front of the US Supreme Court a few weeks ago. Just goes to show like-minded folks run around in the same circles just running in circles.

Dan Cox is wasting yet more of our tax dollars chasing his tail in an effort to gain attention from the Trump camp. Even going so far as adopting Trump's stupid MAGA slogan. Maryland is already great, if Dan Cox doesn't think so he's free to leave.

You heard it hear first folks...

Appeal will be denied.

No more shiny toys to play with, now that Governor Hogan is thoughtfully and safely starting to open things up this week.

And, for all of Cox's constituents, this early information did not cost you a nickle. You can thank me later, after you tally up how much of your taxpayer dollars are being wasted on this ridiculousness.

This constituent did not vote for him, and I've been criticizing and sparring with him online ever since he was elected in 2018. For a long time, I've felt I've been the only one. It's nice to have company now. Unfortunately, the coward is blocking those with whom he disagrees on his Delegate Dan Cox facebook page.