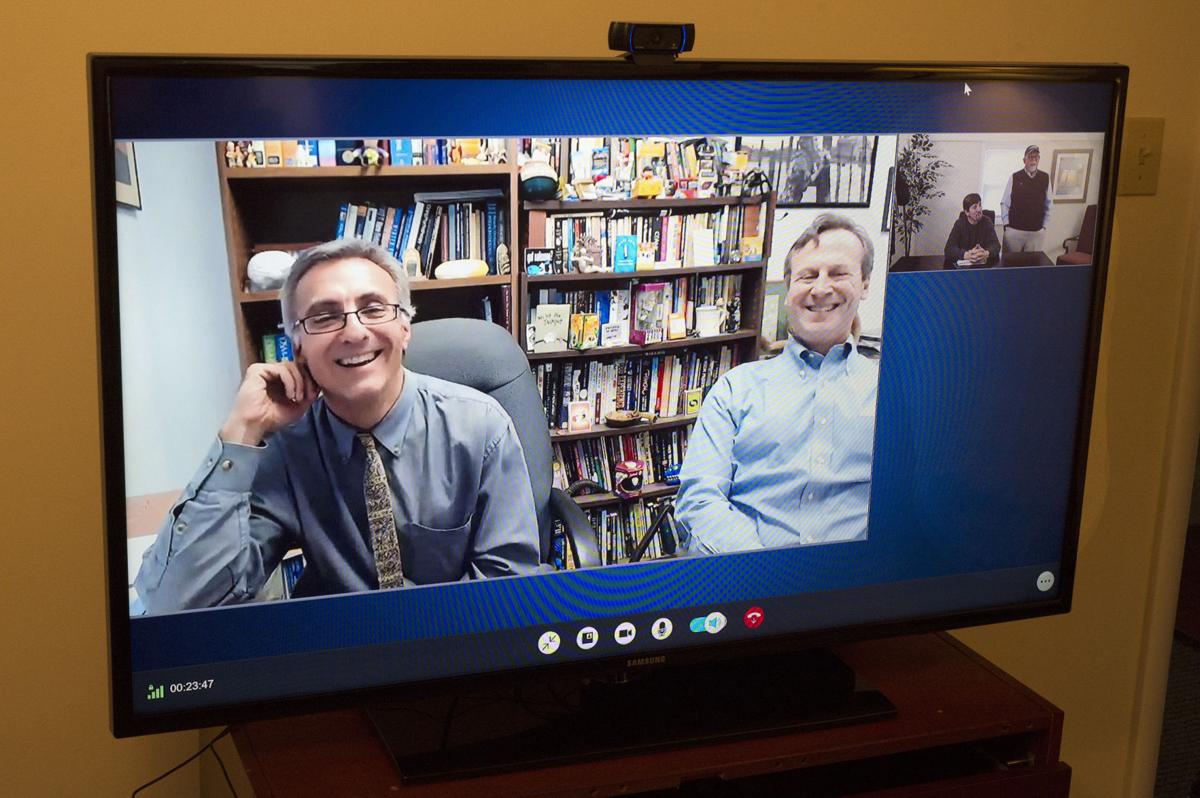 Eric Weintraub and Christopher Welsh, both with University of Maryland Medical Center, talk with a reporter at the Wells House @ Gale Recovery in Frederick on Nov. 9 using the Telemed system. 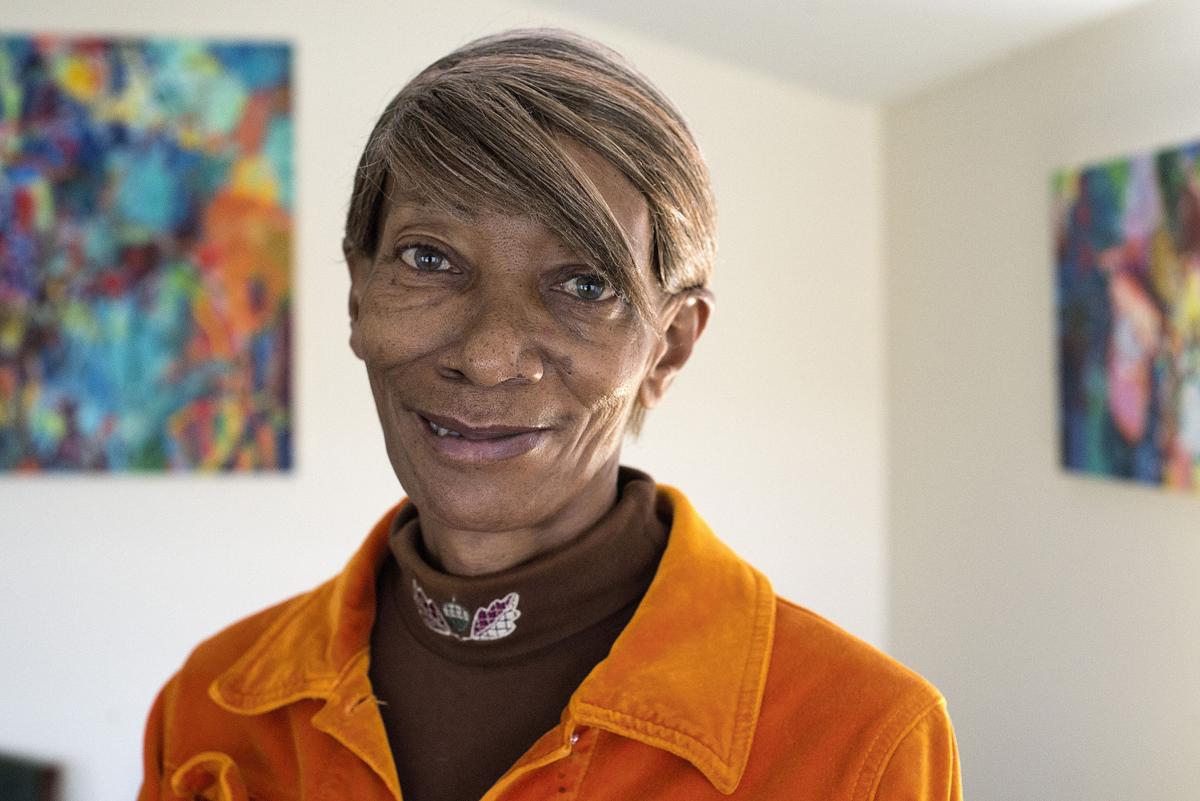 Cassandra Key is a patient at the Wells House @ Gale Recovery in Frederick.

Eric Weintraub and Christopher Welsh, both with University of Maryland Medical Center, talk with a reporter at the Wells House @ Gale Recovery in Frederick on Nov. 9 using the Telemed system.

Cassandra Key is a patient at the Wells House @ Gale Recovery in Frederick.

That’s the day when Key, a heroin addict, enrolled in the Wells House @ Gale Recovery residential drug treatment program. As part of her recovery, which includes counseling and support groups, she takes Suboxone, a prescription medication used to treat opioid addictions.

Like any patient on a prescription medication, she meets with her doctor on a regular basis. He asks questions to determine if the dosage is correct, or if she’s suffering any side effects.

But her visits aren’t in a doctor’s office. The biweekly appointments take place in a small, second floor room at Wells House’s new office on East Patrick Street.

Instead of a face-to-face conversation, she speaks with her psychiatrist through a TV screen, a secure video connection between Frederick and the University of Maryland University Health Center in Baltimore, where her doctor works.

Key admitted that the concept of a virtual appointment took some getting used to.

But there are benefits. For example, she never has to leave a message with someone else and hope her concerns are relayed to a doctor.

The alternative might be not seeing a doctor, and not getting the medication she needs, at all.

The supply and availability of physicians certified and willing to prescribe Suboxone and other similar addiction-treatment drugs haven’t kept pace with the explosion of heroin use, especially in more rural areas like Western Maryland, according to Charlie Mooneyhan, the executive director of Wells House.

The number of drug and alcohol-related deaths in Maryland from January through June was 920, according to preliminary estimates published by the Maryland Department of Health and Mental Hygiene. That figure — which includes deaths related to ingestion or exposure to alcohol, heroin, cocaine, and other prescription and non-prescription drugs — is more than 50 percent higher than the 601 deaths in that same time period in 2015, according to the data.

In Frederick County, there were 33 drug and alcohol-related deaths from January to June 2016, compared to 18 in the same time in 2015, according to department estimates.

The Telemed program, the first of its kind in Maryland, seeks to bridge the gap by connecting patients like Key with doctors who are far away geographically, but can treat them.

That’s 150 patients who might otherwise be without medication for months. That’s 150 patients in the throes of withdrawal, struggling to overcome addiction without the assistance of opioid-blockers like Suboxone and other buprenorphine drugs. Mooneyhan said he had some patients on waiting lists for as long as eight weeks, awaiting an opening in the schedule of one of the limited number of doctors who can treat them.

Physicians who wish to treat opioid-addicted patients with buprenorphine must complete a certification class administered by the American Psychiatric Association. Those certified to prescribe buprenorphine may only prescribe it to 100 patients at a time.

Many who went through training may opt not to prescribe, according to Dr. Christopher Welsh, medical director of the University of Maryland Medical Center Substance Abuse Consultation Service.

Other physicians certified to prescribe buprenorphine may choose to treat a handful of patients, far fewer than the 100 maximum, Welsh said.

Many also only take cash, and don’t accept Medicaid, according to Welsh. For patients treated at Wells House, cash payments may not be an option, Mooneyhan said.

“Most of the people we get are at rock bottom,” he said. “They don’t have that kind of money, and they’ve burned bridges with everyone in their life who might be able to help them.”

According to the Substance Abuse and Mental Health Services Administration, 45 physicians in Maryland are working at capacity with 100 patients on buprenorphine.

Certified physicians can choose not to be part of the Substance Abuse and Mental Health Services Administration’s public list. There are about 15 Frederick County physicians on the public list.

Dr. Gene Ashe, who runs a family practice in Woodsboro, is not on the list. He is certified to prescribe buprenorphine and has been working at capacity with about 100 opioid-addicted patients.

“There is a much greater demand than just the 100, and, of course, there are other Suboxone prescribers in Frederick, but there is a great need for more [certified physicians],” he said.

Sarah Drennan, a clinical treatment services manager at the Frederick County Health Department, said people often contact the department for help with connecting to doctors and other treatment resources for opioid addiction.

“Locally, there is certainly a need for more medication-assisted treatment, especially for those providers who are able to bill Medical Assistance,” she wrote in an email.

In the absence of doctors geographically close to the patients that need them, there’s Telemed. Although the pilot program is still in its infancy, initial observations and feedback has shown it to be successful, Smith said.

Wells House initially offered Telemed exclusively out of its Hagerstown location. Participants in the Frederick location could participate in the program, but had to travel to Hagerstown for biweekly appointments.

The new Frederick office was outfitted with the technology and equipment in November.

With two sites for patients to consult remotely with psychiatrists, organization leaders hope to increase the number of participants to also include some enrolled in its outpatient services, Mooneyhan said.

Each location features a small, private room with a flat-screen TV for patients to use during visits. Costs include the price of the TV plus the electronic conference call software, equal to about $1,000 according to Nathaniel Peacock, Wells House’s information technology director.

The doctors charge an hourly rate — about $250 per hour — which Wells House pays as part of its treatment program.

An encrypted electronic “tunnel” — isolated from the rest of each building’s Wi-Fi connection to ensure privacy — connects the user to a virtual conference room. Welsh and Weintraub can join the conference room from their own connections.

The Frederick News-Post used the system to interview Welsh and Weintraub for this story. The connection stalled a few times, a common troubleshooting problem, but one that can be quickly resolved, Peacock said.

Most appointments last 20 to 30 minutes, consisting of a conversation about how patients are feeling and a review of their latest urine and toxicology results.

Electronic copies of patients’ medical information, including results from urine sample and toxicology screenings, are stored both at Wells House and with the University of Maryland Medical Center. The latest test results are sent to physicians before their appointments with that patient.

Doctors can access notes from patients’ counselors and therapists about their behavior during other programs.

“Our primary goal is to follow up with patients on the medication and make sure it’s doing what it’s intended to do,” Welsh said.

He will ask how a patient is feeling, and if she or he has noticed side effects from the medication. He might adjust the dosage, depending on the response.

For those interested in weaning off their medications, Welsh and Weintraub will talk about the risks and benefits. But they advise against stopping the use of buprenorphine drugs like Suboxone “cold turkey.”

Welsh and Weintraub don’t just provide medical expertise in biweekly visits. They go “above and beyond,” according to Smith — giving out cellphone numbers for emergencies, and sometimes referring patients from their clinic to the residential treatment program.

“There are so many people who can say there’s a problem, but there’s few people who actually do something about it,” Smith said. “It’s laudible, what they’re doing.”

Physicians who have been prescribing buprenorphine to 100 patients for at least a year now can apply to raise their patient limit to 275, under new federal guidelines.

Ashe said his office is looking into taking up to 175 additional buprenorphine patients, but more physicians should look into getting certified.

“I’ve been trying to get some of the other doctors in my group to get certified. And for some, it’s a preference of what conditions doctors want to treat,” he said. “To me, it’s rewarding, and something I enjoy doing, but not every doctor has that preference.”

In those cases, the Telemed program may be an alternative solution. Mooneyhan recently spoke at a statewide event about the program, intending to share the information for other counties to use as a model.

Weintraub and Welsh have discussed launching a similar program in Garrett County with the county health department there.

“Our ultimate goal is to increase the number of doctors that are doing this,” Weintraub said. “For all these patients ... we want a way for them to be seen.”

Though in its infancy, the program appears to be working. Welsh cited longer stays for treatment participants and fewer relapses as proof of the success he’s seen among his patients.

Peacock will track these and other data sets to quantify how and if the new program works. The analysis will include how many graduates of the treatment programs stay clean after leaving.

As for Key, she’s on her second round of rehabilitation, and hoping this one sticks. She’s set to graduate from the program in January, she said in a phone interview Tuesday.

“So far, things have been really good,” she said.

Naltrexone, also known by its brand name Vivitrol, is administered via injection. The drug is intended to block the effects of an opioid high and can help prevent relapse.

Suboxone contains buprenorphine, which is an opioid, and naloxone, which blocks an opioid high. Since the medication contains opiates, it can become addictive or abused if not used as prescribed. Suboxone is administered in pill form or in a thin film placed under the tongue or inside the cheek.

Suboxone is used to wean opioid-addicted patients off their addiction.

Naloxone is also known by its brand name, Narcan, which first responders use to treat patients who have recently overdosed on opioids.

I didn't realize that addiction to doctors was that big a thing (headline).