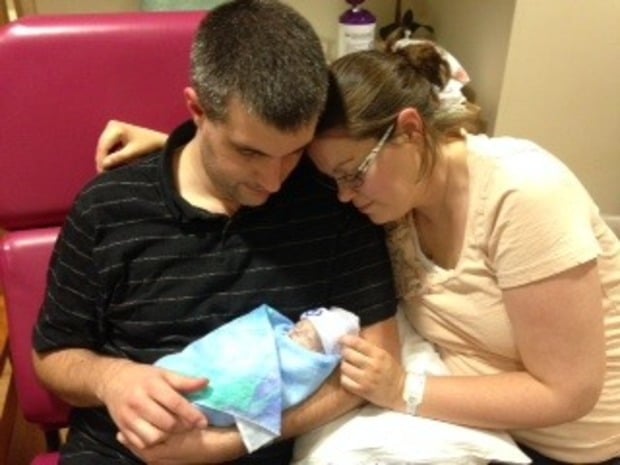 Courtesy photos Jason and Hilliary Googash hold their son, Alexander, who was born after only 25 weeks of pregnancy. Here they are saying goodbye to their son, who lived for six weeks after his birth in the neonatal unit at Shady Grove Hospital. 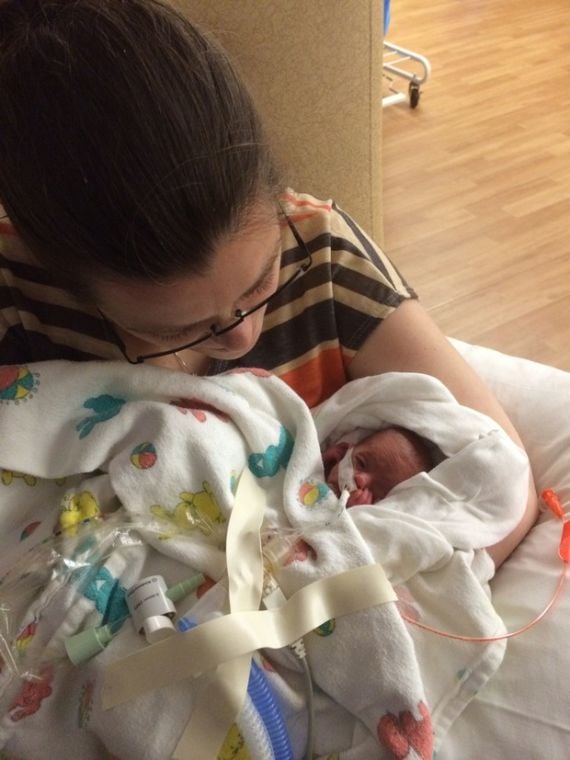 Hilliary Googash holds her son, Alexander, for the first time. Alexander was born premature, and only survived to 6 weeks of age. The Googashes are raising money for a nonprofit that raises money for neonatal research.

Courtesy photos Jason and Hilliary Googash hold their son, Alexander, who was born after only 25 weeks of pregnancy. Here they are saying goodbye to their son, who lived for six weeks after his birth in the neonatal unit at Shady Grove Hospital.

Hilliary Googash holds her son, Alexander, for the first time. Alexander was born premature, and only survived to 6 weeks of age. The Googashes are raising money for a nonprofit that raises money for neonatal research.

It was a name fit for a king: Alexander Clark-James Googash.  And he was a feisty baby, said Hilliary and Jason Googash, his parents. He came out of the womb kicking, and fighting is how he went. On June 11 of this year, King Alexander died in surgery at Shady Grove Hospital. He was 6 weeks old.

In the aftermath of loss, their Frederick townhouse is quiet. A rainbow stack of envelopes sits on the kitchen table next to Hilliary’s computer, where she keeps an archive of the more than 300 photos she took of their son.

“I’m a doer,” she said, sitting in the kitchen. Jason stared at the table. “I needed something that we could, I don’t know, make this whole thing have some sort of positive outcome.”

The “something” was fundraising for the Little Giraffe Foundation. It was plans for a hat and blanket drive for the Shady Grove Neonatal Intensive Care Unit that didn’t quite work out. It was a Zumbathon. Something has a variety of meanings.

Six years ago, the Googashs risked everything, leaving Ohio for Frederick. Both Hilliary and Jason quickly found jobs, she at Twin Ridge Elementary School and he at MITC software.

Getting pregnant was only half the battle. At 20 weeks, Hilliary developed preeclampsia, or high blood pressure and excessive protein in the urine, sending her to the hospital.

Alexander was born at 25 weeks — more than three months early. Extremely premature babies are at risk of a long list of complications, said Dr. Cynthia Bearer, professor of neonatology at the University of Maryland Medical School. At that age, the central nervous system isn’t fully formed and everything from eyesight to digestion, even the brain, is at risk of failure, infection and scarring.

Alexander lived his life in an incubator. He gripped Hilliary and Jason’s fingers with his hands and toes, like a tiny pink monkey wrapped in blankets and wires. At 1 pound, 4 ounces, he was impossibly small. The nurses decorated hats for him and sometimes, the beanies with “Rockstar” or the Superman logo (with an A instead of an S, of course) were all you could see among the medical equipment.

“It’s such a small, everyday thing that people take for granted, but we got to change his diaper,” Hilliary said. “It was an opportunity to participate in his care and be a mother.”

Breathing was a problem, Jason said. Daily, Alexander’s blood oxygen concentration plunged into single digits. There was a hole in the major vessel directing blood away from the lungs and it wouldn’t close.

“If we didn’t try the surgery, he was just going to stop breathing,” Jason said.

Once again, they risked it all. But this time, doing something wasn’t enough. The jungle animal-themed nursery was to remain empty, a palace without a king.

Hilliary discovered The Little Giraffe Foundation. The Chicago-based nonprofit is the work of the Santoro family and benefits neonatal research and families in NICUs. Amanda Santoro gave birth to twins 25 weeks into her pregnancy, and by 6 weeks of age, only one survived.

Santoro said the foundation received a Facebook message from Hilliary’s sister about a Frederick couple who were raising money for them through youcaring.com — $5,000 worth of funding. In the week that Hilliary and Jason set up the account, they exceeded their goal, with more than $7,500 raised as of this story’s publication.

“This was really unprecedented for our organization,” Santoro said. “The gesture and the energy and generosity they have shown us is nothing short of unbelievable.”

The funding will allow them to fund at least one more research grant, Santoro said, and she and her husband will meet the Googashs in October. They’ll donate books and toys to Shady Grove this fall, motivated by Hilliary’s only regret — that she didn’t read to Alexander.

Hilliary is also organizing a Zumbathon, set for Aug. 23.

But behind the somethings, a family still grieves. The palace is still empty. They will hold a memorial service for Alexander at Hilliary’s family’s farm and continue thanking those who have been so kind.

“The sadness is always there,” Jason said. “It hasn’t gone away and I don’t think it will go away for awhile.”

Donations can be made at http://www.youcaring.com/other/alexander-king-of-the-nicu/191008

The Zumbathon will be at Urbana Middle School on Aug. 23 from 11 a.m. to 1 p.m.  Tickets are $15. Information will be available on the youcaring site or email kingalexander430@yahoo.com.