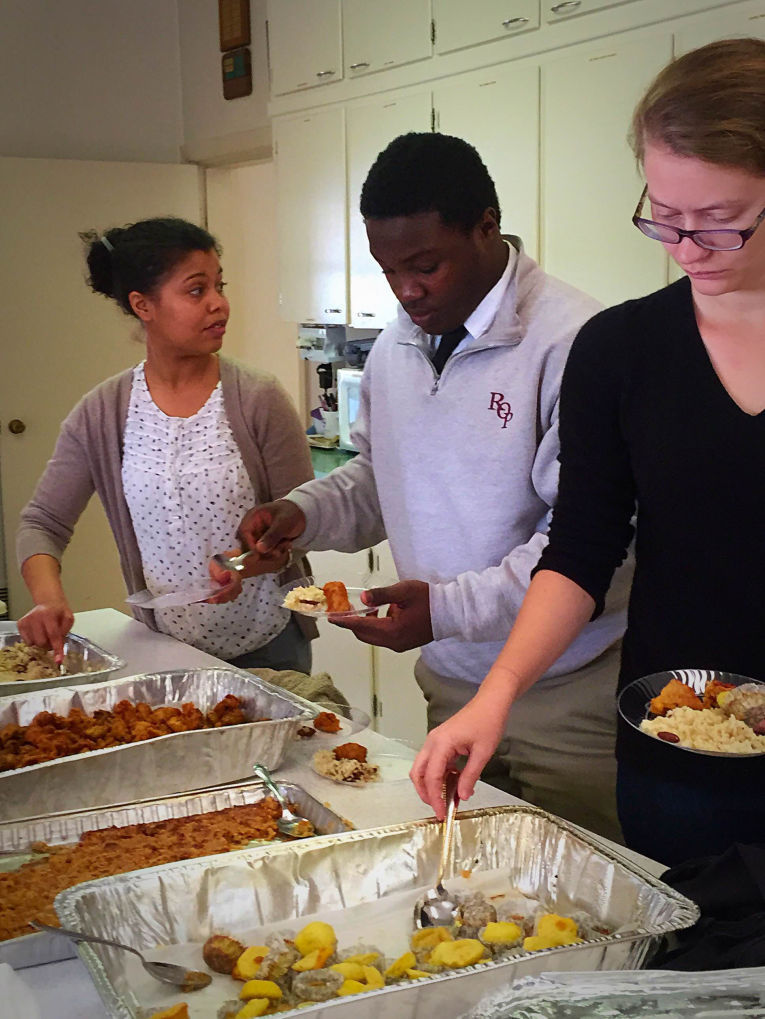 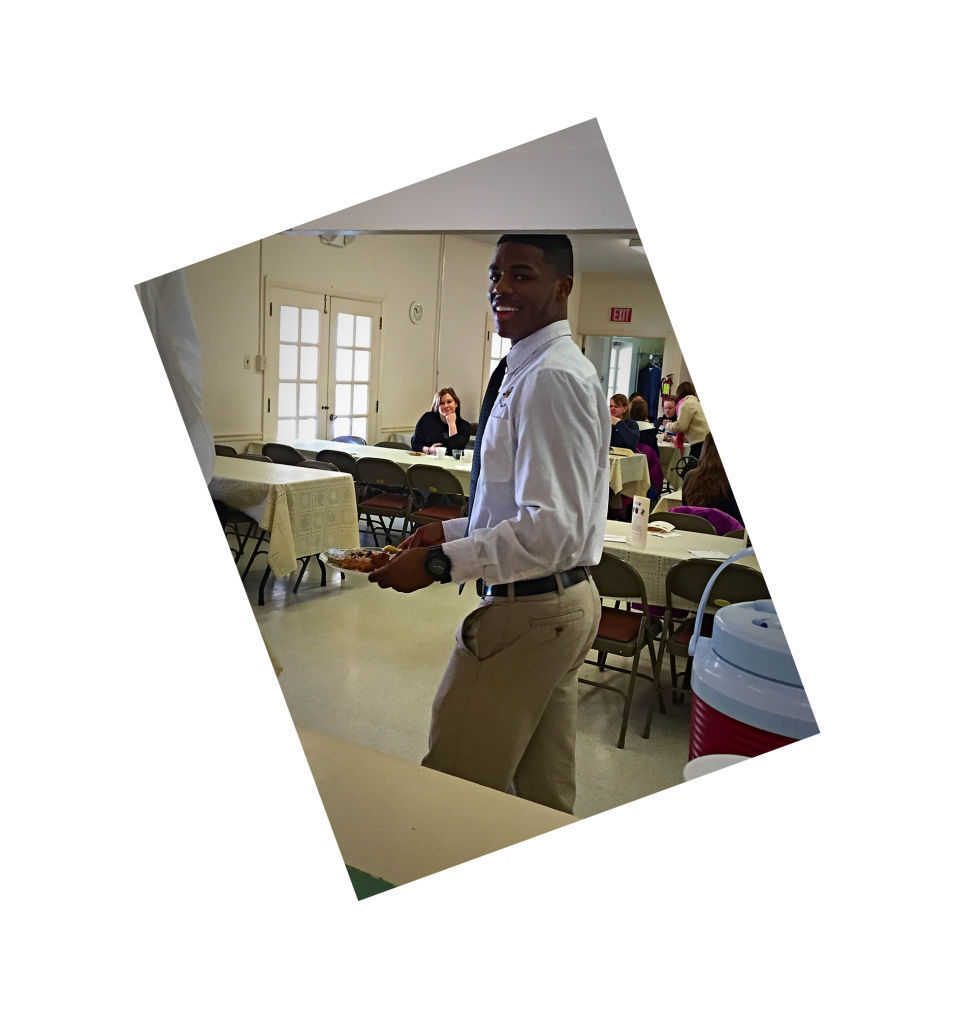 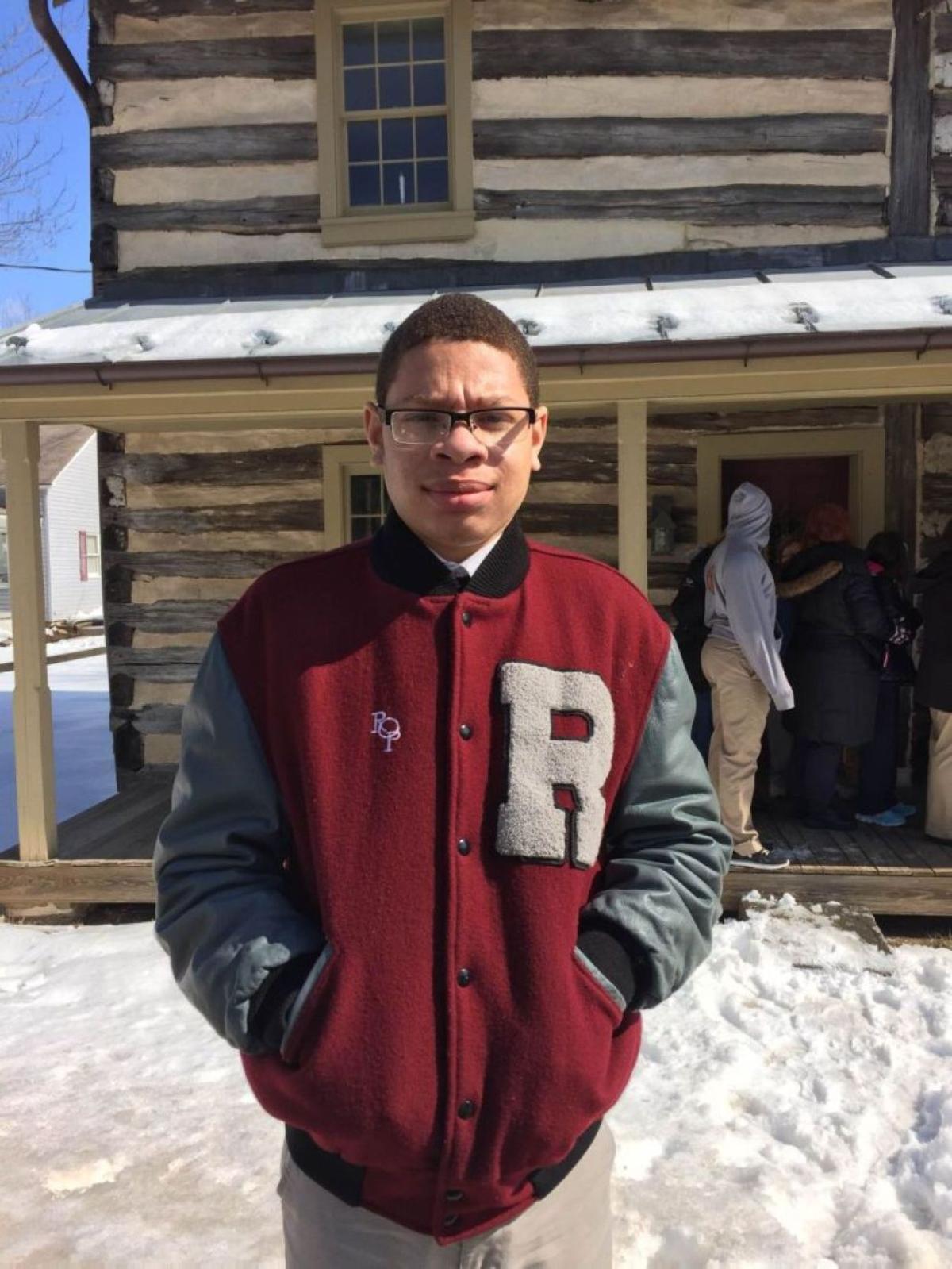 Timothy Clark, senior, nursing student, is standing in front of the house where the heritage meal was prepared last week at Catoctin Furnace. 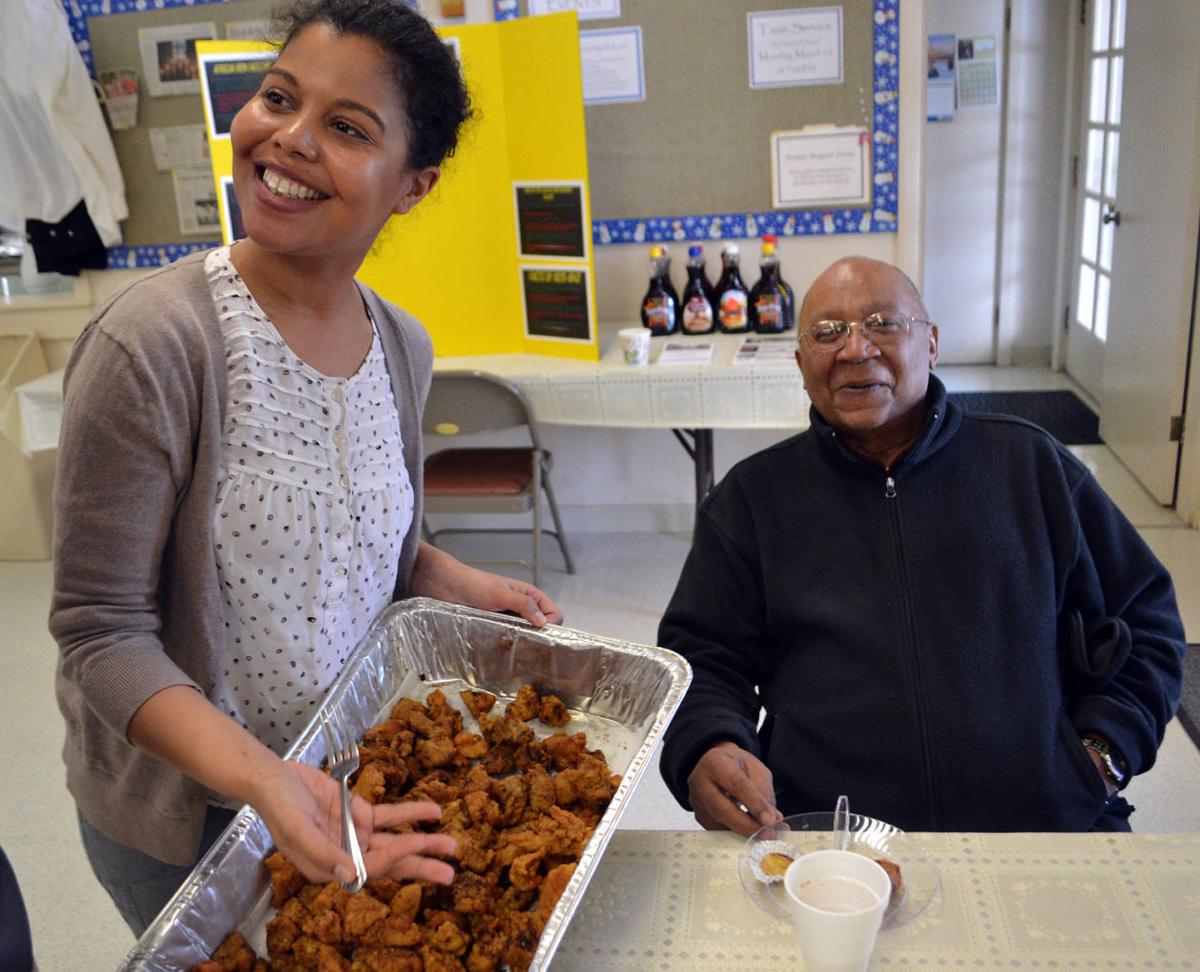 Christy Kennedy, left, history teacher at Silver Oak Academy and spnosor of the Catoctin Furnace Club, holds a tray of pan chicken during the recent Heritage Food Luncheon at Harriet Chapel. Looking on is Rick Thunder-Young of Silver Oak Academy. 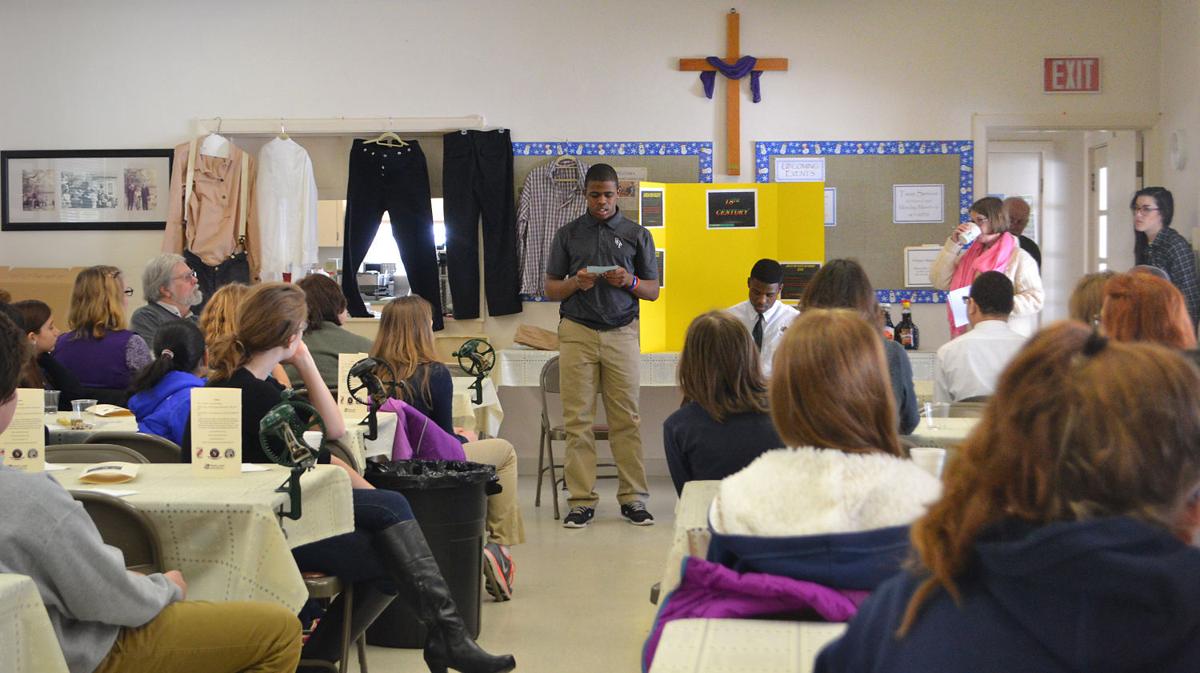 Kevin Taylor, student athlete at Silver Oak Academy, talks recently about food slaves would have eaten during the Heritage Food Luncheon at Harriet Chapel. On the tables are apple peelers. 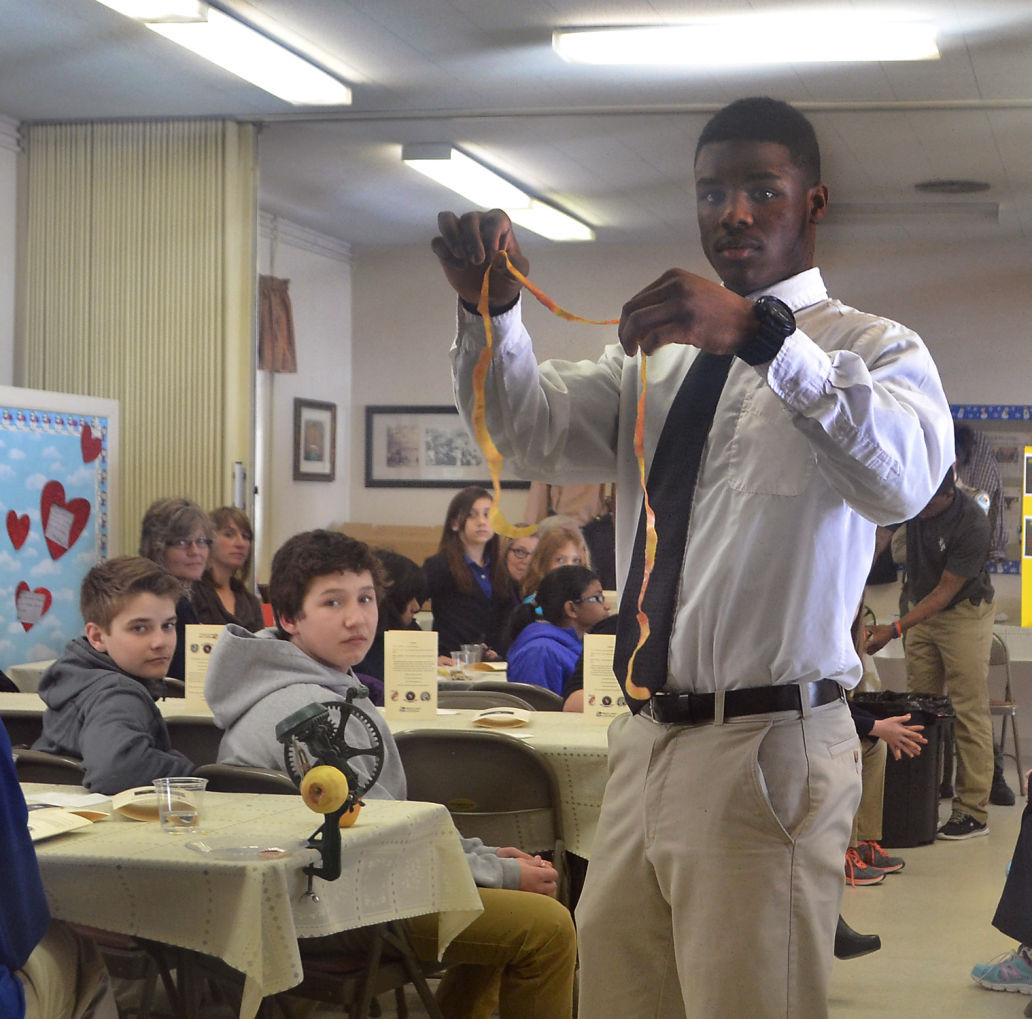 Isaiah Clark, student athlete at Silver Oak Academy, holds an apple peel from an apple he just peeled during the Heritage Food Luncheon at Harriet Chapel. 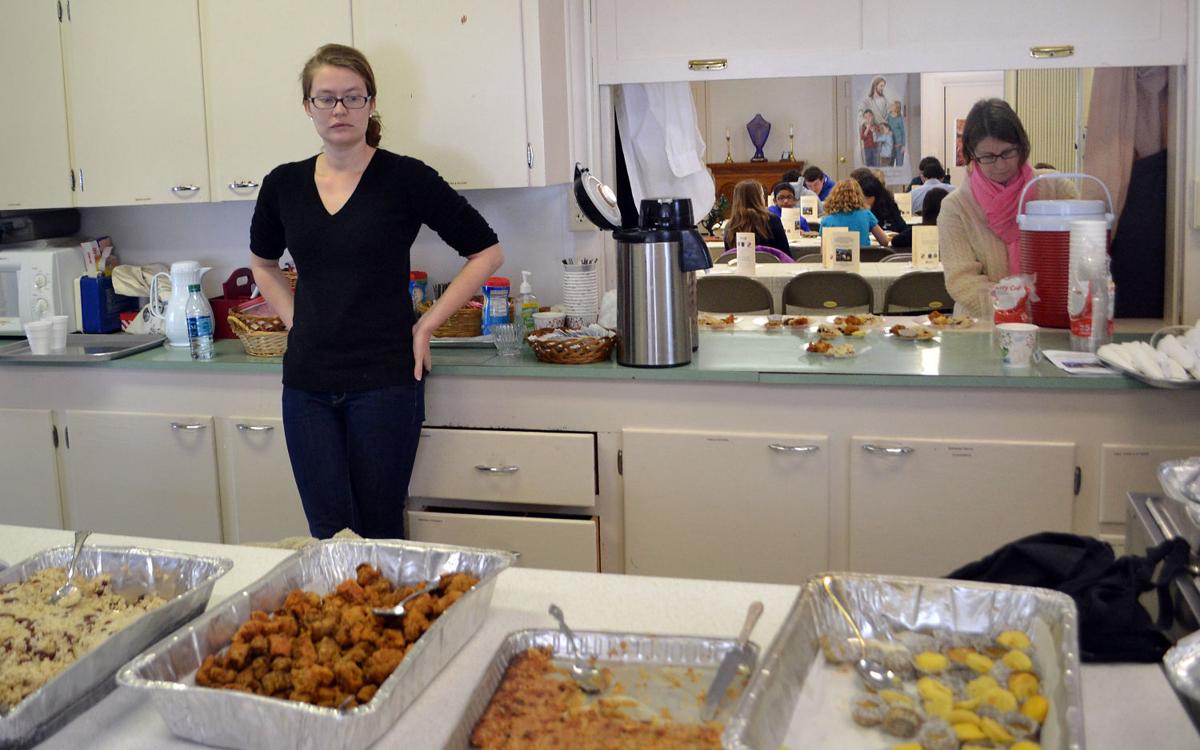 Margaret Comer, Catoctin Furnace Historical Society volunteer, is in the kitchen at Harriet Chapel with some of the specially picked food for the Heritage Food Luncheon recently.

Timothy Clark, senior, nursing student, is standing in front of the house where the heritage meal was prepared last week at Catoctin Furnace.

Christy Kennedy, left, history teacher at Silver Oak Academy and spnosor of the Catoctin Furnace Club, holds a tray of pan chicken during the recent Heritage Food Luncheon at Harriet Chapel. Looking on is Rick Thunder-Young of Silver Oak Academy.

Kevin Taylor, student athlete at Silver Oak Academy, talks recently about food slaves would have eaten during the Heritage Food Luncheon at Harriet Chapel. On the tables are apple peelers.

Isaiah Clark, student athlete at Silver Oak Academy, holds an apple peel from an apple he just peeled during the Heritage Food Luncheon at Harriet Chapel.

Margaret Comer, Catoctin Furnace Historical Society volunteer, is in the kitchen at Harriet Chapel with some of the specially picked food for the Heritage Food Luncheon recently.

I have driven by Catoctin furnace in Thurmont for many years, never really understanding the historic significance of the ruins. Catoctin Furnace Road, a little country road that runs parallel to U.S. 15 for a few miles is lined with tiny houses that I never thought of as historic. I only wondered what it might be like to live in such a miniature house, raising children. Well, thanks to the Catoctin Furnace Historical Society, the Maryland Park Service, and especially the students of Silver Oak Academy in Keymar, I enjoyed an educational tour back in time last week. The focus was on one of my favorite topics, food.

In 1776, the furnace, originally known as the Johnson Furnace, began iron-making operations. As the operations grew, so did the population. Those tiny houses were slave or worker houses. In 1827 Harriet Chapel was constructed. The hall of this historic Episcopal Church is where last week’s Heritage Food Luncheon took place. Featured foods were traditional recipes researched, selected and prepared by students at Silver Oak Academy in Keymar.

A heightened energy was in the hall as it filled with students and history enthusiasts. Comer gave me a quick overview of the collaborative relationship between the historical society, the state park, and the students.

“I’m thrilled,” Comer said, to be working with Silver Oak’s students. “Our (historical society) mission is to preserve and interpret the rich history of Catoctin Furnace. An inclusive history.” She referred to the African American history at the furnace as a “forgotten history.

“We tend to think of enslaved African Americans in the agrarian sense, working large plantations. But there was also industrial slavery,” Comer said. The furnace is an example of that history.

Silver Oak Academy is a residential high school, operated by the Rite of Passage program for at-risk young men. Students become involved in historic preservation through education, gaining opportunities they might otherwise not have. “It’s a win-win situation.” Comer said. “We pay the students for historic re-construction, yard work. They are gaining real life experiences and skills, marketable skills they can take back home.”

At Silver Oak, there’s a club for students called The Catoctin Furnace Club. Besides learning historic reconstruction, the students are also exposed to many aspects of the history surrounding the Furnace. The club, directed by Silver Oak’s history teacher Christina Kennedy, helps to enrich the social and artistic skills of the students.

Before lunch, observers enjoyed a hands-on historic apple peeling and coring lesson. In the meantime, I learned a little about each student.

Isaiah Clark’s bright smile was as engaging as his conversation. Clark, a senior, was very enthusiastic about the luncheon and presentation. Actively and publicly sharing the research and education of this project added to the experience, he said. Clark’s other love is sports, also encouraged at the school.

Next was Kevin Taylor, also a senior and an athlete. He is part of the school’s culinary program. He worried out loud, just like a chef. “The corn muffins did not rise. We didn’t use any baking soda or powder in the recipe.” Historic culinary authenticity required omitting leavening ingredients which would not have been available.

Taylor was fascinated by some of the traditions and lore surrounding the history of “soul food” such as finding a coin in a special muffin, which meant a year of good luck.

Taking a sharp detour in our conversation about food, Taylor spoke about his recent achievements and future plans. “I have my certification in construction and manufacturing. I’m working on a culinary certificate.” He said. Taylor also plans to obtain a barber certification to add to his stack of marketable skills.

“This program gets your mindset right…” Taylor said that had he stayed in Baltimore, school and an education would not have been part of his life. “I never thought I would play football for a school…and I NEVER thought about going to college,” Taylor radiated a sense of gratitude and hope. “Mostly I want to see my name in the paper for something good.”

Dawan Ginn, a freshman, sat down next. He was doing double-duty that day as photographer for the school’s yearbook as well as hosting the event. “So, you must play football,” I assumed by his muscle. “Nah, wrestling,” he corrected me.

Ginn, an avid photographer well before he arrived at Silver Oak, has enjoyed his brief stay at the academy and involvement with the history club. He also looks forward to taking his skills back home next month.

“This program has taught me to be good…taught me how to stop and think,” Ginn said when I asked if he felt ready to go back home. “I look at life from a positive perspective now…all the good I can do instead of all the bad.”

Ginn plans to go back to his home high school with a focus on culinary arts and business. “There ain’t nothing I can’t handle,” he said.

Before lunch was served I grabbed a brief conversation with Senior Timothy Jackson. As the hungry audience anticipated their heritage lunch, Jackson diligently distributed food among plastic plates. In his soft and measured voice was a definite note of excitement about his future plans in the nursing field.

Lunch was served. Pan chicken, corn bread, rice and beans, hot mulled cider and apple pudding. I expected bland, uninteresting food, spiced only with salt and pepper, and a little cinnamon and nutmeg in the dessert. Spices were sporadically available and highly prized during those days. But, I was pleasantly surprised. The food was rich and flavorful. Lots of butter and fat. Lots of salt and a cooking method that resulted in a very basic but quite satisfying texture.

Slaves would prepare large amounts of food and then graze throughout the day while working to maintain needed energy. Fried chicken most likely became a staple because the cooking method preserved the food. The meat could be carried in a pocket throughout the day or left out on the counter for several days without spoiling.

Food for the workers was prepared in those tiny little homes over a fire in the hearth. Kettles and a pan known as a spider pan were the tools used for cooking over the open flame. By 1830 most homes had the “luxury” of portable cooking stoves.

“If you notice, most of the food you’re enjoying today is made with corn,” Comer said. Corn was a staple of early Americans, grown in Frederick County in huge quantities. A simple food that slaves often ate were ash cakes made from a combination of cornmeal, salt and water. Adding a dab of lard and wrapping the cake in a cabbage leaf made the bland meal a little more palatable.

After our tasty history lesson our large group was treated to a tour of one of those tiny homes. On the chilly day of our tour the thought of hot glowing embers burning continually in the heart of the home seemed like a wonderful cozy environment. In the sweltering heat of summer, not so much.

Park ranger Alicia Norris led our group down a path to the furnace. Along the walk, Norris painted a picture of the industrial town and what life was like in those days.

Beat egg yolks in a large bowl; add sugar, flour, and butter. Beat together then add apples. Fold in stiffly beaten egg whites. Pour into a buttered oven dish and sprinkle with spices. Bake in a moderate oven until golden brown and crispy on top.

Kerri Eiker is a free-lance writer who lives in Braddock Heights.

For more information on the park, the historical society, the church and silver oaks academy visit their websites. www.catoctinfurnace.org www.silveroaksacademy.com www.harrietchaple.com www.dnr.maryland.gov/plw/cunninghamfalls.html