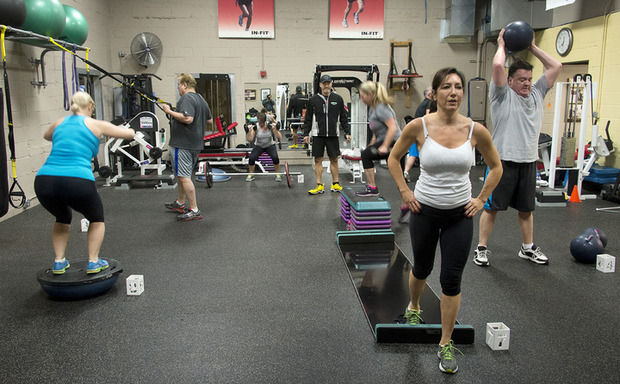 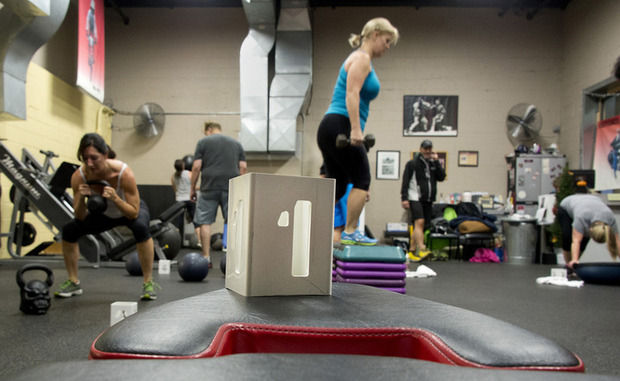 Eight clients work out at 1 of 10 stations marked by plastic cubes during a recent early morning workout session at In-Fit Studio in Frederick. Staff photo by Sam Yu 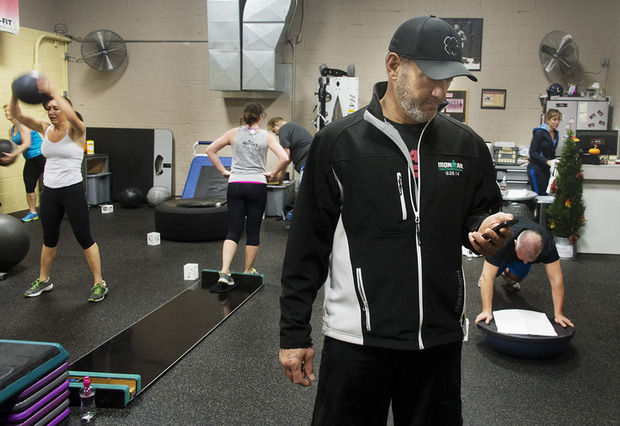 Kip Jawish of In-Fit Studio times his clients as they cycle through 10 stations during a recent early morning workout session. Staff photo by Sam Yu 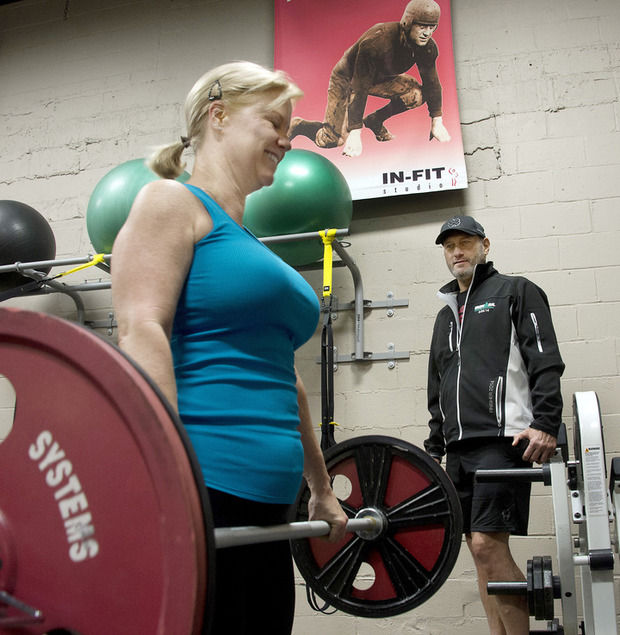 Kip Jawish of In-Fit Studio looks on as Beth Beam lifts weights at one of 10 stations during a recent early morning workout session. Staff photo by Sam Yu

Eight clients work out at 1 of 10 stations marked by plastic cubes during a recent early morning workout session at In-Fit Studio in Frederick. Staff photo by Sam Yu

Kip Jawish of In-Fit Studio times his clients as they cycle through 10 stations during a recent early morning workout session. Staff photo by Sam Yu

Kip Jawish of In-Fit Studio looks on as Beth Beam lifts weights at one of 10 stations during a recent early morning workout session. Staff photo by Sam Yu

Even on days when snow has just blanketed the ground or the skies are a gloomy gray, Gerry Hicks said she makes a point of getting outside.

She puts on her hiking boots, snowshoes or skis and hits the hills, streets or slopes, she said.

'It's invigorating," said Hicks, owner of The Trail House in downtown Frederick.

A blustery winter day doesn't have to be a lazy one, but, for many, that's often what it becomes, according to local fitness enthusiasts and experts.

Faced with short, frigid days and a packed holiday schedule, and surrounded by ample holiday goodies, local personal trainers say their clients have a hard time staying motivated to work out during the winter.

The average adult gains an average of one pound from October to February, and doesn't lose that extra pound, according to a report in The New England Journal of Medicine. This contributes to the overall increase in weight in adulthood, the report found.

Trainers recommend different strategies for how to stay motivated for different clients, depending on what works for them, but they said the strategy that works for everyone is finding someone who will hold you accountable for your workouts.

Finding someone you can work out with is one way to go about it, said Greg Tymon, owner of Primed Fitness in downtown Frederick.

"So you can lean on another person," Tymon said.

Tymon admits that he may be biased, as of course he wants more people to come into his personal training studio, but he added that your workout buddy doesn't have to be a trainer.

"Any kind of group activity," he said, mentioning the volleyball league in Frederick. "It's just more fun when you have people to share it with."

Every Monday, Wednesday and Friday at 5:30 a.m. sharp, Liz King knocks on one of her client's doors.

They go down to the basement and King leads her client through a circuit workout.

King said her client tells her that this is the only way she will get out of bed to work out.

"She knows she has to get up, because I'm there," King said.

King agrees with Tymon that the person providing the accountability doesn't need to be a trainer.

"Choose the girlfriend who will say, 'let's go to the gym,' rather than 'let's go get margaritas,'" she said. Liz King is a personal trainer and life coach, and she owns Coaching Her in Frederick.

Here are a few tips from local experts on how to stay moving:

The gym offers a variety of workout classes and fitness groups so that people can choose what fits them, or try something new, Majerowicz said.

Another way to stay motivated, he said, is to buy some new workout gear that you will be excited to wear, such as new shoes or a new shirt.

Creating a new playlist to listen to while working out out also helps, he said.

Kip Jawish, owner of In-Fit Studio in Frederick, said people who are motivated by competition should set their eyes on an event at the end of winter.

"I sign up for a race in early spring so that motivates me to train all through the winter," he said.

King encourages her clients to commit to a race that benefits an organization, as it is motivation to get in shape not just for yourself, but for others.

"Something that will drive them when they just aren't feeling it," she said.

Sometimes, small goals are best, because they aren't as intimidating, Majerowicz said.

To keep indoor workouts interesting, mix up your routine and do small bouts of cardio, Jawish said.

If you are bored on the treadmill, do 10 minutes and then switch to the elliptical, and move to as many pieces of equipment as you can, he said.

A circuit workout is also an indoor favorite, and can be done in your living room, with exercises such as push ups, pull ups and burpees, he said.

Workout videos can also be done in small spaces with minimal equipment, he said.

The small group boot camps at In-fit are great for people who want a good workout, he said, but who don't want to think about it.

4. Layer up and get outside

Hicks tells her customers not to be afraid to step out in the cold.

"I think people sell winter short because it is cold and dreary," Hicks said, "but it's not."

The key is staying dry and warm with essential outerwear, Hicks said. This means a good base layer of long underwear, with a fabric that will wick sweat away, a mid layer of wool or fleece, and an outer layer. A hat and gloves are also important, she said.

Tymon said he has running snowshoes that he looks forward to using in Baker Park.

"I get an incredible workout," Tymon said.

If all else fails, and there is no motivation to work out, Tymon said, then just try to eat less.

"The one thing I tell clients is if they can't get inspired to work out as much, they have to cut back on their intake, because that is where people tend to gain weight, when they are stuck inside and eating out of boredom."

As recommended by Greg Tymon, owner of Primed Fitness.