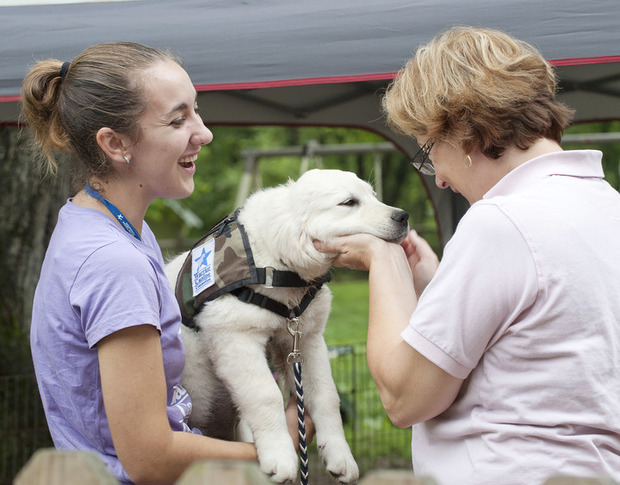 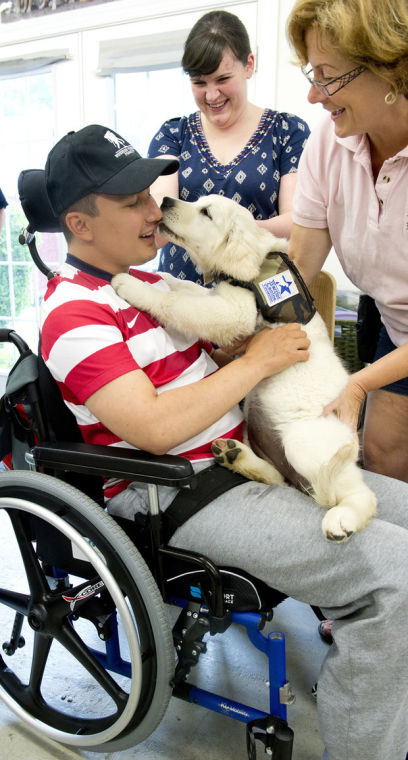 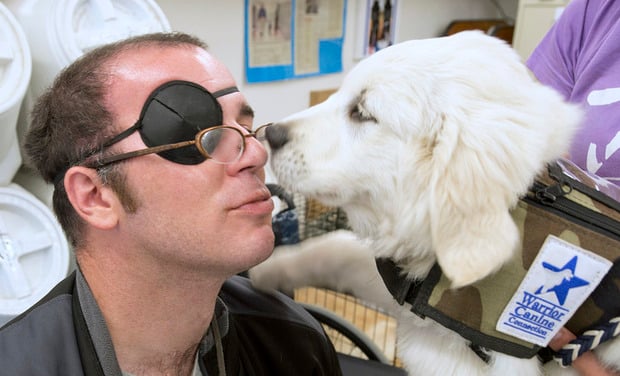 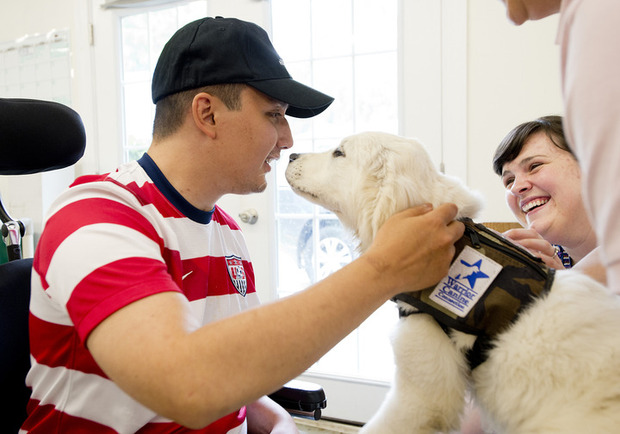 Wounded Warrior Jonathan Kohl gets some attention from Breeze, a pup in training, during his recent visit to Warrior Canine Connections. He is with his wife, Aileen Kohl. Staff photo by Bill Green 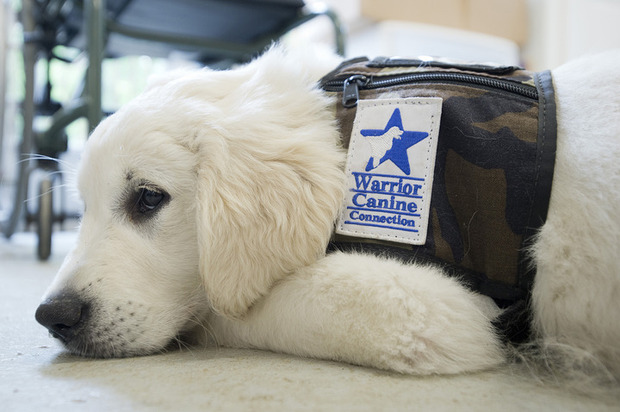 Goldie takes a break from her visit with the Wounded Warriors. Staff photo by Bill Green 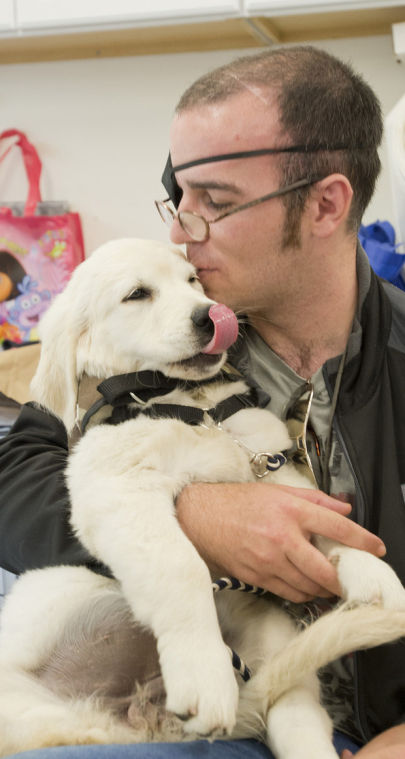 Wounded Warrior Justin Bunce gets a kiss from Lilly while visiting the Warrior Canine Connection center. The program helps veterans ease anxieties brought on in by service in war zones. Some veterans also become volunteers, training the puppies to help other veterans. Staff photo by Bill Green 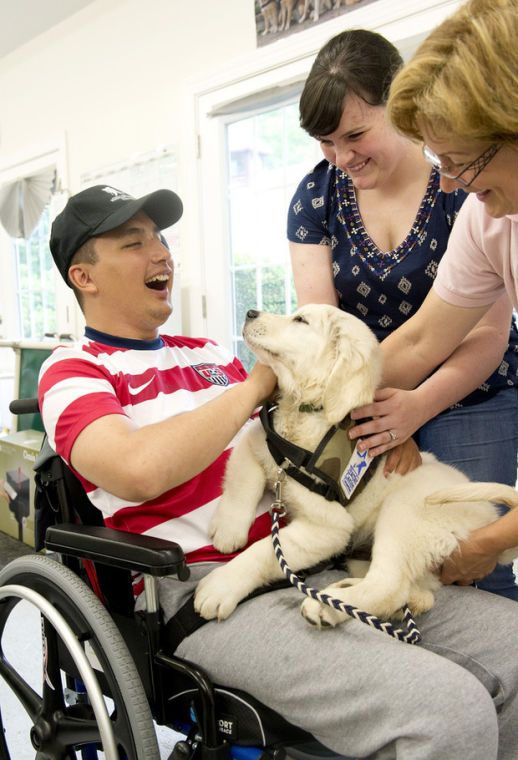 Wounded Warrior Jonathan Kohl gets some attention from Breeze, a pup in training, during his recent visit to Warrior Canine Connections. He is with his wife, Aileen Kohl. Staff photo by Bill Green

Goldie takes a break from her visit with the Wounded Warriors. Staff photo by Bill Green

Wounded Warrior Justin Bunce gets a kiss from Lilly while visiting the Warrior Canine Connection center. The program helps veterans ease anxieties brought on in by service in war zones. Some veterans also become volunteers, training the puppies to help other veterans. Staff photo by Bill Green

A cold wet nose and wagging tail have given many a sad or weary heart a lift.

But seeing his dog Gabe ease the anxiety of an 11-year-old boy who was leaving his mother and moving into foster care gave social worker Rick Yount an idea.

That led Yount and Gabe, a pup given him by friends who had fought in Operation Desert Storm, to embark on the golden retriever’s work as a certified therapy dog.

Twelve years later the gift came full circle when Yount started a program using dogs like Gabe to help veterans recover from the psychological and physical wounds they suffered in war.

From its start at a U.S. Department of Veterans Affairs medical center in California in 2008, the program expanded to serve warrior transition units at Fort Belvoir in Northern Virginia and at Walter Reed National Military Medical Center in Bethesda, as well as the National Intrepid Center of Excellence at Walter Reed.

Soon the nonprofit that evolved, and has been named Warrior Canine Connection since 2011, will move its “Healing Quarters” to the Schaeffer Farm portion of Seneca Creek State Park west of Germantown.

Yount, who is Warrior Canine Connection’s executive director, said he hopes the program will be able to move to the Schaeffer Farm within a year.

WCC’s current base in Patuxent State Park near Brookeville also is close to key program sites in the National Capital area, but the group’s new 25-year lease at Schaeffer Farm will provide growing room for WCC to offer art, music, gardening and equine therapy, as well as acupuncture to veterans — along with the service dog program.

The move to Seneca Creek State Park will shorten the trip for veterans who commute from a residential neurorehabilitation treatment center in Germantown to help Warrior Canine Connection staff and volunteers train golden retriever and Labrador retriever puppies for service dog work.

When people ask, said Katie Gorman, a brain injury specialist and lead life skills trainer at NeuroRestorative’s residential center in Germantown, to explain dog therapy, “I tell them ‘watch — you’ll get it,’” she said.

Talking to a reporter during his visit with WCC’s latest litter-in-training, Marine Corps veteran Justin Bunce, who lives at NeuroRestorative’s Germantown center, grimly recalled details of his deployments, including how he and his comrades shaved with axle grease and knife blades.

They did that, Bunce said, to prevent stray whiskers from creating gaps that could let toxins infiltrate the chemical warfare suits they wore in Iraq where “sand turns the place into a convection oven.”

After his wounds sent him back to the United States, Bunce balked at doing exercises to help his now mostly metal left hand. But he readily does whatever Navigator — or “Navi” as he calls the affectionate golden retriever who lives with him and other vets at the NeuroRestorative house — needs.

Folks rehabilitating from grave injuries often don’t respond well to a human being telling them what they should do, Gorman said.

“But when a dog says ‘Take me out, I have to pee or I’ll have an accident,’ they do,” Gorman said.

Bunce smiled and laughed as he recalled how worried he became once when Navi was “giving him kisses” and he felt her shaking.

“I thought she was having seizures,” said Bunce, who had some seizures after his head injury.

Quickly he realized that Navi’s shaking wasn’t caused by a seizure, but by a boisterous young retriever named Breeze who was pulling Navi’s tail, he said.

Service dogs do more than get veterans who are dealing with post-traumatic stress and brain injuries back into the community and help them feel positive emotions.

As veterans who have suffered so much take on the role of teaching dogs that “the world is a safe place,” they also “must convince themselves,” Warrior Canine Connection explains on its website.

When they soothe and reward dogs startled by a loud noise, such as a car backfiring, they work past their conditioned reactions and focus on helping the dog help a fellow veteran.

Warrior Canine Connection service dogs start training as puppies and are often named for honored warriors, including those who died of combat wounds.

Working with a dog named for a fallen veteran can be healing, Yount noted, adding that the program tries to maximize each dog’s therapeutic value.

The program uses only golden retrievers and Labrador retrievers and gets them from breeders who have a record of producing dogs who have the right temperament and tend to live long healthy lives.

“We find that, with what we do, the dog is the key variable and we want to manage that as much as we can,” Yount said.

Dogs provided by Warrior Canine Connection not only have touched the lives of veterans but of others who have watched the dogs or worked with them, said Tina Trail, a WCC volunteer from Frederick.

“Nobody knows what they (the veterans) have been through and nobody will know those depths except those dogs,” said Trail, a volunteer “puppy petter” who has helped socialize puppies new to the program.

Those service-dogs-to-be often can be seen via a “puppy cam” link at www.warriorcanineconnection.org.

“I’m looking forward to helping them rebuild it,” Trail said.

The cost of building facilities that will fit Warrior Canine Connection’s plans to expand at Schaeffer Farm have been estimated at about $1.4 million, Yount said.

A recent $850,000 grant from the Bob and Renee Parsons Foundation, plus an added pledge challenge from the foundation to match up $300,000 in donations, has gotten the effort off to a fast start.

Also aiding the effort is a $75,000 grant from Montgomery County and donations from several businesses, including plumbing.