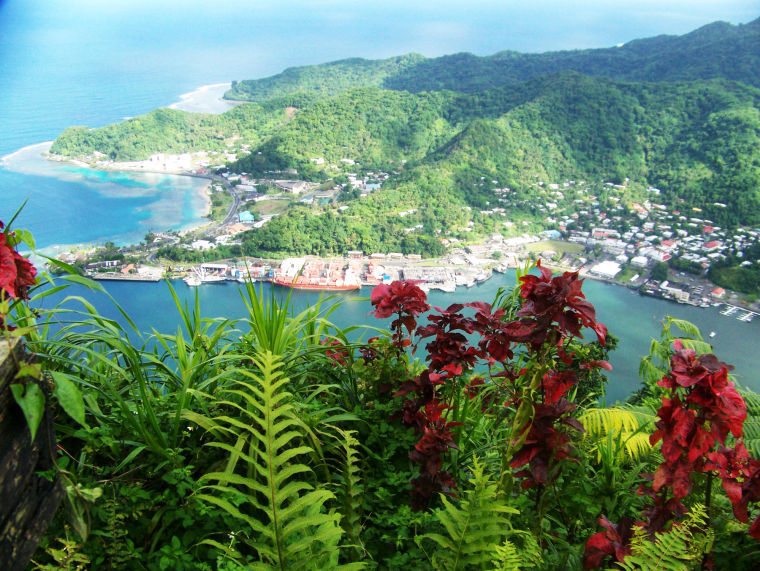 Pago-Pago as seen from Mount Alava. 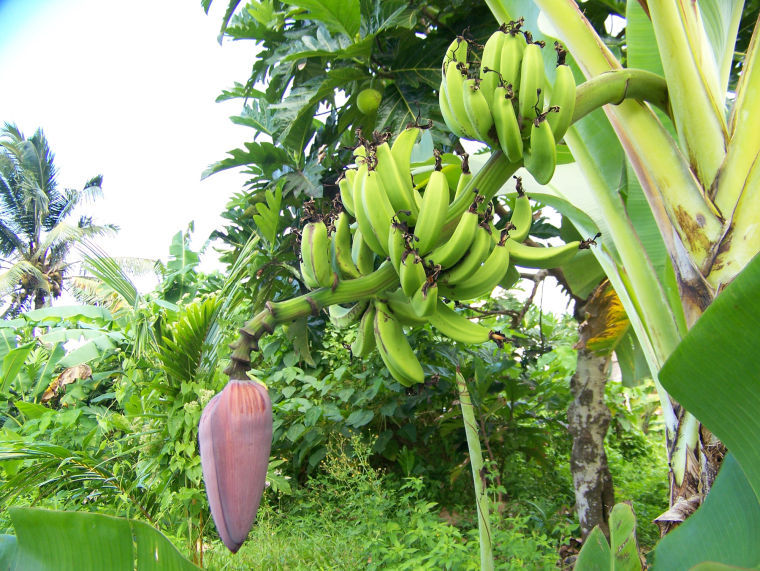 Banana tree with flower, a favorite food of the “flying fox." 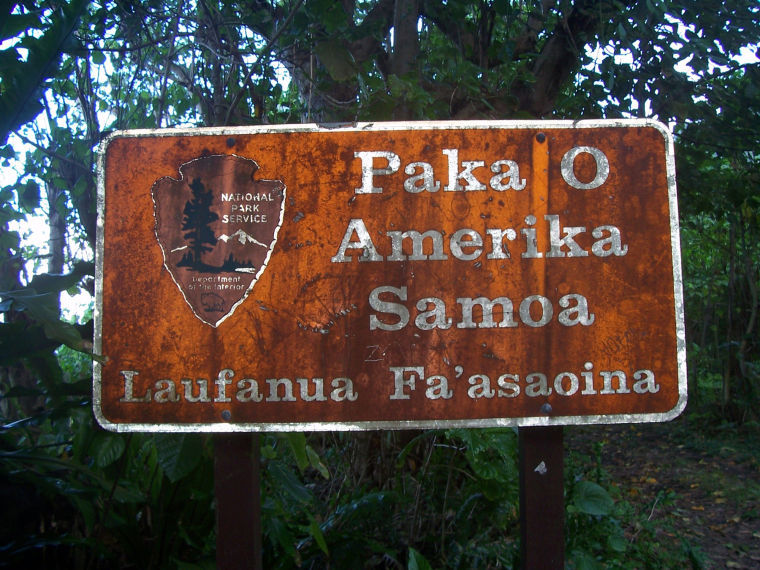 This sign indicates the visitor is in the National Park of American Samoa, Laufanua Fa'asaoina district. 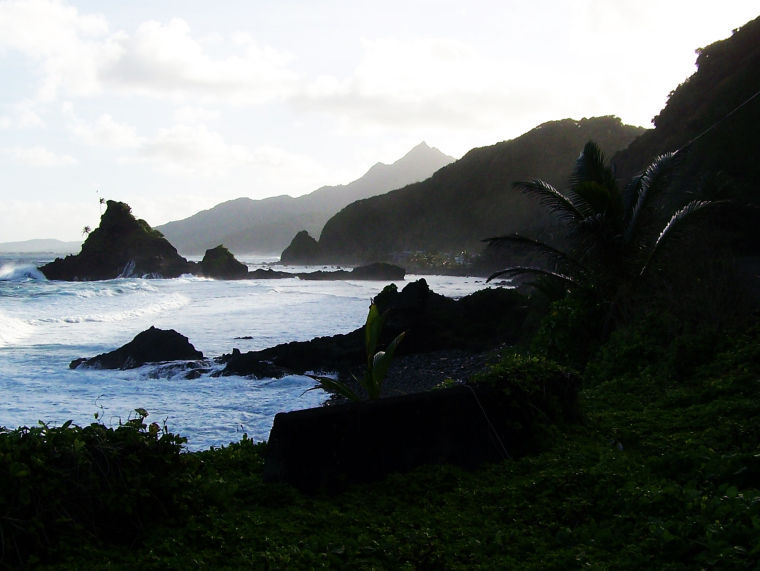 This is the rugged coastline of Tutuila, Main island of American Samoa. 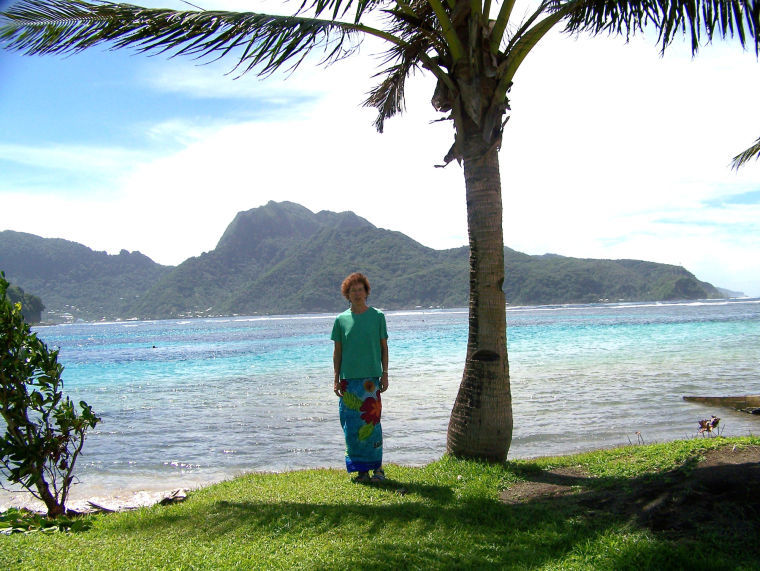 The author's wife, Nancy Farrell, wearing puletasi, a traditional garment of Samoan women with Mount Pioa, “The Rainmaker,” in the background. 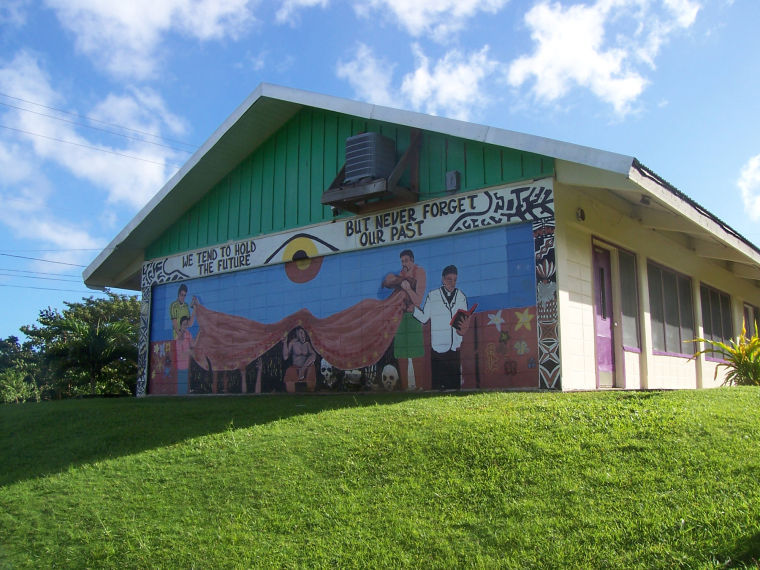 High school on Ta’u island near Luma village where Margaret Mead did her research.

Pago-Pago as seen from Mount Alava.

Banana tree with flower, a favorite food of the “flying fox."

This sign indicates the visitor is in the National Park of American Samoa, Laufanua Fa'asaoina district.

This is the rugged coastline of Tutuila, Main island of American Samoa.

The author's wife, Nancy Farrell, wearing puletasi, a traditional garment of Samoan women with Mount Pioa, “The Rainmaker,” in the background.

High school on Ta’u island near Luma village where Margaret Mead did her research.

American Samoa is 76 square miles, spanning five volcanic islands in the South Pacific. This tropical paradise has an average temperature of 82 degrees, and unique flora and fauna. The National Park of American Samoa is the only U.S.-owned national park in this part of the world. There are challenging and dramatic hiking trails to historic sites, secluded beaches and villages.

Nancy and I were hiking the trail to the crest of Mount Alava on the island of Tutuila in the National Park of American Samoa. The difficulty was only moderate because a crew clears vegetation that impedes the trail to maintain the TV transmitter on the peak.

Halfway up a large furry creature with a wingspan of about 3 feet flew over our heads. Of course he was gone before I got out my camera. A few minutes later we met Rick, a Californian who settled in American Samoa coming up the trail on a mountain bike. Rick explained that the creature is called a flying fox but it is actually a fruit bat. Over-hunting has made it an endangered species but Mount Alava is among the few places it is often seen.

The view from the crest was stunning. Below are Pago-Pago, one of the world’s beautiful harbors, Fagatogo, the capital of American Samoa, and nearby Mount Pioa. Mount Pioa is called “The Rainmaker” since it snags moisture-laden clouds, making Pago a rainy town. In 1916 the writer W. Somerset Maugham was forced to stay in Pago through the rainy season because of a quarantine. This inspired his short novel “Rain” featuring the temptress Miss Sadie Thompson. Five Hollywood directors created films of the story with actresses ranging from Gloria Swanson to Rita Hayworth.

Although both the Visitors Center and Headquarters of the National Park of American Samoa are on the island of Tutuila, the park extends to two less populated islands, Ta’u and Ofu.

Both are about 30 minutes away by small turbo prop aircraft. Ta’u is important in Samoan myth, which holds that all Polynesians are descendants of the first settlers who arrived at Saua, which they consider sacred. Ta’u has some of the world’s highest sea cliffs on the south side of the island, as well as Lata Mountain. At 3170 feet, Lata Mountain is the highest point in American Samoa. We climbed Lata but could not have done so without a guide to show us the route through the vegetation. Fortunately there are no poisonous snakes in Samoa.

Margaret Mead arrived at the village of Luma on Ta’u in November 1925 to do research for her doctoral dissertation. In 1928 she published it in a less academic format titled The Coming of Age in Samoa. Although criticized by some scholars, it was enormously popular with the public. Coming of Age became the best selling book in anthropology and has been in print for over 80 years. Sadly, population on Ta’u has been dropping in recent years as people have been leaving rural areas to work for wages in cities.

Ofa, near Ta’u, is another island containing some of the National Park of American Samoa. It has a wonderful beach of fine white sand. When the park was being constructed, local people warned the planners to avoid the beach at To’aga which is near the ajoinning island of Oosega because of evil spirits, or aitu. The belief in aitu continues to be strong in Polynesia.

If you have daydreams of becoming another Indiana Jones, American Samoa is an archeological treasure trove. The primary tool for cutting wood for building and carving statues in Polynesia was the adz, similar to the hatchet but with the blade at a right angle to the handle.

Recent discoveries show that the mountainous ridge along the crest of Tutuila contains a particularly stong form of basalt. This was mined to make adz blades which were formed, polished and traded throughout the Pacific in ancient times. Blades from Tutuila have been found as far away as the Solomon Islands.

American Samoa, with a population of fewer than 60,000, is an unincorporated territory of the U.S. similar to Puerto Rico. The other Samoa is an independent country which was governed by New Zealand until 1962. The Samoans in American Samoa and independent Samoa are similar. Ethnically, the local inhabitants are the same people. They speak the same language, their cultures are alike and there is a fair amount of intermarriage between the two groups. At the same time there are enormous differences between the two groups of islands.

Both Samoas are located a bit east of the international date line, although Samoa is closer. In December 2011 Samoa arbitrarily declared its location to be west of the date line putting the country on the same business day as Australia and New Zealand. As a result a Friday in Samoa disappeared.

Another difference is in the police. In American Samoa policemen are dressed like the those in any American city: dark blue uniforms with a substantial belt to carry a pistol, handcuffs and other tools of the trade. In Samoa the police do not carry guns except during special operations and they wear the lava-lava, a kilt-like garment traditional among Samoan men.

Despite the differences both island groups have delightful tropical climates with the majority of their populations of Polynesian descent.